Kuwait's Health Ministry says anyone caught may get three months in prison, while Qatar says maximum penalty is three years Kuwait and Qatar both said on Sunday that they would start jailing people or fining them thousands of dollars for failing to wear face masks in public to combat the novel coronavirus.

Kuwait's Health Ministry said anyone caught may face as many as three months in prison, while Qatar state TV reported the maximum penalty there would be three years.

The six Gulf states have reported a total of more than 137,400 infections with 693 deaths from the virus. Cases in the region were initially linked to travel, but later saw a spread among low-income migrant workers in cramped quarters.

Saudi Arabia, with a population of about 30 million people, has the highest count at more than 54,700 cases with 312 deaths.

A recent surge in infections has prompted the Saudi government to re-impose a 24-hour curfew across the entire country during the five-day Eid al-Fitr holiday at the end of May in a bid to contain the resurgent epidemic.

"A total curfew will be imposed in all cities and regions across the Kingdom," from 23 May until 27 May, the Saudi Ministry of Interior said in a statement carried by the Saudi Press Agency last week.

Qatar, a nation of only about 2.8 million, has the second-highest infection count at more than 32,600, with 15 deaths.

The cabinet mandated the wearing of face masks "upon leaving the house for any reason" except when "alone while driving a vehicle", the Qatar News Agency reported last week.

Kuwait has 14,850 cases with 112 deaths, according to Worldometer’s tally.

The United Arab Emirates has the second-highest number of Covid-19 deaths among the six states at 220. It has reported more than 23,350 cases. 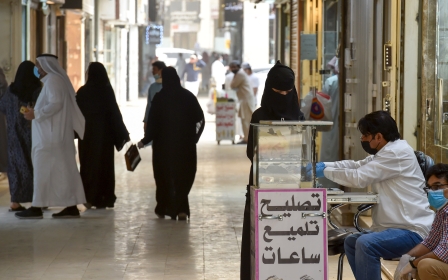