Airlines around the world, including the Middle East, have cancelled hundreds of flights in the wake of the coronavirus outbreak.

The United Arab Emirates (UAE), a major air transit centre, said on Monday it would halt all passenger and transit flights to and from the country for two weeks. Cargo operations and emergency evacuations will continue.

In addition, foreign airlines will no longer be allowed to land or transit through Dubai, Abu Dhabi or any other airport in the UAE.

Middle East Eye looks at the state of operations for the major airlines in the region.

Air Arabia has said it will stop all passenger operations from 25 March for two weeks.

The decision follows an announcement on Monday from the National Emergency Crisis and Disaster Management Authority and the General Civil Aviation Authority to suspend all inbound, outbound and transit passenger flights in the UAE.

Israel's El Al announced on 12 March it would phase out operations on most of its routes from 15 March.

The exceptions were New York Newark, Toronto, London, Paris and Johannesburg. It usually flies to 40 destinations from Tel Aviv.

UAE-owned Emirates, one of the world's biggest long-haul airlines, has said it will stop all passenger operations from 25 March, except for repatriation flights to some 13 countries.

Emirates said on Sunday it would cut staff wages by as much as half because of the coronavirus impact on travel demand.

The Dubai-based carrier had already announced the suspension of nearly 70 percent of its network of 159 destinations, asked staff to go on unpaid leave and frozen recruitment as the industry faces one of its biggest ever challenges.

It operates a fleet of 270 aircraft, mostly Airbus A380 and Boeing 777 passenger jets.

The decision relates to the suspension of all inbound, outbound and transit passenger flights in the UAE.

The airline told staff on Monday that from April it was temporarily cutting management wages by 50 percent and other staff salaries by 25 percent due to the impact of the coronavirus on its business, two sources familiar with the matter told Reuters.

The airline had already suspended flights to dozens of destinations because of the virus.

Fly Dubai has said it will stop all passenger operations from 25 March for two weeks.

The decision follows an earlier announcement on Monday from the National Emergency Crisis and Disaster Management Authority, and the General Civil Aviation Authority to suspend all inbound, outbound and transit passenger flights in the UAE.

The airline, which has been loss-making for years, began operating flights to just 13 of its 49 destinations from last Wednesday until the end of the month.

It continues to fly to London, Frankfurt, Paris and Dubai and nine other cities. The airline does not operate domestic services.

While Qatar now denies entry to non-citizens, and requires Qatari nationals "to enter quarantine for a period of 14 days", transit passengers, who make up the vast majority of users, are still allowed to transit through Doha's Hamad International Airport, "subject to entry restrictions at their final destination".

Qatar Airways has said it will trim its flights to Australia and the rest of the world across April and May 2020, while also grounding most of its 10 Airbus A380s.

The airline's Airbus A380s have been withdrawn from all flights to Australia, Paris and Frankfurt, and most flights to London.

Qatar's daily Sydney-Doha Airbus A380 will switch to an Airbus A350-1000 from 1 April, with the Doha-Sydney-Canberra service cancelled from 2 April, bringing Sydney-Doha back to a single daily flight.

Adelaide's daily Doha service has been cancelled with immediate effect, and will remain off Qatar's network map until 1 June, when schedules show an Airbus A350-1000 returning five days a week.

Doha to Heathrow flights drop from six flights a day to two across April and May, while all flights to Gatwick have been cancelled from 23 March through to the end of May, with June seeing a return to two flights per day.

Paris also goes from three flights a day to two, and loses both of its A380s in the process.

Saudi Arabia Airlines suspended all international flights to and from the kingdom for two weeks starting 15 March.

The airline suspended all domestic flights for two weeks from 21 March.

Turkish Airlines will halt all its international flights as of Friday, except those to Hong Kong, Moscow, Ethiopia, New York and Washington, amid the coronavirus outbreak, its chief executive said on Sunday.

"Although they will decrease, our domestic flights will continue," Bilal Eksi wrote on Twitter.

The carrier was not using 85 percent of its planes, its board chairman said earlier on Sunday. 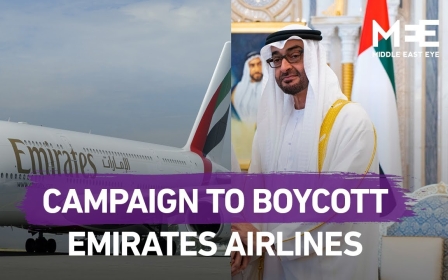