Coronavirus in the Middle East and North Africa: What do we know so far? 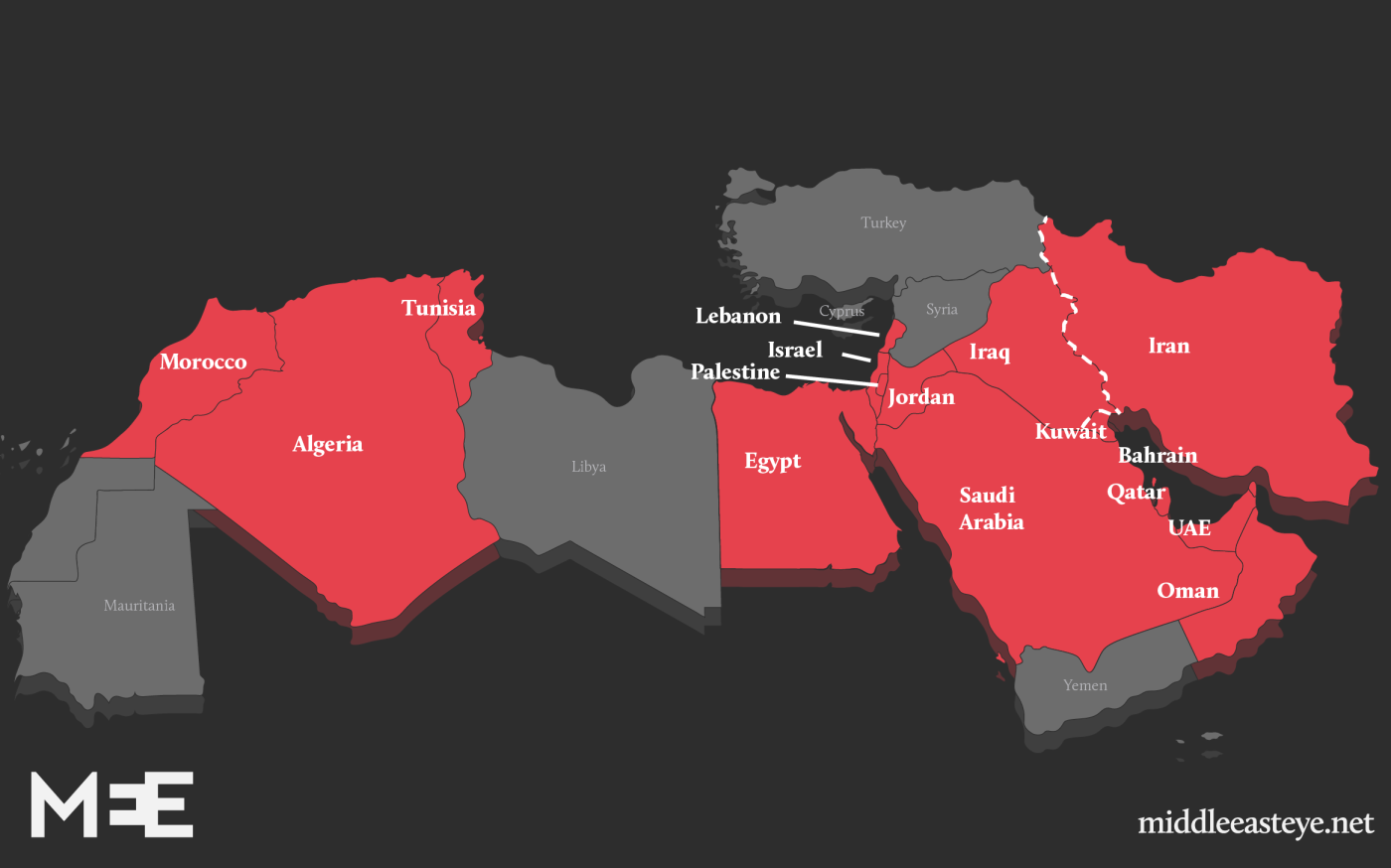 The coronavirus has swept across the Middle East and North Africa with nearly every country in the region confirming cases of the new virus.

The outbreak of the virus - officially known as COVID-19 - originated in China in December 2019, where it has reportedly killed more than 2,940 people. Worldwide deaths are reported at more than 3100, according to the World Health Organisation.

Outside of the MENA region, cases continue to grow in China, South Korea and Italy, with the latter becoming the epicentre of the virus in Europe.

Here's a breakdown of what we know so far, which countries have been affected, and how different states across the region are battling the rapidly spreading virus.

Editors note: Details and graphics in this article were accurate at 12:00 GMT on 4 March

What is the new coronavirus?

The COVID-19 virus is an infectious disease that is a member of the coronavirus family. This virus like other coronaviruses came from animals.

WHO reported in February that 80 per cent of COVID-19 cases report only mild, flu-like symptoms, and just 2 per cent of cases have resulted in death. While COVID-19 has a much lower death rate than epidemics of similar viruses such as SARS or MERS, it has spread far wider.

Locally, the coronavirus has also shone a light on the healthcare systems of countries across the region, with fears mounting over a mismanaged response to the new outbreak.

What is MERS and is it similar?

The Middle East Respiratory Syndrome, or MERS, is a viral respiratory illness that emerged in 2012 and is part of the coronavirus family of viruses.

MERS is believed to have come from an animal source, like coronavirus, and was first discovered in the Arabian Peninsula, according to the US Centre for Disease Control and Prevention.

Researchers believe the illness originated from camels. Individuals who contract the disease are likely to to suffer from fever, cough, and shortness of breath.

Saudi Arabia and other affected countries managed to contain MERS without it spreading worldwide as coronavirus has.

Which countries have been affected by the coronavirus?

The virus has spread at a rapid rate in the last two weeks. The first case in the region was recorded in the United Arab Emirates from a Chinese family transiting the country. Cases then began appearing in Iran and countries bordering it.

Soon it spread to other countries from individuals travelling from China, Italy and South Korea.

How has coronavirus spread across the region?

The reasons behind the fast spread of the virus in the region are still unclear but a large number of cases have come from people who have visited the Iranian city of Qom - the seventh largest city in Iran and one of the holiest cities for Shia Muslims.

Other cases have come from individuals who have visited Italy, where infection rates have increased at a considerable rate over the last month, and China, where the virus was first discovered.

How many people have been infected by the new coronavirus?

The vast majority of cases have been recorded in Iran with cases growing in neighbouring countries.

What are countries doing to stop the spread of coronavirus?

Different countries have adopted various measures to counter the coronavirus. Countries bordering Iran, the worst affected country in the region, have closed their borders with the Islamic Republic.

Kuwait, Lebanon, Oman and Turkey have suspended all flights to Iranian cities and Israel's national air carrier, El-Al, has stopped flights to Italy.

Saudi Arabia, meanwhile, took the drastic step of banning its citizens, residents, and foreigners from visiting the holy cities of Mecca and Medina for Umrah pilgrimage.

It also barred people from certain countries who were travelling to the kingdom on tourist visas.

Concerts and major sporting events have also been cancelled across the Middle East and North Africa.

Which country has been worst affected by coronavirus?

Iran has been by far the worst affected country. It has recorded the largest death toll from coronavirus outside of China, with 92 deaths and 2992 confirmed cases, although there are reports that the real figures are much larger.

Iran has a higher ratio of deaths to infections when compared to other countries, sparking fears that the number of infections in the country may be higher than current figures show.

Parliamentarians and government ministers have reportedly been infected by the coronavirus with a senior adviser to Supreme Leader Ali Khamenei dying from the illness.