An image taken from video file of protests that erupted in Jaffa on 1 April (screengrab)
By
Jack Dodson
in
Haifa, Israel

Protests broke out on the streets of Jaffa late on Wednesday after police attacked five young men and arrested four, leading to an even more aggressive response from Israeli officers in the predominantly Palestinian community.

The incident is one of a long line of police brutality cases against Palestinians in Jaffa, and one that occurred during increased tensions amid a nationwide lockdown to slow the spread of coronavirus.

Amir Badran, a Tel Aviv-Jaffa city council member and a lawyer, told Middle East Eye that the incident began when police stopped a teenager and asked for identification.

Due to Covid-19 regulations, residents more than 100 metres from their homes can be issued tickets for breaking quarantine.

Badran said the teenager was near his home when the police approached him, but didn't have identification. The incident escalated, and the police became unnecessarily violent and ultimately arrested several men, issuing all of them 5,000-shekel ($1,388) tickets.

A woman who tried to defend her sons was pushed to the ground during the interaction.

'This is not order'

Shortly after, videos from the incident circulated on social media, spurring people to protest against police brutality. Dozens of police responded with hoses, rubber-coated steel bullets and stun grenades. There were reports from residents of injuries.

"There was no violation and no crime done to make this situation deteriorate as it did," Badran said.

Badran said he went to the police station in Jaffa on Wednesday afternoon to ask the police what had happened. There has often been a disconnect, he said, between how leadership in the police station speaks with Palestinian residents and the treatment from patrol officers who are actually involved in these police brutality cases.

"I explained to [the chief of police] that there is a gap between what the police have to do for work and order," Badran said, arguing that the response to Jaffa's protest had been too severe. "This is not order," he said. 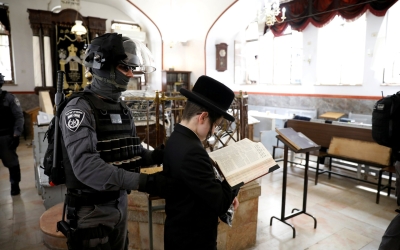 According to Badran, Israeli news and social media are now spreading "fake news", implying that the teenager was infected with the coronavirus disease and that’s why the police arrested him.

"In order to cover the brutality of the policeman, this is what's being spread as fake news," Badran said.

Abed Abu Shehadeh, another city council member from Jaffa, spent the afternoon with family members of those arrested. He said the arrests happened at about 2pm local time, and by 4pm residents were protesting on Jaffa's main street against police brutality.

Abu Shehadeh said he contacted police to ask them to release the five men from incarceration. That was the aim of the protests, he said, and he told police that the people would go home if the men were released.

Police brutality is a daily occurrence

Worldwide, activists are asking governments to release people from jail to prevent the spread of Covid-19.

"If there had been any crimes, they could investigate them two days, three days later," Abu Shehadeh said. "What they said was 'we won't be blackmailed'".

The protests were a result of the long-held impression that police use excessive force in dealing with Palestinian residents in Israel.

'When a police force sees you as an enemy, this is what you get'

On 22 March, two Palestinian men were attacked by police during an arrest and later required medical attention. The men told reporters the attack was unprovoked.

In 2017, protests also broke out after 22-year-old Palestinian Mahdi Sa'adi was killed by police. In that case, police fired at Sa'adi because he attempted to flee. Palestinians in Jaffa took to the streets to express their anger about the killing for days after.

"The youth in Jaffa have been suffering through police brutality on almost a daily basis," Abu Shehadeh said.

He said that most of the police officers serving in Jaffa had previously been in the Israeli army and were used to engaging with Palestinians in the occupied West Bank. "When a police force sees you as an enemy, this is what you get."

A police statement issued late Wednesday evening suggested that the protests had been an organised effort. Police said they had arrested four people and ticketed a teenager for violating the Covid-19 quarantine.