Coronavirus in Saudi Arabia: 'Most' of Mecca’s population may be infected Saudi authorities allowed for a limited number of worshipers to enter the Grand Mosque during Ramadan, 27 April 2020 (AFP)
By
MEE staff

Recent testing has indicated that the actual spread of coronavirus in Saudi Arabia may be significantly higher than the official estimates, medical sources have told Middle East Eye.

According to three senior Saudi medical sources, nearly 70 percent of Mecca's more than two million residents are estimated to be carriers of the virus, according to recent random testing conducted in the holy city.

Saudi Arabia has so far recorded 21,402 cases and 157 deaths from Covid-19. These are the highest numbers in the six-member Gulf Cooperation Council (GCC).

“The actual spread of the disease could be three to four times higher than the declared one,” one source told MEE on condition of anonymity. “Saudi health authorities expect the peak to be sometime in June.”

On 2 April, Saudi Arabia imposed a 24-hour curfew on the holy cities of Mecca and Medina as part of measures to contain the disease.

The curfew was relaxed on 26 April, following the start of the holy month of Ramadan, but restrictions on Mecca remained in force.

A countrywide lockdown has been in place in the kingdom since 25 March, including a ban on entry and exit from Mecca, Medina and Riyadh, as well as restriction of movement between its 13 provinces.

With Mecca under the strictest lockdown, it is widely believed the holy city is the epicentre of the outbreak in the kingdom. Hajj, the annual pilgrimage that sees millions of Muslims travel to Mecca, is due to begin in July but is widely expected to be cancelled or curtailed.

According to one medical source, other governorates might return to full lockdown if the number of cases there increases by 20 percent.

The source said that a new hospital with 500 beds had been established in the Red Sea city of Jeddah, along with two other facilities, to treat the increasing number of cases.

Middle East Eye has approached the Saudi authorities for comment, without response by the time of publication.

Responding to a report by the New York Times published on 8 April, the former diplomat denied that 150 royals had caught the virus, accusing the paper of spreading misinformation and saying the true number was less than 20.

The US paper reported that doctors at King Faisal Hospital in Riyadh, where members of the royal family are treated, are preparing as many as 500 beds for an expected surge in numbers of coronavirus patients from the ruling al-Saud family.

It also said that the hospital had a special wing for treating members of the royal family, particularly King Salman, 84, and his brothers.

The NYT added that any sick members of staff would now be treated at a less elite hospital to make room for the incoming royals.

Dozens of family members, including Prince Faisal bin Bandar bin Abdulaziz al-Saud, the governor of Riyadh, had been treated for Covid-19, according to the report.

Last month, MEE reported that the King Faisal Hospital had been temporarily closed after a staff member had tested positive for Covid-19.

“The truth is that only less than 20 members of the al-Saud family have been infected, and the hospital has not been allocated for them. The hospital treats all citizens and residents,” Prince Turki wrote for the Saudi newspaper Al-Sharq Al-Awsat. 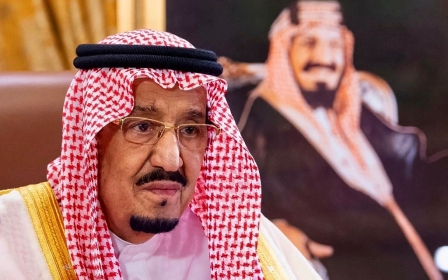