Ousted president's fellow inmate and former aide said to be suffering from Covid-19, with activists fearing prisoners could flee if released 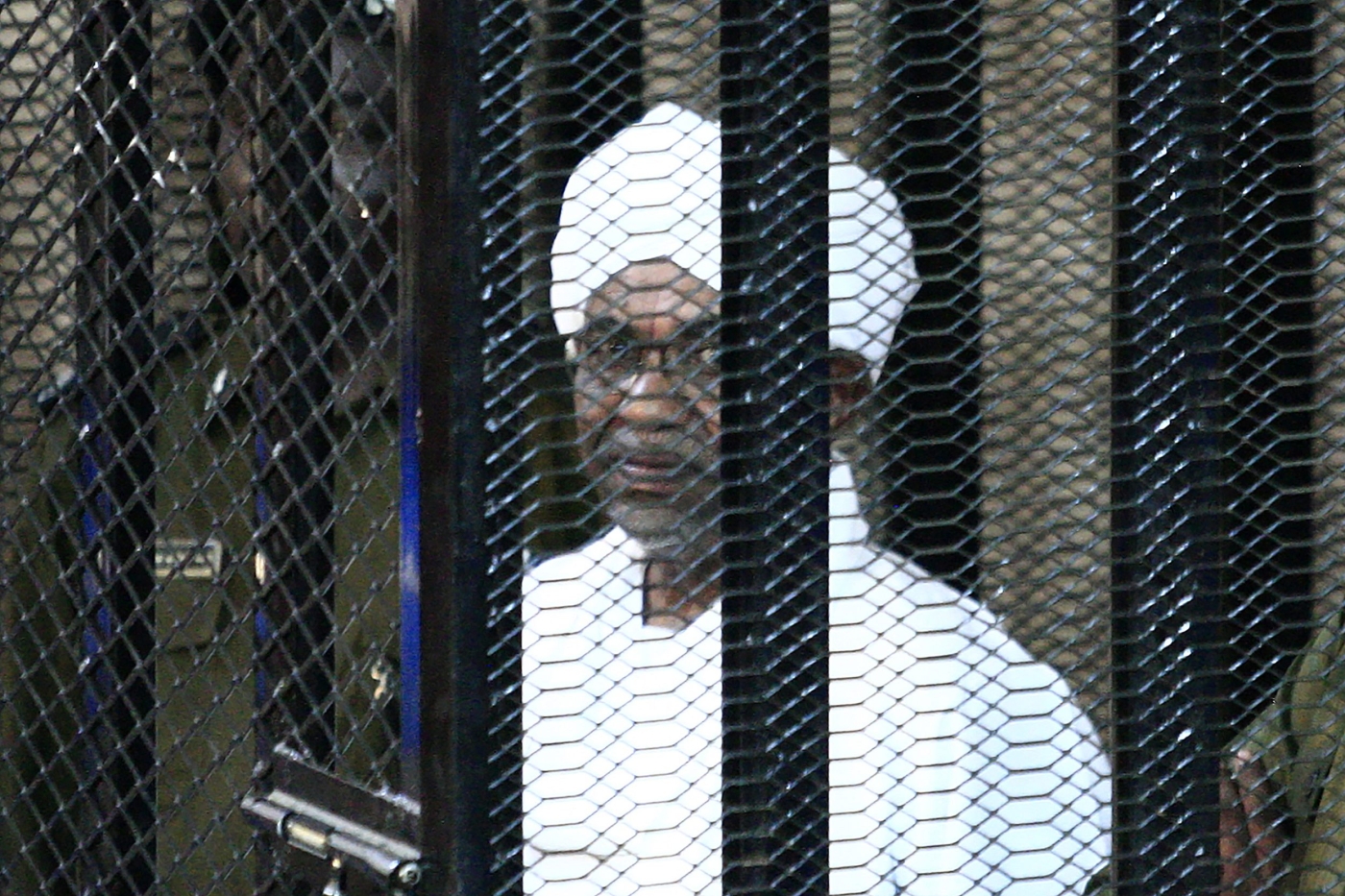 Bashir and the other detainees are accused of a range of crimes, including involvement in the country's 1989 military coup, the killing of protesters and corruption (AFP)
By
Mohammed Amin
in
Khartoum

Supporters of Omar al-Bashir are calling for the release of the ousted Sudanese president and other detainees after claims that the coronavirus is spreading in the prison they are being held in.

On Wednesday, dozens of the prisoners' families protested in front of the presidential palace in Khartoum, calling for the immediate release of the 23 officials of the former government being held in the capital's Kober prison.

The relatives chanted slogans against the transitional government, saying it held them responsible if any harm came to the detainees, and that they would continue a sit-in there until the prisoners were freed. The calls for the release of Bashir and the other prisoners has sparked controversy in Sudan, with pro-democracy protesters arguing the prisoners are accused of serious violations and should not be released without trial.

The detainees' families say Ahmed Haroun, an assistant to Bashir and chairman of the former ruling party, has been infected with the virus.

Sudan's ministry of health has yet to make a statement on the claims despite several attempts by MEE for comment.

Bashir's defence team has called for his and the other detainees' release, or for them to be placed under house arrest.

Activists agree the detainees have a right to medical treatment but that authorities need to act cautiously over fears some may attempt to escape, as has happened on other occasions.

Sudan has 318 confirmed cases of the coronavirus, with 25 deaths and 32 recovered.

Haroun was indicted by the International Criminal Court (ICC) for war crimes in Darfur and is also accused of other crimes in the troubled South Kordofan region.

Bashir and the other detainees are accused of a range of crimes, including involvement in the country's 1989 military coup, the killing of protesters and corruption.

'The others are at great risk'

A member of the committee representing the detainees' families told Middle East Eye that Haroun had tested positive for the coronavirus and that prison authorities had isolated him in the hospital attached to the jail.

The member, who asked to remain anonymous, said that the remaining 23 prisoners had been separated from each other to prevent the spread of the virus.

“We knew from Haroun’s family that his test has resulted positive after it was negative two previous times, but his health situation is not bad so far, and reports that he has been put on a ventilator are not true,” he said.

Mohamed al-Hassan al-Amin, the head of Bashir's and the other 23 detainees' defence team, also said Haroun had tested positive and warned that all the prisoners were now at risk.

“Haroun and the others are at great risk because all the detainees sat together inside the prison and last Friday were all saying prayers together," said al-Amin.

"Salih and Nafia were in one cell with Haroun inside the prison, so the situation is serious and the government has to deal quickly with this humanitarian case.”

'They will not be released'

Al-Amin said his team would be sending a petition to the general prosecutor calling for the release of the detainees.

“The Sudanese authorities are responsible right now for the safety of all the detainees, including Bashir, and we demand they are released with guarantees or are put under house arrest until they have recovered," he told MEE. "And they should be kept at a distance as there are suspected cases of corona right now.”

MEE contacted three officials from the Ministry of Health to confirm or deny the outbreak but received no response.

A source from the office of the general prosecutor told MEE that they had not so far received a petition from the defence team.

He also stressed that the detainees had a legal and humanitarian right to medical care if there were any suspicions of the coronavirus being transmitted in the prison.

However, the source told MEE, under the condition of anonymity because he was not authorised to talk to the media, that the release of the detainees was not an option for the prosecutor due to the seriousness of the charges against them.

“This office has nothing to do with this until we receive something from the lawyers, or the concerned ministries, about the situation," he said.

"But let me make clear that there are many options for providing medical treatment for those detainees if they record any suspected cases in the prison.

"We will see how to take care of them, but they will not be released.

“It’s not the right of this office to release them because they are under investigation for serious crimes against the Sudanese people and only the court can decide on their fate,” he added.

Social media users and activists in Sudan have appealed to the authorities not to release the 23 detainees.

Pro-democracy protesters, displaced persons in Darfur, and victims of the fighting there have all called for the detainees to be closely monitored as they fear they plan to flee the country.

“Haroun has already been tested five times and the results were negative, so I do believe that it’s an attempt by the former regime to conspire and let them escape,” said activist Ghazi Elarayah.

Osman Adam Khamis, the youth coordinator of the Abushok camp for internally displaced people in North Darfur state, told MEE over the phone that detainees must be tried in court.

“We call on the transitional government institutions to anticipate any conspiracy from these criminals. They may lie or flee or do any unexpected act, so we have to take care," he said.

"For sure they have the right to be treated but we have to take care as well.

“The question of justice in Sudan is one of the main causes and demands of this revolution, so we can not accept the release of these people under any circumstances,” he added.