Syria initiated a night curfew on Wednesday to combat the spread of the coronavirus, joining several countries in the region that have taken similar measures.

The curfew, which bans all trade activities and orders stores to shut from 6pm to 6am, came into effect on Wednesday evening, the country's official news agency SANA reported, publishing stories about deserted streets across Syria.

Earlier in the day, the health ministry in Damascus announced four more cases of coronavirus infections, bringing the toll to five.

Aid groups have raised alarms about a possible outbreak of the virus in the war-torn country, especially in the rebel-held Idlib province in northwest Syria, where violence has depleted health-care facilities and hundreds of thousands of displaced people live in crowded camps. "The situation in Idlib is dire, people are exhausted, hungry and afraid," the charity Islamic Relief said in a statement earlier in March.

"The health system has been shattered by the violence and mass displacement and it is already struggling to cope. We’re very concerned that if the coronavirus reaches Idlib this humanitarian catastrophe will only get worse."

On Tuesday, the World Health Organisation (WHO) said it was setting up to start testing for Covid-19 in Idlib within days.

The virus has been spreading across the Middle East and North Africa. In Iran alone, it has killed more than 2,000 people.

Several countries have adopted strict measures to combat it, with Tunisia, Sudan, Jordan, Saudi Arabia and now Syria, among others, imposing nightly curfews.

UN envoy for Syria Geir Pedersen called on Tuesday for an "immediate nationwide ceasefire" and a "large-scale release of detainees" in Syria to combat the coronavirus.

"Our common humanity demands that we act now so that the Syrian people are spared further fighting and that we combat this new threat to Syrians and to our world," Pedersen said in a statement.

"Let's end the violence, work together to combat Covid-19 in Syria, and work to move ahead on a political way out of the crisis in Syria." Covid-19
What displaced Syrians make of the coronavirus pandemic 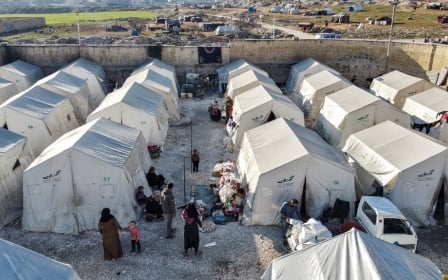