Tunisian President Kais Saied is granting a special pardon to 1,420 inmates in order to reduce the country's prison population amid the spread of the coronavirus, official news agency TAP reported.

In his decree on Tuesday, Saied also called for disinfecting prisons and supporting medical units fighting the pandemic.

The pardon comes two weeks after Tunisia released more than 1,800 prisoners on its independence day. The country had also released 2,400 inmates in January, coinciding with the anniversary of the 2011 uprising that toppled President Zine El Abidine Ben Ali.

Tunis has imposed strict measures to fight the spread of Covid-19, including a 12-hour nightly curfew and deploying remote-controlled police vehicles to urge people to stay home.

The European Union pledged $280m to Tunisia late last week to help the North African country combat the novel virus. Tunis had allocated $850m to counter the economic and social effects of the crisis.

Still, on Tuesday several hundred Tunisians in a working-class district of the country's capital took to the street, demanding government support and protesting the mandatory lockdown that has left so many without work. The government has promised direct stimulus aid, with checks expected to be delivered to those affected by 6 April.

Tunisia has suffered eight deaths and more than 300 confirmed cases of Covid-19. Saied granted the new pardon on Tuesday as rights groups called on other countries in the region to release political prisoners and detained journalists.

Earlier this month, several human rights groups urged Egyptian authorities to free detainees temporarily as an urgent measure to prevent an outbreak of Covid-19 in the country's overcrowded jails.

But the Egyptian government, which has detained more than 60,000 dissidents, has so far resisted those calls, and on 18 March, it jailed four activists advocating for prisoners' release.

Turkey, where fatalities from the virus have risen to more than 200 by Tuesday, introduced a law that would free up to 100,000 prisoners.

But on Monday, more than two dozen rights organisations called on Ankara to immediately release all jailed journalists and political prisoners as well as inmates in pre-trial detention. 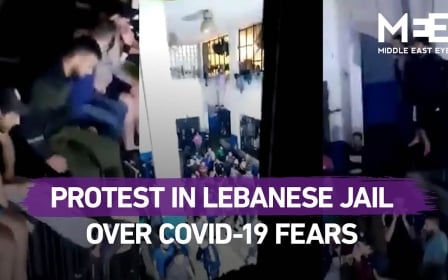