Decision comes as country's death toll reaches 92 with number of infection increasing to 5,698 Turkey cancelled all international flights and imposed a travel ban on 30 cities, including Istanbul, Ankara and Izmir, in an effort to contain the spread of the coronavirus.

"We have entered a new period where we need to make more sacrifices," Turkish President Recep Tayyip Erdogan said in a special address to the nation on Friday. "We won't fall into inaction nor panic."

Travel between the 30 cities will be possible only with formal permission from local governors, Erdogan said.

The president also said that the private sector has been ordered to minimise its staff in workplaces and transition into flexible working shifts. 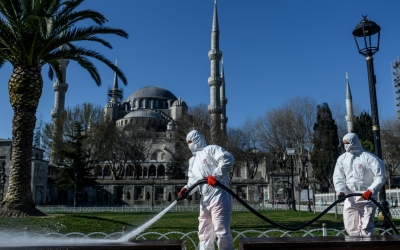 The Turkish government has also closed down parks, forests and shores on weekends and won’t allow gatherings on weekdays in these areas.

"In all provinces, a pandemic board will be established, with governors as their chairs, to monitor precautions and take additional precautions, limited to the relevant province, if necessary," he said. "We can get out of this problem faster if we properly apply these measures."

The additional measures were put in place on Friday as more patients piled up in the last 24 hours.

On Friday, Turkey announced 16 new deaths from the disease, bringing the total to 92. Turkish Health Minister Fahrettin Koca said the total number of confirmed infections had reached 5,698, after 7,533 tests were conducted earlier in the day.

He also said that a special science board advised Erdogan to further increase the measures by putting cities in isolation after the number of patients increased by 50 percent in a single day.

Turkish authorities have ordered those aged 65 and over and those with chronic illnesses to stay home, while most public spaces have been temporarily closed. 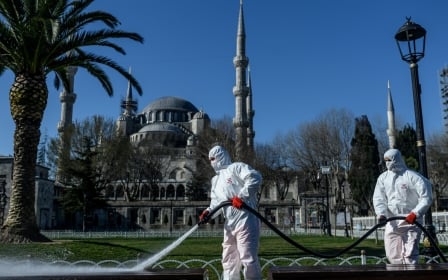