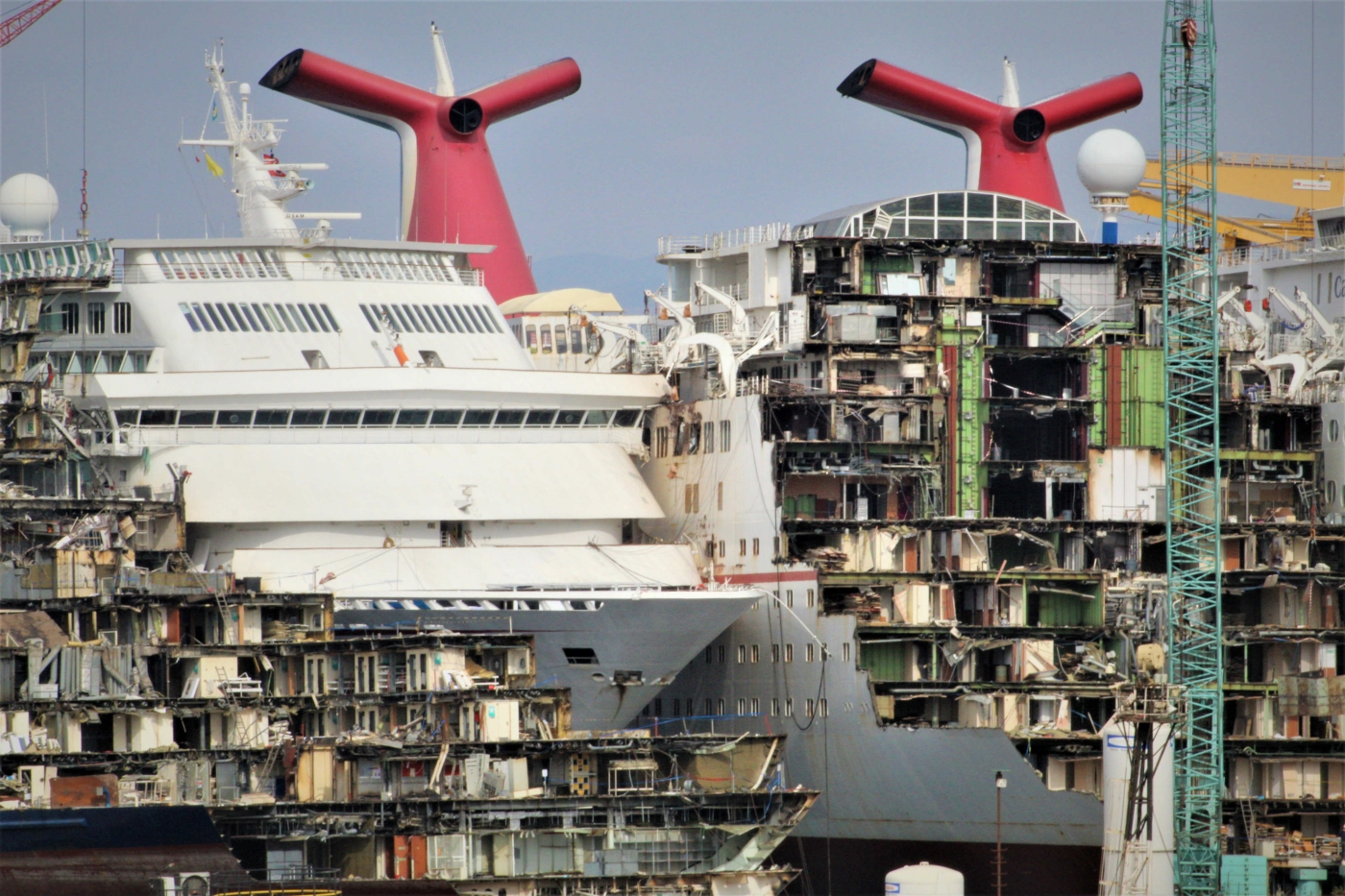 The giant ships are given up for sale for their metal to be used as industrial steel (MEE/Nimet Kirac)
By
Nimet Kirac
in
Aliaga, Turkey

Providing a startling sight, colossal cruise ships are lined up in a scrapyard in the western Turkish town of Aliaga. Having already made their final voyages, they now await dismantlement.

Each one, once comprising billions of dollars' worth of luxury floating entertainment, has been retired early as a result of the coronavirus pandemic, their parts to be sold off to the highest bidder.

Since the pandemic crushed the cruise sector globally, some of the biggest companies in the industry, such as the US-based travel entertainment giant Carnival Cruise Lines, have filed billions of dollars in losses, posing concerns for the future of such a crowded and environmentally threatening business.

'If it wasn't for the pandemic, they would still have 15 more years to go'

In March, the United States government ordered a no-sail rule for all cruise ships. That measure ended on 31 October, but as a second wave of the virus sweeps the northern hemisphere stringent conditions have been put in place for those ships that intend to renew operations.

The virus has put the scrapyard of Aliaga, on the Aegean Sea, an hour's drive north from Izmir, under the spotlight.

"Five are here, three are on the way," he said.

The vessels arrived in Aliaga from Britain, Italy and the United States, under the flags of Italy, Panama, the Bahamas and Malta, said Onal, adding that a cruise ship usually takes six months to dismantle.

The giant ships, coming in at as much as 70,000 gross tonnage each, were given up for sale for their metal, to be used in the construction industry, Onal explained.

Their wood, cutlery, rugs, chairs and other articles that were in useable condition were bought mostly by hotels, cafes, collectors and designers from around Turkey, he said.

'This is a record year for Aliaga'

Onal's office overlooks the vast breaking yard, with a direct view of the car and cargo ship dismantling area.

It is decorated with naval travel pieces, including a heavy, watertight metal door, wooden ship maquettes, licence plates from around the world and a retro Volkswagen table clock.

"Even this rug is from a ship. This desk, the chair you and I are sitting on. Everything you see," he said.

The 48-year-old businessman is also the chief executive of OGE Ship Dismantling, a family company founded by his father in 1974.

"This has always been our job," said Onal, mentioning his older brother Ismail in the conversation.

"We grew up seeing ships get disintegrated," he said, noting that these vessels were retired prematurely due to Covid-19.

'When we broke the Russian army ships in the 1990s, those were the best times. We made the best money then'

"If it wasn't for the pandemic, they would still have 15 more years to go."

Sounding pleased with the recent international media attention his workspace has attracted, he added: "While the pandemic unfortunately impacted a large number of industries, truth is, this is a record year for Aliaga."

He said Turkey is Europe's leader, and the third in the world, in the ship recycling business.

The last time Aliaga saw such a rush as this was during the 2008 global financial crisis, Onal said.

When the shipbreaking business in the city's eclectic Balat district began to expand, and the breakers needed more space, a 24-year-old Osman Onal, Kamil's father, along with his friends, decided to look for new land with wider possibilities.

Osman Onal, now 83, said that when he arrived in Aliaga it was just an empty bay. Now, some 2,000 workers from the region and across Turkey work in the very loud and busy industrial yard.

Each private company, 22 in total, rents dock space from Turkey's state housing authority. Before the pandemic, the scrapping firms mostly dealt with cargo and container ships, the founding father said.

Osman Onal's office is on the floor above his son's, and has an even wider view of the scrapyard. There is an old gramophone by his wide desk, at least 10 binnacles (the housing for a compass) in a corner, and photos of himself and his sons, as well as a portrait of a younger President Recep Tayyip Erdogan behind his chair.

He said that he had no idea things would come this far when he first arrived here as a young shipbreaker.

"It was different back then, and it was better because it was simple. Today, the dollar and the market are fluid; it's risky," the businessman said.

Kamil Onal intervenes to say that this was not a political answer on his father's part: "He's just telling what the market situation is."

"When we broke the Russian army ships in the 1990s, those were the best times. We made the best money then," added his father.

Aliaga sees a variety of vessels for scrapping, a process often completed in just a few months.

Kamil Onal recalled that only one company, Leyal Recycling, which had bought the pre-scrapped vessels from the British government, was able to perform the scrapping of the retired carriers.

"That wasn't easy to figure out," he said. "Warships have their own procedures to break and rules to follow."

Whether ships are made for war or pleasure, Aliaga is where many come to die, cut up by the metre, the parts loaded onto trucks and transported to be recycled as industrial steel, including for subsidiary shipbuilding.

'If these items could speak, they would each tell their stories from around the world through the decades'

Upon purchase, Turkish companies promise the shipowners that their vessels will be used only for scrapping, Kamil Onal said, responding to a question as to whether they could in theory use the ships in a different capacity.

Environmental concerns are also present due to often hazardous inventory.

In 2015, an oil-refining ship named Kuito, due to be scrapped at the yard, caused controversy over concerns that it could be radioactive.

Calls from environmentalists not to go ahead with the scrapping were ignored, while the Turkish Atomic Energy Authority eventually reported that the vessel was non-radioactive.

Kamil Onal said each scrapping requires their business to submit an EU emissions report "every step of the way".

The family company was also fully compliant with the international Hong Kong (2009) Convention for the Safe and Environmentally Sound Recycling of Ships, he said.

'Almost anything can be recycled'

On the side of the road heading to the scrapyard is an antique shop owned by Selim Afacan. Afacan, who described himself as a lover of the sea, said the shop was a legacy from his father.

His office is a disintegrating, red-coated, two-floored house on wheels.

"If these items could speak, they would each tell their stories from around the world through the decades," he told MEE, while pointing out items such as small portraits of Mary and Jesus.

"The telephone is from a Russian shipbreak," he said, pointing to a metre-long heavy metal phonebooth he is selling for 900 liras ($120).

"New ships have joysticks, not these classic steering wheels or binnacles. It makes me sentimental," he said.

For those wanting the classical decor or scrap, interested buyers submit bids when a vessel arrives at the port, said Afacan.

"It's like an auction. You take an offer to the [dismantling] company's office,” he said.

Lifeboats are too expensive this year, he noted, adding that normally he bought several, but not this time.

"Even these lifeboats can be used in shipmaking. If you cut the bottom part, you can use it," he said. "Almost anything coming out of those ships can be recycled."

As the skeletons of cruisers lie rusting in the Turkish scrapyard, the industry they once served faces a bleak future.

In July, Carnival Cruise Lines announced it had already reduced its fleet by 12 percent, by selling 18 "less efficient ships". Among those sold to be scrapped are the 261m-long, 70,367 gross tonnage Carnival Fantasy.

Turkey, usually a popular cruise destination with its Aegean and Mediterranean coasts, may receive further liners, but this time without passengers, welcomed for demolition purposes, and by antique dealers.