Sceptical that a Covid-19 outbreak has indeed emerged, residents in the port city are living life as normal - much to the horror of health officials Aden is unlike other coronavirus-hit cities. Its markets are still teeming, mosques full of devotees, and streets and restaurants crowded with people.

Other than extra precautions being taken at hospitals, there is little evidence that the port city has witnessed a disturbing spike in Covid-19 cases. Nor, in fact, that it is currently the centre of a power struggle between the government and southern secessionists.

The two are closely linked, however.

On Wednesday the health ministry and the World Health Organisation (WHO) announced five coronavirus cases, including two deaths, in Aden, announcing a three-day curfew in response.

For many in the city, the curfew seemed to come at a strategic time for the government. Suspicious of the motives behind it, Yemenis roundly ignored the curfew order. Meanwhile, two more cases have been recorded in Aden, with the countrywide total rising to 12.

Yemen is no stranger to disease, with a healthcare system shattered by five years of war and millions chronically malnourished and reliant on food aid. Cholera and dengue fever, among other maladies, take lives every day.

In Aden, recently the victim of deadly and destructive floods, Yemenis have been suffering from fevers for weeks. Most are suspected to be cases of chikungunya, a deadly disease spread through mosquitoes that have thrived since the flooding.

'We have been witnessing people die and suffer from different kinds of fever for more than a month in Aden, but the government has not taken any action'

“We have been witnessing people die and suffer from different kinds of fever for more than a month in Aden, but the government has not taken any action,” Mazen Wesam, a 34-year-old driver in Aden, told Middle East Eye.

The coronavirus outbreak emerged from a neighbourhood that has suffered several chikungunya cases, and authorities’ identification of Covid-19 there so soon after the STC broke from the government has raised suspicions.

“The health ministry is trying to politicise Covid-19 and this is a big problem, as people have lost trust in the ministry,” Wesam said, adding that he is no fan of the STC either.

“If there are Covid-19 cases in Aden, the health ministry should explain to people how the disease arrived to Yemen while all ports are closed,” Wesam said.

“I continue to live life normally and all people in Aden do the same, as they trust neither the government nor the WHO, as both are working to pressure the STC to withdraw its latest step.”

Middle East Eye has approached the WHO for comment. The STC, meanwhile, told MEE it works closely with the health ministry and there is no conflict between them.

Yemen is uniquely badly placed to deal with coronavirus.

The WHO has warned that the virus is almost certainly actively circulating around the country undetected, predicting that over half of Yemen’s 30 million people could contract Covid-19 unless drastic measures are quickly taken.

Since Yemen’s first Covid-19 patient was diagnosed on 10 April in Hadhramout province’s Al-Shihr, health authorities have scrambled to boost testing capabilities and find extra beds to cope with a surge in patients. Local initiatives have been recommended too.

“Even in resource-poor settings, collective action integrating the full commitment of government, community groups and the private sector can effectively mitigate the impact of the pandemic,” the WHO urged over the weekend.

The apparent gap between the first case in Hadhramout and the next cases last week both confused Yemenis and stoked suspicion.

'We could not help the patients of cholera and dengue fever, and we definitely cannot fight Covid-19'

Ahmed al-Wazir, a 43-year-old public employee in Aden’s trading office, is sceptical that coronavirus has reached his country.

“On 10 April, the WHO confirmed there is a case in Hadhramout and later it announced the patient recovered. No other case was reported in the whole province,” he told MEE.

In the wake of Yemen’s patient zero, Hadhramout imposed a partial curfew and other provinces closed their borders. No other cases were recorded until Monday, when another two in the port city of Mukalla were discovered. But trust in the government’s capabilities is slim.

“I’m not stupid enough to believe that Hadi’s government controlled the disease in Hadhramout, and anyone can understand that the case there was not Covid-19,” Wazir said.

“The health ministry announced the case in Hadhramout to draw the attention of southern people and distract them from their goal of independence. Now they announce five cases in Aden after the STC’s self-management declaration.”

A supporter of southern self-rule, Wazir hopes the STC will form a new administration in Aden as soon as possible.

“I need a government that respects my mind and does not use Covid-19 and other health and humanitarian issues in political disputes.”

There were criticisms from the moment the government’s Supreme National Emergency Committee for Coronavirus announced the new cases last week.

Commentators quickly noted that the officials telling Yemenis to take precautionary members were not doing so themselves, seated close beside one another at the news conference.

Meanwhile in Aden, five hospitals shut their doors to people looking for treatment, and doctors fled other medical centres that stayed open, abandoning patients suffering from other diseases.

'There are patients suffering and dying from chikungunya, malaria and other fevers, and that makes people mix up Covid-19 and other diseases'

Jamal Abdulnasser took his father to a hospital for surgery on his kidney on Wednesday. Having performed the surgery, the doctors disappeared.

“The doctors did the surgery at noon and my father lay in the ward as he still needed care. But on Wednesday evening all the doctors fled the hospital and left patients alone,” Abdulnasser told MEE.

“It was a disaster and my father would have died if not for some nurses who remained in the hospital to help.”

The hospital now admits only patients who are in dire need of treatment, he said.

Speaking on condition of anonymity, a source in Aden’s health office told MEE that Yemen’s healthcare system is unable to deal with a widespread Covid-19 outbreak.

“The healthcare system has been collapsing since 2015. We could not help the patients of cholera and dengue fever, and we definitely cannot fight Covid-19,” he said.

“That’s why we have been calling on people to take precautionary measures into consideration and try to stay at home.”

The source confirmed that all five cases in Aden are Covid-19.

“There are patients suffering and dying from chikungunya, malaria and other fevers, and that makes people mix up Covid-19 and other diseases,” he said.

As for accusations the health ministry is undermining the STC, the 15-year Aden healthcare veteran underlined that his office works under the supervision of both authorities.

“To those who say the health ministry is politicising Covid-19, I want to confirm that the STC is involved in all decisions so please stop this accusation and try to take care of yourselves and your families.”

With additional reporting from Aden. 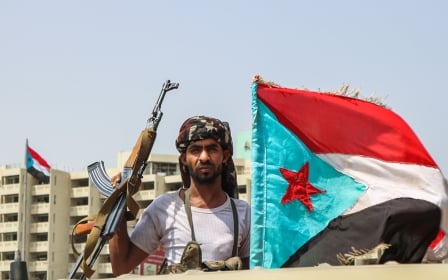