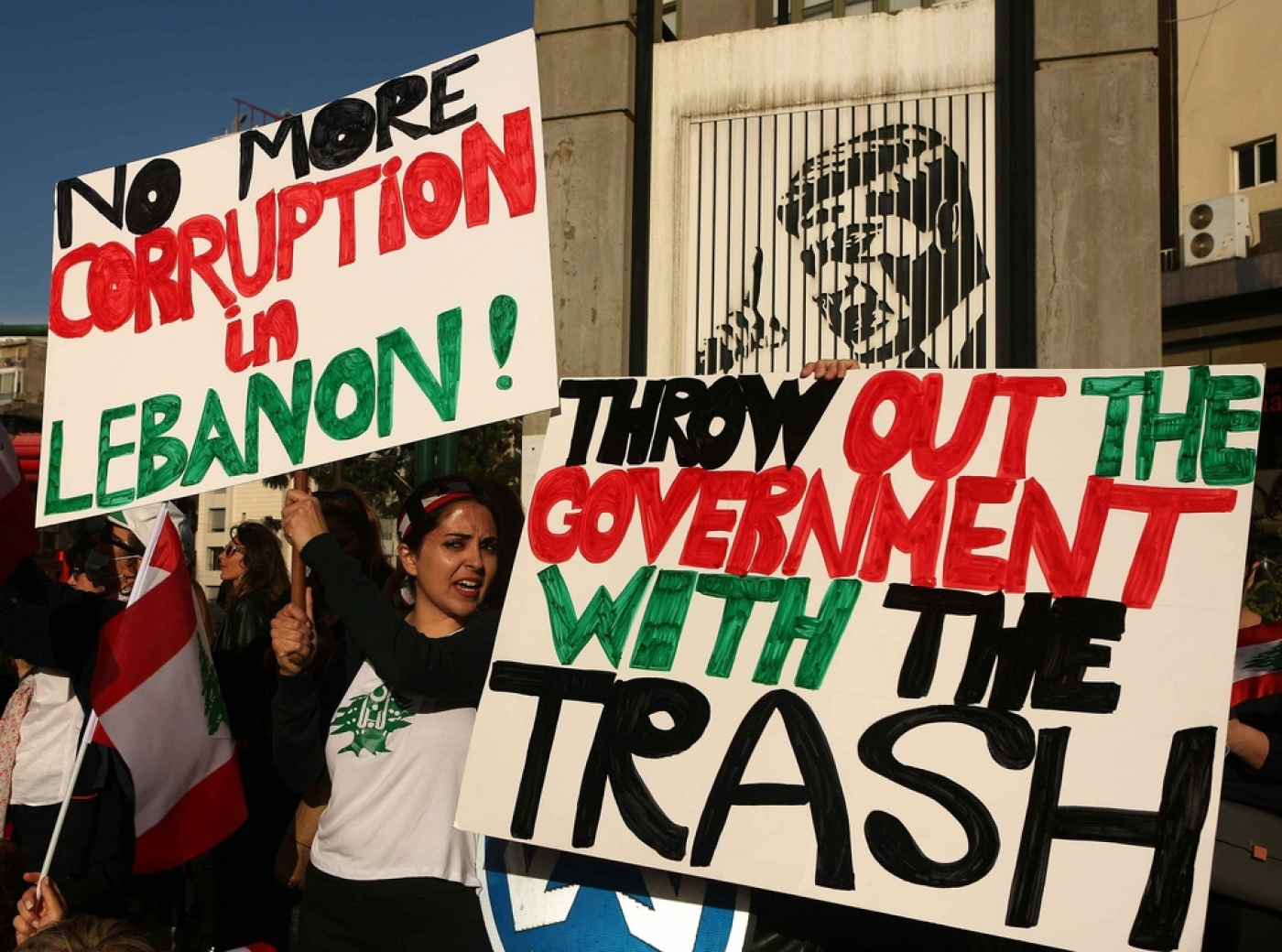 Lebanese women wave their national flag and hold placards as they take part in a protest in Beirut (AFP)
By
MEE and agencies
Ordinary people feel that corruption has worsened in nine Arab countries and territories over the last year, especially crisis-hit Lebanon and war-torn Yemen, a study by corruption watchdog Transparency International said on Tuesday.
Its survey of nearly 11,000 respondents showed that sleaze was also seen to be on the rise in Algeria, Egypt, Jordan, Morocco, the Palestinian Territories, Sudan and Tunisia.
Across the countries surveyed, 61 percent of respondents thought corruption had worsened in the past year.
"Public dissatisfaction with corrupt leaders and regimes has been a key catalyst for change in the Middle East and North Africa, notably with the Arab Spring protests," said the Berlin-based group.
"Yet despite half a decade having passed since many of these protests first took place, our Global Corruption Barometer still finds widespread public dissatisfaction with government efforts to curb public sector graft."
Transparency added that "the majority of people in the region perceive corruption to have risen recently (61 percent), and many think that government officials and members of parliament are highly corrupt."
The share of the population who saw worsening corruption stood at 92 percent in crisis-hit Lebanon, 84 percent in Yemen and 75 percent in Jordan, against 28 percent in Egypt and 26 percent in Algeria.
Among the people interviewed, 77 percent in Yemen and half of Egyptians said they had paid a bribe to obtain a public service, against nine percent of Tunisians and four percent of Jordanians.
Report author Coralie Pring said the group was "particularly worried" about Lebanon, a country that has been without a president since May 2014, amid deep political divisions.
"Across a number of different questions the public were very, very critical not only of government efforts in fighting corruption but also of a perceived high level of corruption across the public sector," said Pring.
A note of hope came from Tunisia, a rare Arab Spring nation not to have tipped into chaos or dictatorship.
"Tunisia had actually very positive results coming out of the survey," said Pring. "Many people feel that they can make a difference in the fight against corruption.
"Unfortunately even in Tunisia, despite the Arab Spring, still the majority of people were saying that their government is doing badly at fighting corruption."