Muslim worshippers perform the evening prayer during Ramadan in the Grand Mosque complex in Mecca, on 13 April 2021 (AFP)
By
MEE and agencies

Saudi Arabia is due to allow Muslim worshippers from abroad to perform the Umrah pilgrimage from 9 August, after 18 months of restrictions linked to Covid-19 safety measures.

The government will gradually accept Umrah requests from other countries to visit and pray in the Grand Mosque in Mecca and the Prophet’s Mosque in Medina, with a capacity of up to 60,000 worshippers, according to the official Saudi Press Agency. 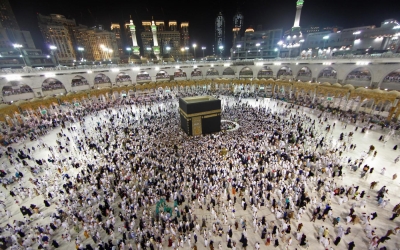 "The Ministry of Hajj and Umrah has worked in coordination with other concerned authorities prior to the start of the Umrah season 2021/2022 to develop executive mechanisms and create a safe and accessible environment for the Umrah performers throughout their journey to achieve security, safety and human health," the SPA said citing the deputy minister of Hajj and Umrah, Abdulfattah bin Sulaiman Mashat.

Mashat also said that his ministry will periodically determine the countries from which Umrah visitors will come and their numbers.

He added that being vaccinated is a prerequisite for performing the Umrah, praying in the Grand Mosque or visiting the Prophet's Mosque.

Foreign visitors will be required to show a valid vaccination certificate as part of their Umrah application, and visitors will be subject to quarantine measures imposed by the Kingdom on arrivals from specific countries.

Saudi Arabia has recorded nearly 532,000 coronavirus cases and more than 8,300 deaths as of 8 August. The Gulf Kingdom has administered at least 29,322,286 doses of Covid-19 vaccines so far, enough for two jabs for 42.8 percent of the population, according to a Reuters tracker.

Umrah is the name given to a pilgrimage to Mecca that can be undertaken throughout the year and is a shorter version of the annual Hajj gathering.

Both pilgrimages have been severely disrupted by the pandemic.

Umrah was suspended after the coronavirus outbreak last year but was later allowed in October for vaccinated residents and citizens. The Hajj, which normally draws millions of worshippers, was also restricted to a limited number of domestic visitors in July this year and last year. Inside Saudi
Pilgrims arrive in Mecca for second pandemic Hajj