Classes were about to break up for lunch when two bombs struck nearby Al-Ra'ai School, leaving death and destruction in its wake 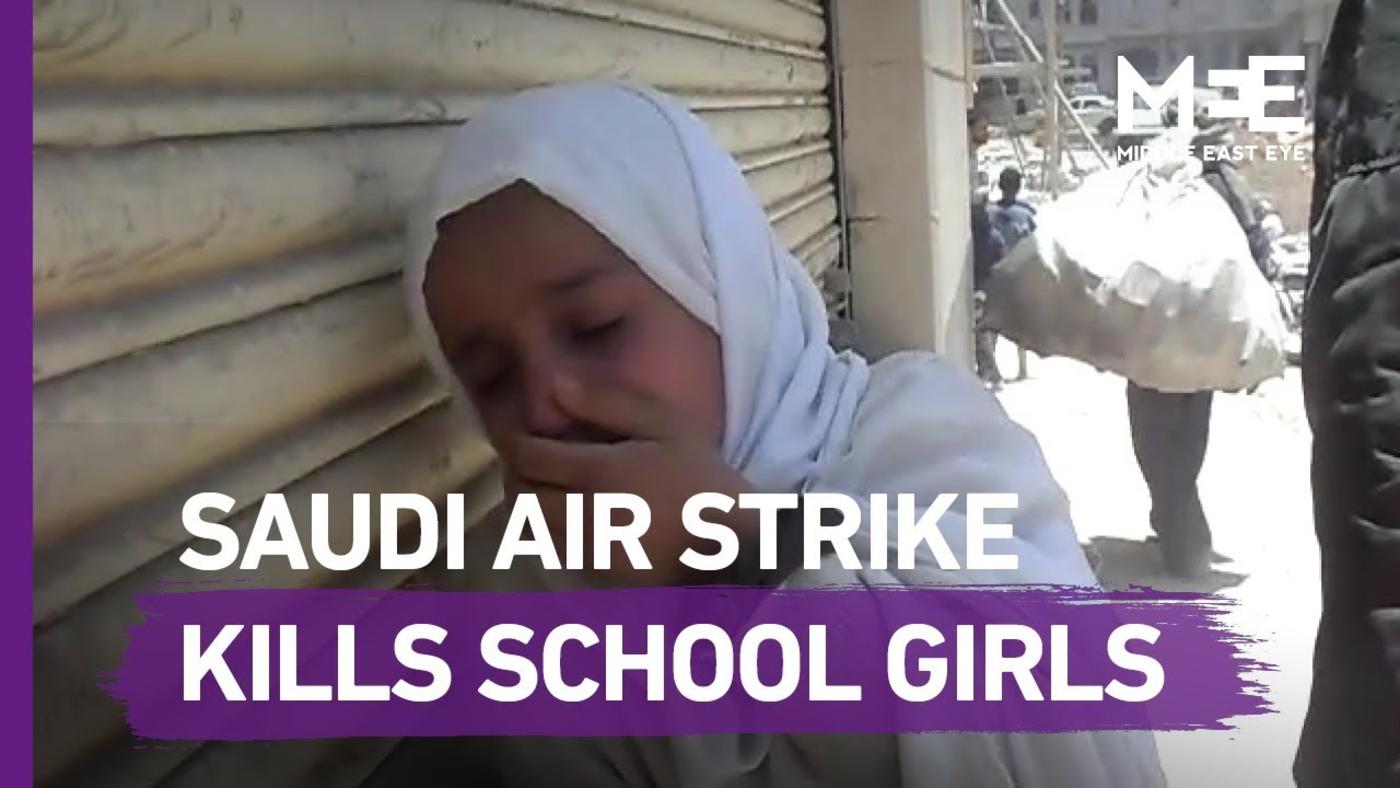 Samia* has been crying since noon on Sunday when alleged Saudi-led coalition air strikes killed five of her classmates at the Al-Ra’ai School in Sanaa’s Sawan neighbourhood.

Samia, 12, was studying when two bombs targeted the residential area where she lives. She told MEE that she was terrified as she watched friends die and others sustain serious injuries, with sections of the building falling around her.

I saw people bring dead and injured students, and I was trying to recognise if my daughter was one of them

- Father of 12-year-old injured in bombings

Eleven civilians, including the students, were killed in the bombings, according to UN officials in Yemen.

The Saudi-led coalition did not claim immediate responsibility for the bombing, but the Saudi-owned Al-Arabiya TV channel said on Sunday that Saudi-led air strikes had targeted a military camp near to residential area. The only air strikes in Sawan on Sunday were those which hit near the school.

A day after the attack, residents in Sawan said they couldn’t believe what had happened. There was damage to several buildings, including the school which was closed, yet life continued as normal in nearby markets and streets.

Many of the relatives of the victims were reluctant to speak to the media, especially on record, fearing that they could become an enemy of either the Houthis or the Saudi-led coalition, either now or sometime in the future.

But life has not been the same from Samia and her family. Samia’s father Saeed* told MEE: “I was in my house when the first bombing happened and I saw the smoke of the bombing near to the school.”

Saeed set off for the school in an instant.

“Immediately, I thought about my daughter and I ran towards the school. The next bombing happened while I was on my way. I couldn’t get to the school easily because there were many people going to look for their children,” he said.

The scene was hectic. Children were crying, ambulance sirens wailed. Finally, Saeed saw Samia. “Someone was trying to calm her and her classmates, but she was shouting,” he said.

Saeed said he was relieved that his daughter was safe, and Samia said she felt in safe hands once her father found her. But when they got home, she started to replay the moment of the bombing over and over in her head.

“My daughter is crying most of the time and she cannot sleep well. She saw the dead bodies of her classmates and she saw blood on the ground, so she is talking about this all the time,” Saeed said.

“Those who died and were injured are not the only victims of bombing. There are many children suffering psychological trauma because of the bombing and my daughter is one of them.”

Ibrahim, an owner of a house partially damaged in the attack, said his 10-year-old granddaughter, Ishraq*, was studying at Al-Ra’ai School when the bombs hit and was injured by spraying shrapnel. She was not injured critically and was far luckier than her classmates, he said.

“Some children were killed and others injured,” he told MEE. “The blood of the children is enough to send a message to the Saudis to stop the war.

Ibrahim said there is no one to compensate the owners of damaged houses or provide long-term care for injured people after air strikes like the one on Sunday.

“Civilians are the main victims of this war as there is no one to treat injured people or compensate the owners of houses,” he said.

“May Allah take revenge on the killers and save Yemenis in their country.”

Psychologist Sayun Fadhel, who works as a consultant in Sanaa, told MEE that the sound of bombing alone could be enough to cause long-term post-traumatic stress for the children who lived through the attack.

“The sounds is enough to leave psychological trauma on children, and when the child sees blood and dead bodies of his or her classmates that is a disaster,” Fadhel said.

“If the child does not receive the proper care and psychological aid now, he may suffer the effects of the trauma in future and this is the situation of children in Yemen.”

But many of the parents of the children involved in Sunday’s attack are unaware of the long-lasting trauma it may cause and won’t have the money to pay for treatment, which usually, to start, would entail seeing a psychologist.

“We hardly pay for food,” said Saeed, Samia’s father. More than anything, he said, he wants peace and his daughter’s recovery.

“I was thinking about the study of my children and their future but now I only want to see my daughter as before. It is difficult to see her crying all the time.”

*Pseudonyms have been used to protect identities.