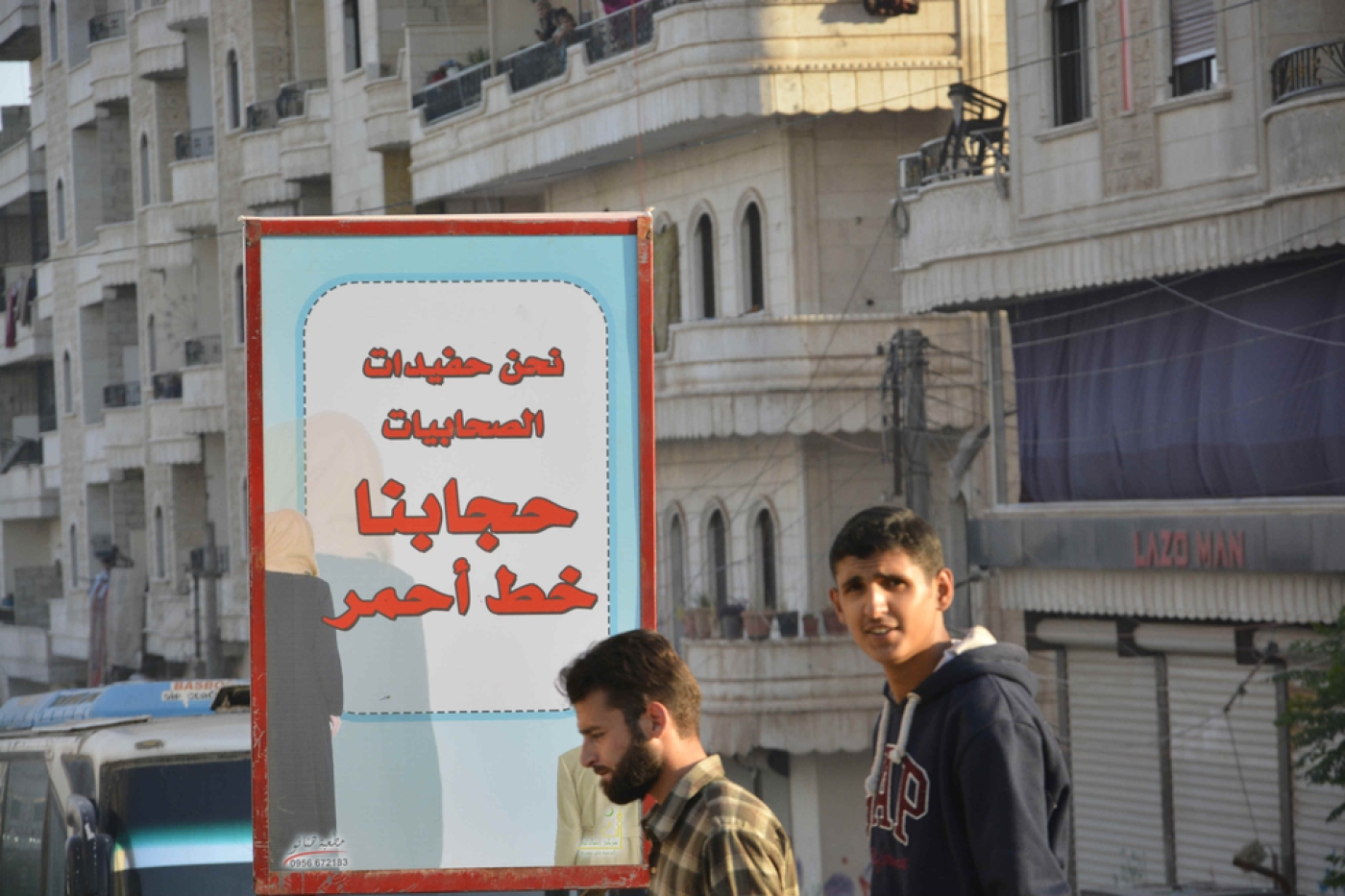 A sign in Syria's Afrin encourages women to take the veil. Translation: 'We are the Prophet's descendants. Our headscarf is a red line' (MEE/Harun al-Aswad)
By
Harun al-Aswad

AFRIN, Syria - Earlier this year, the tree-lined streets of Afrin in northern Syria witnessed ferocious battles and a weeks-long offensive.

Today, three months after hostilities ended, they are subject to a new conflict – one based on morals, religion and women's dress.

Across the city, posters have been erected instructing women to take the Islamic veil and wear modest clothing, a shock for many residents for whom such religious conservatism is a departure from Afrin's more secular tradition.

"I have seen signs in the main streets and sidestreets calling on women to take the veil and wear loose clothing. It is disagreeable for us in Afrin," Elizabeth, a Kurdish resident of Afrin, tells Middle East Eye.

Elizabeth runs a cosmetics shop in the city, which for much of the Syrian war felt relative security under the control of the Kurdish People’s Protection Units (YPG).

This all changed in January, when the Turkish military and some 25,000 allied Free Syrian Army rebels began a two-month operation known as "Operation Olive Branch" to take the city.

In the months since Afrin fell under Turkish and FSA control, some of the city's previous stability has begun to return.

"My work here is getting better, and my customers are increasing in number," Elizabeth says.

Yet in swapping secular-minded Kurdish rule for that of more conservative FSA groups, Afrin is experiencing a clash of cultures, one that has spilled visibly into the streets.

'My daughter says she’s afraid to go out, because she wears whatever clothes she likes and does not want to wear the veil'

"My daughter is 16, but it is hard for her to leave the house. I need her to help me with my work in the store," Elizabeth says.

"My daughter says she's afraid to go out because she wears whatever clothes she likes and does not want to wear the veil. She is afraid of being criticized."

The posters address women directly, calling them the granddaughters of the Prophet Mohammed's companions.

They tell Afrin's women that the veil is a "red line," and that they should wear loose clothing and avoid those that are translucent or figure-hugging.

"Choose your appearance freely but without disobedience," some banners read.

Choose your appearance freely but without disobedience

The initiative belongs to Ahrar al-Sharqiya, an FSA rebel group that has gained prominence in the northern Aleppo countryside and helped Turkey take Afrin from the YPG.

Ahrar al-Sharqiya, formed in early 2016, is a collection of various brigades, mostly from the eastern Deir Ezzor province, opposing the Syrian government.

In August of the same year, the rebel group joined Turkey in its first operation in northern Syria, known as "Euphrates Shield," which targeted Islamic State (IS) group fighters and the YPG along the Turkish border.

Ankara considers the YPG to be the Syrian branch of the Kurdistan Workers’ Party (PKK), whose militants have been waging a decades-long insurgency in Turkey's south.

The Turkish-led assault on Afrin is estimated to have displaced at least 137,000 civilians, according to the United Nations.

Weeks after the operation concluded in March, the Syrian government's own offensive on the rebel-held Eastern Ghouta suburbs in the Damascus countryside sent a separate wave of displacement towards Syria's north.

Many of those displaced from Ghouta settled in Afrin, where rebels have reportedly offered newcomers the houses of Kurdish residents that fled the city during Operation Olive Branch.

The wave of displacement from Ghouta has only exacerbated the social juxtaposition Afrin witnesses today.

Most of Afrin's residents are Muslims, but there are followers of other faiths too, such as Yazidis and Christians.

Under Kurdish rule, the communities largely existed beside one another peacefully, despite Syria's war taking an increasingly sectarian complexion over the seven years it has raged.

During this period, women in Afrin also found increasing prominence, rights and respect. They began to see greater participation in politics, civil society and services, with some even serving in the city's Asayish police force.

Last year, Kurdish authorities introduced a law promoting "equality between men and women in all aspects of social and political life".

It sought to prevent polygamy, dowries, unilateral divorce and honour killings, and allowed women to occupy all political positions.

Afrin has multiple religions but also there is no respect for the rituals of religion - and people here believe that not wearing veil is normal!

"The city of Afrin looks very different to the countryside of Damascus," Mohammed Bassam, one of those displaced from Ghouta, tells MEE.

"Afrin has multiple religions but also there is no respect for the rituals of religion - and people here believe that not wearing veil is normal!"

Yet, despite his shock at the more liberal tendencies of Afrin's residents, Bassam does not agree with Ahrar al-Sharqiya's efforts to promote more conservative dress.

"In any case, I think it is more important to provide services to the region instead of spending money on advocacy campaigns," he says.

"No one wants to see any conflict between the displaced and the local population."

The administration of the city of Afrin and its environs is currently supervised by seven local councils under the umbrella of the opposition Syrian National Coalition.

The councils were established from civil society, with Kurdish, Arab and Turkmen origins.

Engineer Zuhair Haidar, the head of Afrin city's council, tells MEE that the posters were erected in the city without the body's approval.

He says the campaign is "unlicensed" and that some of the posters have been removed by the local police.

Residents have also targeted the banners, tearing some of them down in a show of disgust at what they say is interference with their personal freedoms.

Rafiq Abu Mohammed, an Afrin resident, says he thinks the posters are correct in principle, but the way they have been spread is not appropriate for the people of the region.

"It is a clear criticism of the Kurdish people. The issue is the customs and traditions of the people of the region. The non-wearing of veils by women in Afrin city is not due to lack of religion, it is just a habit, no more," he tells MEE.

"I think that advocacy campaigns can be more successful in Idlib province, where people have more religious awareness. Perhaps it could succeed in Afrin through educating civilians in mosques."

According to Abu Mohammed, the posters could give outsiders the wrong picture of life inside Afrin.

"Some people are taking advantage of the presence of banners by saying that the area is controlled by hard-line Islamic organizations, but that is not right," he says.

"The result of these posters has been negative rather than positive."

While Idlib may be a more naturally conservative area of Syria than Afrin, a similar campaign to encourage modest dress and religious conservatism there has also faced resistance.

Posters much like the ones now seen in the former Kurdish stronghold have been widely distributed in Idlib city since it was taken by rebel groups in early 2015.

There, the campaign is led by Hayiat Tahrir al-Sham (HTS), which under its previous guise, the Nusra Front, acted as the Syrian branch of al-Qaeda and now is largely in control of the province and its capital.

Much like in Afrin, however, Idlib residents grew resentful of the didactic posters and have tried to remove them, with little success.

According to the former director of Idlib local council’s media office, Ahmed Ghajar, soon after Nusra took the city in 2015 it launched an "Islamic awareness" campaign across the province, with the consent of the Army of Conquest, another prominent rebel group.

"The campaign involved writing Islamic phrases on most of the walls in Idlib. It would have been better to put up road signs rather than this graffiti," he says.

"There was popular discontent with the campaign because it cost more than $25,000, while the population was in desperate need of services."

Ghajar says the opposition's enemies used the campaign to portray Idlib in a bad light.

"The colours used to paint the phrases were exploited by counter-revolutionaries, helping to portray the area as black and classify it as a terrorist zone," he says.

"The campaign was overseen by a small number of people, who do not represent the entire population of Idlib." 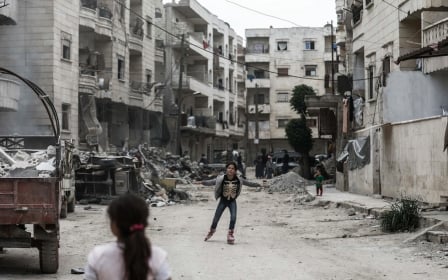 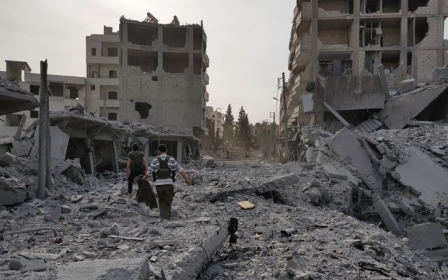 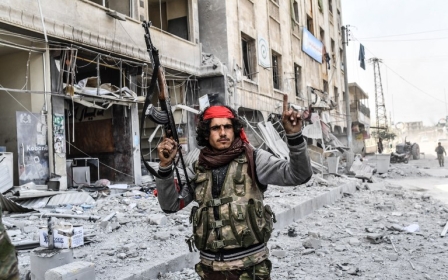