Kurds locked out of Afrin as Ghouta refugees take their place 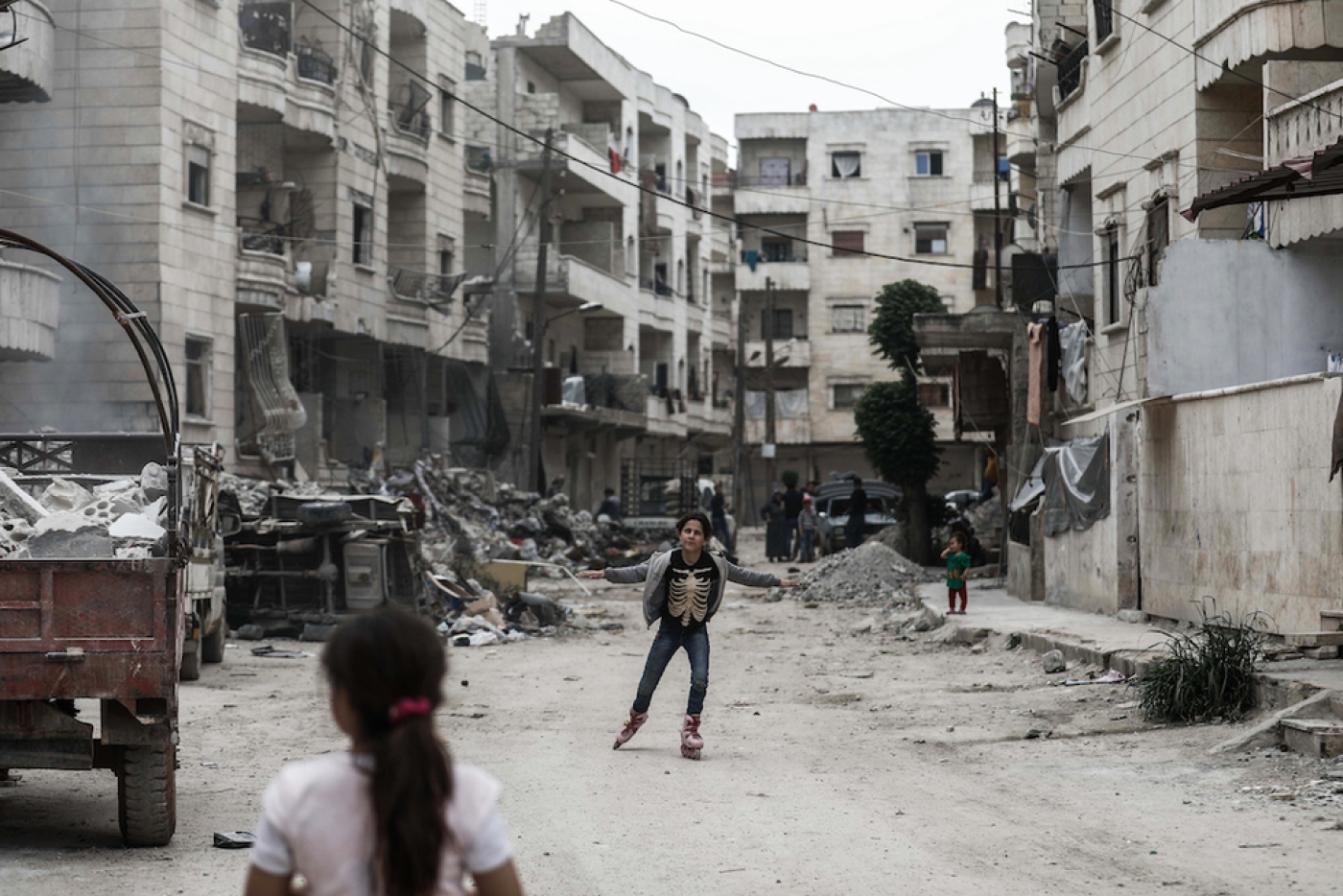 Children roller-blade in the street in the northern Syrian enclave of Afrin that Ankara-backed forces captured from Kurdish fighters in recent months (AFP)
By
Ammar Hamou for Syria Direct
, Barrett Limoges

Huddled aboard a caravan of white buses, Khalid al-Hassan and his family emerged from years of siege and bombardment in the east Damascus suburbs in March and travelled north. They were just a few among thousands of shell-shocked evacuees who did the same under a surrender agreement with the Syrian government.

Hassan and the other passengers in his convoy, coming from Eastern Ghouta’s central sector, arrived in rebel-held Idlib city on 25 March. There, they found a city under bombardment and already bursting at the seams with displaced civilians.

We, the Kurdish component [in the FSA], are trying to work against this with all our energy. But we are in the minority

So, Hassan picked up his family one week after arriving in Idlib and continued north to relatively calm Afrin – where he said a hero’s welcome awaited.

Rows of vacant houses sat waiting to be distributed, free of charge, to displaced civilians escaping the devastation of Ghouta, said 29-year-old Hassan. A member of a local group affiliated with the Free Syrian Army (FSA) told him that one of the houses was now his, if he only chose to take it.

However, the alleged offer was not an innocent gesture of charity, and these homes were not abandoned voluntarily. They were the spoils of war, the property of Kurds who were displaced from Afrin in recent months by widespread bombing and ground fighting during Turkish-backed Operation Olive Branch.

Hassan says that he refused the offer of a free house, unwilling to become a passive participant in someone else’s displacement so soon after experiencing it himself.

“We are displaced from our homes, and are coming as guests to this region,” he told Syria Direct. “We are not accepting these houses for free without the permission of their owners.”

However, civilian and military sources in Afrin say that “dozens” of other Eastern Ghouta families, with few other options, have moved into the vacant homes.

The Syrian government’s seizure of Eastern Ghouta in mid-April sent thousands of newly homeless residents to the opposition-held north in a series of evacuations.

There, some of the displaced have been resettled in the empty houses of Kurdish residents who fled Afrin in recent months before advancing Turkish and FSA forces. Several witnesses in Afrin, as well as displaced Kurdish homeowners, told Syria Direct in recent days that private residences are being seized and given away by Turkish-backed militias.

We are displaced from our homes, and are coming as guests. We are not accepting these houses for free without the permission of their owners

One Kurdish FSA commander in Afrin, speaking on condition of anonymity, confirmed the accounts of home seizures and redistribution to Arab families this month.

“We, the Kurdish component [in the FSA], are trying to work against this with all our energy,” the commander told Syria Direct. “But we are in the minority.”

Turkey launched its Operation Olive Branch in January, in coordination with some 25,000 FSA-affiliated rebels, with the stated aim of “eliminating terrorists” in Afrin. Prior to the operation, Afrin was largely governed by the Kurdish Democratic Union Party (PYD) and its military wing the People's Protection Units (YPG), which is a member of the US-backed Syrian Democratic Forces (SDF).

Ankara considers the PYD to be an offshoot of the Kurdistan Workers' Party (PKK), which has waged an armed insurgency inside Turkey for decades.

Turkish-backed forces captured most of Afrin from the YPG in mid-March, following months of clashes, air strikes and artillery fire that caused hundreds of civilian deaths, destroyed villages and shattered much of the area’s infrastructure.

More than 137,000 Afrin residents remain displaced outside their cities and villages as a result of the Turkish military campaign, leaving entire neighbourhoods vacant and thousands of houses unprotected from looting and illegal seizures, according to Sara Kiyyali, Syrian researcher at Human Rights Watch.

“A lot of those houses are empty right now,” she told Syria Direct this month. “They were primarily Kurdish residents... [and many] are uncomfortable returning to live under Turkish control.”

Muhammad Balou, a PYD supporter who fled Afrin during the Turkish-backed campaign and is now living in Erbil, Iraqi Kurdistan, is one of those residents. He says his family back in Afrin regularly updates him about the fate of his apartment there.

Last week, Balou received word that the lock on his front door was broken and a family from Eastern Ghouta moved into the residence he had spent a lifetime saving for.

“I worked many years to buy my apartment in Afrin, and even took out a loan,” he told Syria Direct. “Now people have entered and begun living there. By what law, I don’t know.”

After losing his home to an Arab family from Eastern Ghouta, Balou says he does not know if or when he may be able to return to Afrin.

“My decision to get out of my city and not to return to it was the right one,” he says. “I am known for my opposition to Operation Olive Branch and to the Turks.”

When Turkish-backed Syrian forces seized Afrin city in mid-March, the chaos was marked by ominous episodes of ethnic symbolism, as fighters tore down a statue of the legendary Kurdish hero Kawa and raised the Turkish flag over the battered skyline.

These same armed groups have since thrown up checkpoints and reportedly blocked some displaced Kurds from returning to the province. Several people told Syria Direct this month that FSA factions were preventing the return of their friends and family to the region.

“[Recently] one of my friends and his son were trying to enter a Turkish-controlled area,” said Muhammad Shams al-Din, a Kurd who was displaced to Gaziantep in Turkey at the beginning of Operation Olive Branch.

“He was not allowed in, because [guards told him] he is a Kurd from Afrin.”

Samar al-Afrini, a Kurd living in Jazira canton, told a similar story. She says her family members have been unable to pass checkpoints and return home to Afrin.

“Groups with Operation Euphrates Shield stopped them from doing so,” she says. Syria Direct could not independently confirm either account.

Reports of residents not being allowed to return to Afrin amid ongoing home theft and property redistribution have sparked fears of demographic engineering and reignited bitter memories of the Kurdish people’s troubled history in Syria.

In 1962, a year before the Baath Party seized power, a national census stripped citizenship from thousands of Kurds, reclassifying them as "foreigners" and requiring them to carry red cards at all times - a second-class status that still affected approximately 300,000 Kurds when the uprising began seven years ago.

Forced population transfers were also a legacy of Bashar al-Assad’s father Hafez, who as president settled thousands of Arab families onto confiscated Kurdish lands in the 1970s, and banned teaching of the Kurdish language as part of his "Arabisation" policy. These mirrored similar policies that aimed to suppress Kurdish language and autonomy north of the border in Turkey, many of which continue to this day.

When Turkish-backed forces captured Afrin, the existing governance and security structures of the PYD-led administration ceased to exist, leaving a vacuum.

Even ardently nationalist ministers in Turkish President Recep Tayyip Erdogan’s Justice and Development Party (AKP) admit the necessity of quickly restoring civilian government to the conquered Afrin canton. However, steps to implement this transition on the ground have been halted by Turkish authorities, who fear that local elections could return the PYD or its sympathisers to power in the canton.

The formation in Afrin of an interim local council on 26 April, tasked with beginning the political transition and restoring basic services for the next six months, was the first concrete step toward civilian government. While representatives were elected by city elders under the auspices of Turkish occupation, the new council is composed entirely of local residents, with Kurdish members having a one-seat majority within the 20-member body.

Zahir Ali, a member of that local council, says that the takeover of Afrin by non-Kurdish forces and the collapse of local political authority has left displaced Kurds open to unchecked abuse – something on full display last month as armed groups lawlessly looted and ransacked the homes of families who had fled before their advance.

“After the end of the hostilities, when Kurds decided to return, they encountered resistance from the regime, the army, and the Turkish forces,” Ali told Syria Direct. “They have been stopped at the [checkpoints] and hundreds of families have not been allowed to pass.”

A mechanism must be found to handle [these people] and not turn them into internal social problems. The people of Ghouta and Afrin are both important, and both have suffered

Ali attributes these actions to individual FSA groups on the ground, adding that a return to normality and rule of law can only begin with the full return to civilian authority and reestablishment of local institutions.

“There must be judicial grounds to summon those who have been subjected to security breaches, as well as to account for them,” he says. “We demand the withdrawal of the armed factions and the acceleration of the formation of civilian police made up of people from the region.”

Public relations officer for the local council, Azad Osman, says that a workable solution for absorbing incoming families from Eastern Ghouta would likely require cooperation with the rebel authorities in neighbouring Aleppo province. He proposes that leaders from both regions meet to coordinate a strategy to manage the newcomers and account for how many Ghouta families are there currently.

“They should form [another] committee to provide accommodation for that number, which can be determined, agreed upon and distributed, whether in the centre of the city or other areas,” said Uthman.

In Afrin, problems related to displacement are only likely to grow, as ongoing military campaigns by the government elsewhere in the country swell the ranks of civilians fleeing or evacuated to the north.

The local council estimates that approximately 50,000 people have taken refuge in Afrin from other parts of Syria, and they expect these numbers to increase in coming weeks amid renewed violence and evacuation negotiations in north Homs and Yarmouk camp.

As the numbers of the displaced grow, so too could the pressure to make use of thousands of empty Kurdish houses abandoned throughout Afrin.

“A mechanism must be found to handle [these people] and not turn them into internal social problems,” says Afrin council member Ali.

“The people of Ghouta and Afrin are both important, and both have suffered.” 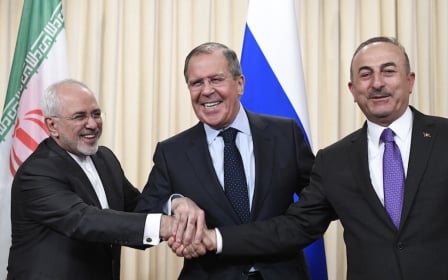