For volunteers not accepted onto the much-publicised evacuation deal, escaping to Idlib is a case of getting out of the frying pan and into the fire 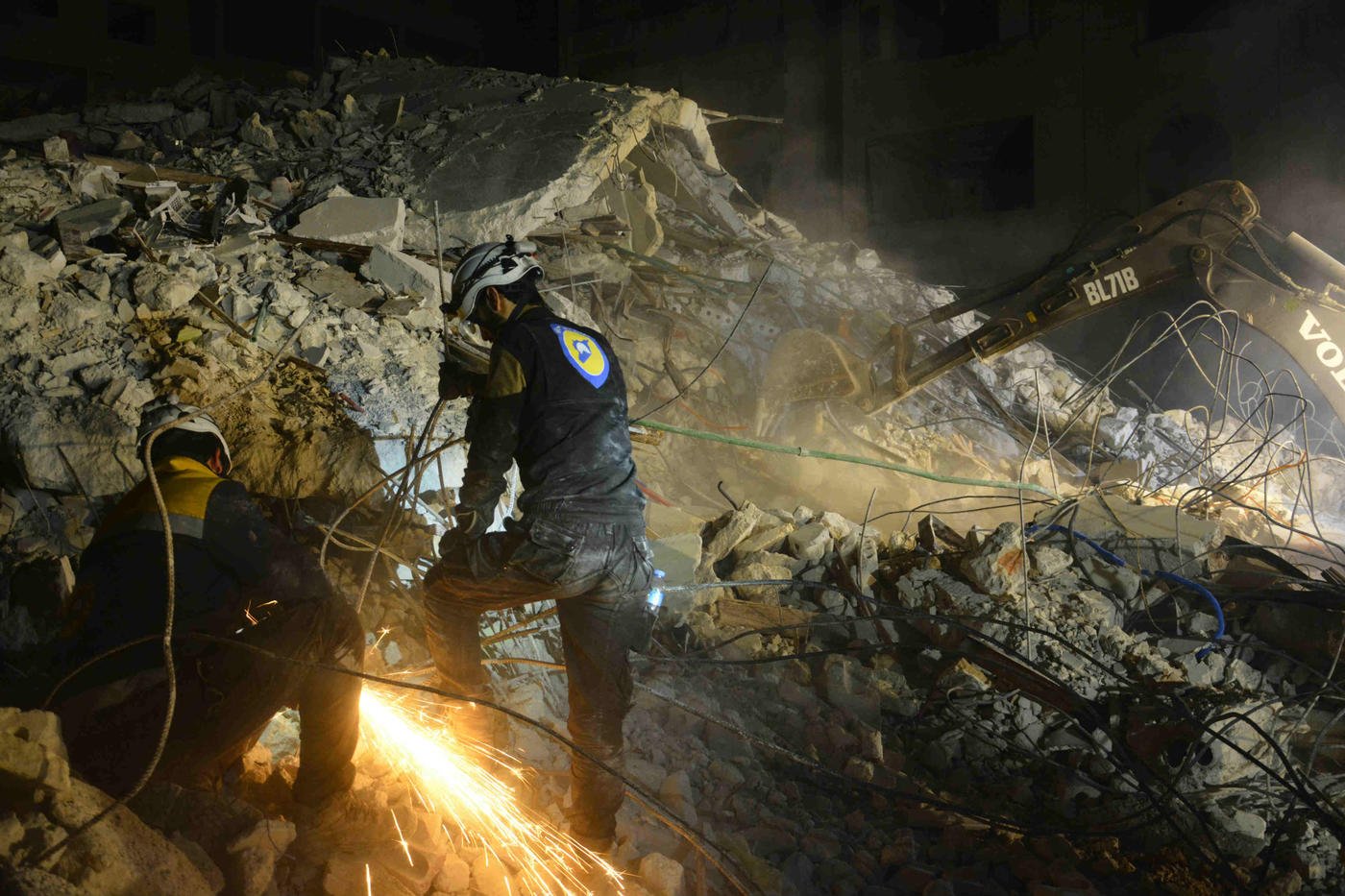 IDLIB CITY, Syria – Like the 98 White Helmets and their families evacuated out of Daraa province to Jordan last week, Muaaz Abu Muhannad was trapped in southern Syria by advancing pro-government forces.

Yet unlike his colleagues, who were herded out of danger through the Israeli-occupied Golan Heights thanks to an international deal, the volunteer was abandoned by the western governments involved in the operation.

Lacking sufficient documentation after enduring seven years of war and a recent offensive that displaced Abu Muhannad along with hundreds of thousands of others, he was refused passage.

Now he is in opposition-held Idlib province in Syria’s north, having defied death by passing through Syrian government territory.

However, for Abu Muhannad and the approximately 3,000 other White Helmet volunteers now in north Syria, the danger is far from over.

“It was a great risk. I only just managed with some White Helmets to get to the buses bound for Idlib,” he told Middle East Eye. “Praise be to God we arrived.”

Though Abu Muhannad escaped thanks to a deal brokered between rebel groups and Damascus, many others did not.

“There are many volunteers [still in the south] ... They preferred to stay in Daraa because they thought that going to Idlib would be an adventure and a risk. Others wanted to go north but they could not, unfortunately,” he said.

Raed al-Saleh, director of the White Helmets, told MEE his organisation is working to make sure as many other volunteers as possible can follow Abu Muhannad’s path.

“Unfortunately, during the evacuation to Jordan many volunteers were refused access because they did not have any documentation proving their identity or for other reasons related to the host countries' conditions,” he told MEE.

“We are now exerting all our efforts to evacuate the remaining stranded elements in Daraa and Quneitra towards the Syrian north.”

Canada, Germany and the UK agreed to take some of the White Helmets who were evacuated via the Golan Heights and into Jordan. The UK indicated it would identify those rescuers and their families eligible to come to the UK through the UN High Commissioner for Refugees (UNHCR) scheme for vulnerable persons, officials said.

Founded in 2013 as President Bashar al-Assad’s forces stepped up their attacks on rebel-held areas of Syria, the search and rescue White Helmets group, officially known as the Civil Defence, has had branches across opposition-held areas of the country and says it has saved some 116,000 people from bombing raids.

The volunteers have had a prominent place in the war, garnering financial and material support from western nations.

Yet the White Helmets’ prominence has also earned them enemies.

Assad, his allies and his supporters accuse the group of being an offshoot of the Nusra Front, the onetime Syrian branch of al-Qaeda which operated in many of the same areas that the Civil Defence has.

As a result, the White Helmets and their supporters believe that they are particularly threatened when the Syrian government retakes areas they are in.

“When I was in Daraa, we were told by [rebel fighter] Abu Bakr Hassan, who was negotiating with the Syrian government forces, that Damascus refuses to reach reconciliation and a settlement with the White Helmets at all.”

Moreover, after the Israeli military provided support for the southern White Helmets and their families who crossed over the Golan into Jordan, the group’s sceptics have found new ground to attack them on.

"New accusations of dealing with Israel have been stuck on us, because the previous batch was evacuated to Jordan via the Israeli-occupied Golan,” Abu Muhannad said.

“Damascus also accuses us of fabricating chemical attacks in different parts of the country and accuses us of cooperating with Europe."

For those who do make it north to opposition-held areas, only a temporary respite is expected.

Many White Helmets have been displaced from elsewhere and are now settled in Syria’s north.

As the government, supported by Russian airpower and various Iranian-backed militias, has taken former rebel strongholds such as east Aleppo, the Eastern Ghouta and Homs, the volunteers have sought asylum along with the hundreds of thousands of other displaced civilians and fighters.

"The Civil Defence department in northern Syria provided a new place to work to all the displaced members. We took a small break and then returned to work,” Samer Kartooma, a volunteer from the Damascus countryside now in Idlib told MEE.

“Our goal is to protect civilians and provide basic services to them. It is the same work we did in the Eastern Ghouta; we will stay here to complete our humanitarian mission.”

However, local media reported earlier this month that Assad’s ally Russia told rebels in the south to avoid going to Idlib, warning it would be the Syrian government's next target.

Idlib now holds more than two million people, more than half of whom are displaced from elsewhere.

Turkey, which borders the province to the north, has closed its borders, refusing to take in more Syrians – leaving those wanting to flee the impending government assault trapped.

In fact, a bloody assault and targeting of Civil Defence volunteers was foreshadowed by Assad last week.

"Idlib is a priority for the Syrian army and the White Helmets’ fate is reconciliation or liquidation," he told Russian media.

With such a threat looming and in response to an appeal to protect the Civil Defence volunteers, the United Nations released a statement on Monday calling for the safety and protection of aid workers in Syria.

Unfortunately for those who remain, a similar evacuation from the north seems unlikely.

"There is no plan at the moment to remove the White Helmets from Syria’s north, despite the arrival of hundreds of volunteers from Syrian cities as a result of the ongoing displacement,” Saleh said.

“We have no plan at this time in the event of military operations in the north of Syria, except to carry out our duties to help the people and rescue them from the rubble."