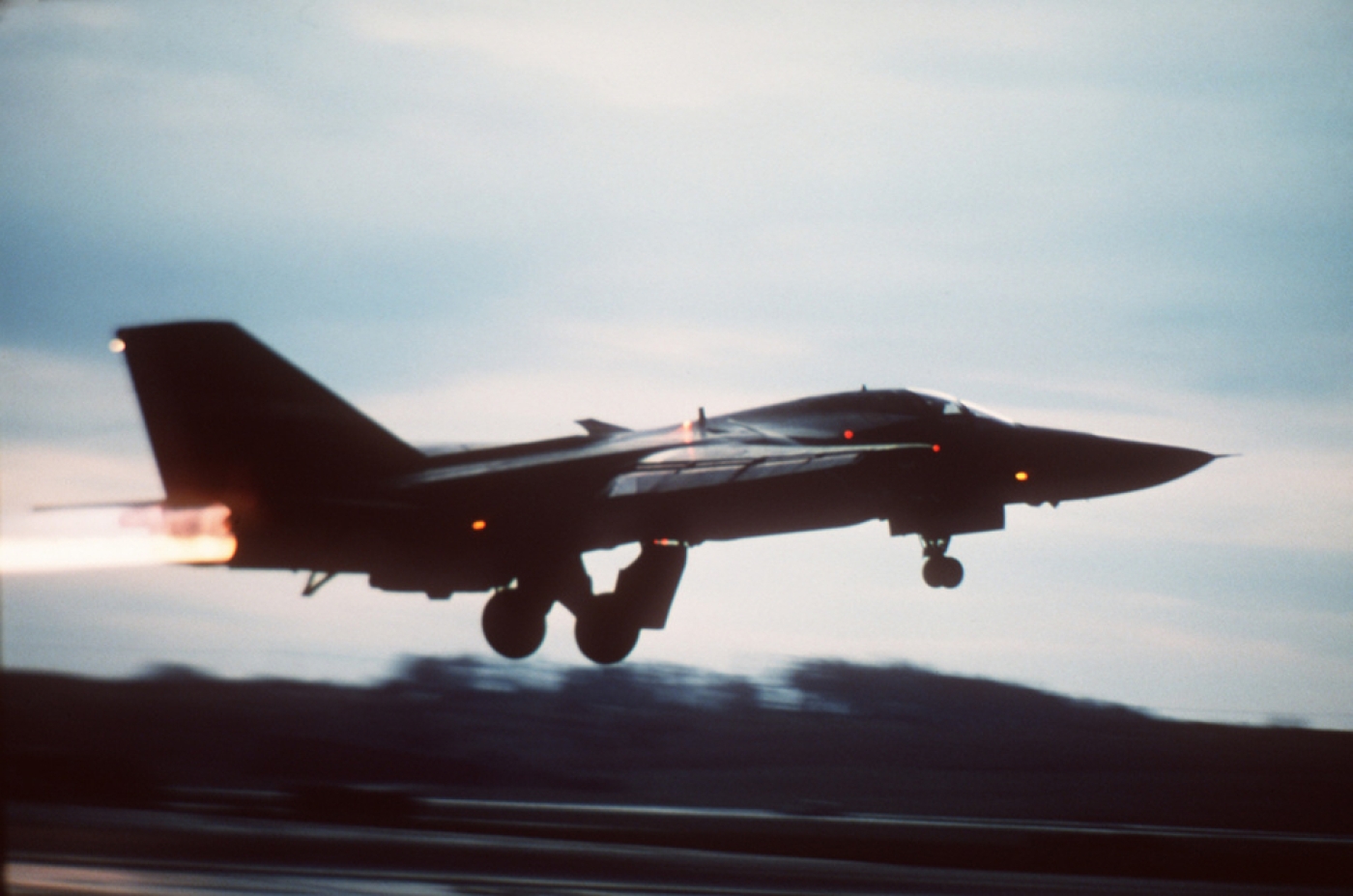 US warplane takes off from RAF Lakenheath in April 1986 to take part in airstrikes in Tripoli (PICRYL.com)
By
Richard Norton-Taylor

LONDON - West Berlin’s La Belle nightclub was a popular haunt for American soldiers in April 1986, when a bombing by Libyan agents killed two US servicemen and a Turkish woman, as well as leaving 229 others injured.

Secret British government files released on Friday have shed light on what happened next as Ronald Reagan’s US administration sought vengeance on Libya’s leader Muammar Gaddafi, who they held responsible for the attack.

Denied the right to fly over French, Spanish and Italian airspace, as well as the use of European continental bases, British prime minister Margaret Thatcher allowed US bombers based in the UK to attack targets in Libya’s capital Tripoli.

American warplanes had to take a detour over the Atlantic Ocean and through the Straights of Gibraltar, adding more than 2,000 kms each way and requiring multiple refuelling from tanker aircraft.

Forewarned by a telephone call from Italian Prime Minister Bettino Craxi, Gaddafi and members of his family left their residence in the Bab al-Azizia compound moments before the air strikes began.

But 60 Libyans died in the attack. Among them, according to reports at the time, was Gaddafi's adopted infant daughter Hana, although reports in 2011 raised questions about accounts of her death.

The need to keep close to leaders in the Gulf has been a constant for British governments and Britain’s foreign intelligence service, MI6, in particular. But relations with other leaders in the Middle East and North Africa have been very different.

Saddam Hussein, considered a British and US ally during the Iraq-Iran war of the 1980s, became, after the invasion of Kuwait in 1990 and the subsequent Gulf War, an enemy the British government was only too eager to eventually help topple in 2003.

Gaddafi offers another example; an authoritarian leader once considered an enemy who became a Western ally in the "war on terror", only to fall out of favour once again when he responded to the 2011 revolution against his decades-long rule with violent force.

In the mid-1980s, Gaddafi was a notorious figure in the UK who smuggled arms to Irish Republican Army (IRA) militants fighting the British army and loyalist paramilitaries in Northern Ireland and waging a bombing campaign on the British mainland.

In 1984, a Libyan intelligence agent shot dead a British police officer, Yvonne Fletcher, from inside the Libyan embassy in London.

But things changed. As the 20th century gave way to the 21st, Prime Minister Tony Blair used Gaddafi’s decision to abandon his nuclear and chemical weapons programme to sign lucrative oil and gas contracts with Britain’s former enemy, culminating in the 2004 “Deal in the Desert”.

As Middle East Eye has extensively chronicled, MI6 helped seize Gaddafi’s opponents and sent them to Tripoli, where they were tortured. The country's spy services engaged in mutual intelligence-sharing operations, the extent of which is still being revealed.

In the richest of ironies, the evidence of British collusion was revealed after the British-backed NATO bombings in 2011 that led to the downfall and death of Gaddafi when an air strike destroyed the headquarters of his intelligence service.

One intriguing file in the batch of British secret documents released on Friday, reveals the deep concern the US military had about the security of Menwith Hill, in North Yorkshire, America’s biggest eavesdropping centre in Europe, in light of the storm of protest triggered by the Tripoli bombing.

Percy Cradock, a senior British diplomat and intelligence official, told the prime minister’s office on 10 Downing Street that the station chief at Menwith Hill “was particularly concerned about large Muslim communities in the area, not least in Leeds”.

Cradock added: “In June 1986, a car containing three men of ‘Middle East appearance’ particularly worried him. They turned out to be anti-Gaddafi Libyans, who were doing nothing particularly sinister... It is possible that highly coloured accounts of the situation filtered back to Washington. But all is in order now.”

In common with all US bases in Britain, Menwith Hill – a base run by GCHQ’s American partner, the National Security Agency – is disguised as a British Royal Air Force station.

Heated arguments in the House of Commons and the media over the 1986 bombing prompted the former prime minister, Edward Heath, to reveal that he had to deal with “an equally difficult question during the 1973 Yom Kippur war in the Middle East [between Israel and Arab states led by Egypt and Syria]”.

Heath told MPs: “We were asked for the use of bases, including those in Cyprus. The reply which the government sent to the United States was no.”

Heath’s veto – unprecedented for a British prime minister – was his response to a decision by then US secretary of state, Henry Kissinger, to cut off intelligence-sharing with Britain – the core of the “special relationship” – because of the pro-European Heath’s refusal to wholeheartedly support US foreign policy.

US requested to use bases for Middle East spy flights

In a note stamped “SECRET”, Christopher Mallaby, a senior British diplomat, told Thatcher’s foreign policy adviser Charles Powell in April 1986 that the US had said it would like to use its British bases to launch spy flights “over the area of conflict in the Middle East”.

The British agreed but subject to strict conditions, including that “the product [intelligence gathered by the spy flights] should be given to us but no one else (eg. the Israelis)”.

The Americans considered the conditions so stringent that they amounted to a “refusal in disguise” and did not pursue the matter.

But Mallaby warned Powell that “unhelpful comparisons might be drawn between the allegedly independent approach of 1973 with the present case” – a reference to the 1986 Tripoli bombing.

In other words, the Heath example might provide ammunition to those then opposing the 1986 strikes, just as the decision by the Labour leader, Harold Wilson, not to send British troops to Vietnam was used many years later by those opposed to the US-led invasion of Iraq in 2003.

The newly released documents reveal the huge sensitivity over the question of whether a British government has a veto over the use of US bases in Britain, something that has never been fully resolved despite the formula that there would be “joint decisions”.

Thatcher referred to what she called the Churchill-Truman “arrangement” that there were “no circumstances in which American aircraft based in this country may be used without our consent in military operations planned by the United States”.

Correspondence on crucial points of the discussion between British ministers and officials is carefully redacted, with paragraphs cut out from the original paper files, which are then photocopied without the sensitive passages.

Heath’s veto was the last. Ever since, successive British governments have agreed to official US requests for the use of UK bases and intelligence cooperation between the two close allies has increased, as the whistle-blower Edward Snowden most clearly demonstrated.

The NSA contributes more and more financially to GCHQ intelligence-gathering operations as eavesdropping technology gets increasingly sophisticated and expensive.

Elsewhere in the files released at the UK’s National Archives, material can be found relating to allegations that Margaret Thatcher’s son Mark was involved in procuring British arms deals with Saudi Arabia.

This includes a 1994 note that Mark’s mother was “absolutely satisfied” that the multibillion pound al-Yamamah (Arabic for “dove”) oil-for-arms deal was “properly negotiated” between the two governments.

What is now known is that years later Tony Blair stopped a Serious Fraud Office investigation into alleged kick-backs for fear that the Saudis would be so angry that they would stop all intelligence cooperation with Britain. (British government files relating to Mark Thatcher’s involvement in the construction of a university in Oman remain closed.)

Another file among those released is a 1993 British Foreign Office report into “Islamic Fundamentalism in the Middle East”.

It noted: “Iranians are peddling mischief throughout the region... Private Saudi money donated for Islamic causes, mosques, schools, etc...  is a common factor in much of the region”.

The main causes of the spread of fundamentalism in the region, it said, were internal – “a failure to resolve economic and social problems, corruption in government and the bankruptcy of political ideologies – Communism, Nasserism, Baathism, etc.”

The files, mainly covering the year 1994, have been released as part of the British government’s plan to reduce the traditional 30-year ban on disclosure to 20 years.