Hopefuls say they would return to 2015 nuclear deal, lambasting Trump for stoking tensions with Tehran The presidential hopefuls vying for the chance to take on Trump in November 2020 warned against a military conflict with Tehran during the debates on Wednesday and Thursday night.

"President Trump is hell-bent on starting a war with Iran," Senator Kirsten Gillibrand said on the debate stage on Thursday.

"My first act will be to engage Iran to stabilise the Middle East and make sure we do not start an unwanted, never-ending war."

Many of the candidates even vowed to return to the nuclear deal that the US president abandoned last year, a move that precipitated recent weeks of escalating tensions between Tehran and Washington.

On Wednesday, nine out of the 10 Democratic candidates on the debate stage raised a hand to say they would return to the Joint Comprehensive Plan of Action (JCPOA), the accord that saw Iran drastically scale back its nuclear programme in exchange for lifting international sanctions.

Senator Cory Booker, the sole candidate who did not pledge to reinstate the pact, said Trump was wrong to leave the agreement in May 2018. Booker said that if elected he would try to improve the deal.

'The president is literally, every single day, 10 minutes away from going to war ... I don't think we should conduct foreign policy in our bathrobe at 5:00 in the morning'

On Thursday, Senator Bernie Sanders also vowed to avoid a military confrontation with Iran, calling for a greater role for the United Nations.

"Let me be very clear," Sanders said. "I will do everything I can to prevent a war with Iran, which would be far worse than the disastrous war with Iraq."

Moreover, Sanders - who is second in the polls behind Joe Biden - criticised the former vice president for voting in favour of the war in Iraq in 2003, when he was a US senator.

"One of the differences that Joe and I have in our record is Joe voted for that war. I helped lead the opposition to that war, which was a total disaster," Sanders said.

He also voiced opposition to the Saudi-led coalition's war in Yemen, denouncing Trump for vetoing a congressional resolution that Sanders had co-sponsored to end US support for Riyadh's war efforts.

For his part, Biden defended his support for the 2003 invasion of Iraq by saying that he helped withdraw US troops from the country when he was Barack Obama's vice president.

"I was responsible for getting 150,000 combat troops out of Iraq and my son was one of them," Biden said.

He also pledged to repeal the Authorisation for Use of Military Force (AUMF) that gave then-President George W Bush broad power to go after al-Qaeda militants following the 9/11 attacks.

Democratic lawmakers fear that Trump may use the AUMF to attack Iran without congressional approval.

The debates came amid heightened tensions between Iranian leaders and the Trump administration, which has accused Tehran of planning to attack US forces in the Middle East.

Senator Amy Klobuchar, who competed in Wednesday's debate, called out Trump for authorising, then cancelling, military strikes against Iran only minutes before their launch.

Congresswoman Tulsi Gabbard, who has made her staunch opposition to US military interventions the focal point of her candidacy, called on Trump to "swallow his pride" and return to the Iran nuclear deal.

"Donald Trump and his cabinet - Mike Pompeo, John Bolton, and others - are creating a situation that just a spark would light off a war with Iran, which is incredibly dangerous," she said during Wednesday's debate.

"That's why we need to de-escalate tensions."

This week's debates were the first of several before the Democratic Party picks its nominee for the presidency. Primaries will take place across all 50 states, starting with a vote in Iowa in February 2020. 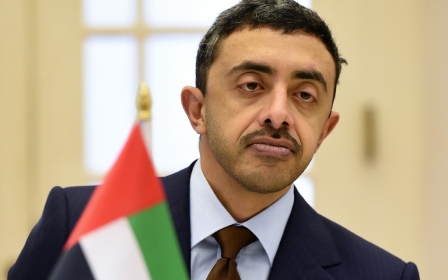