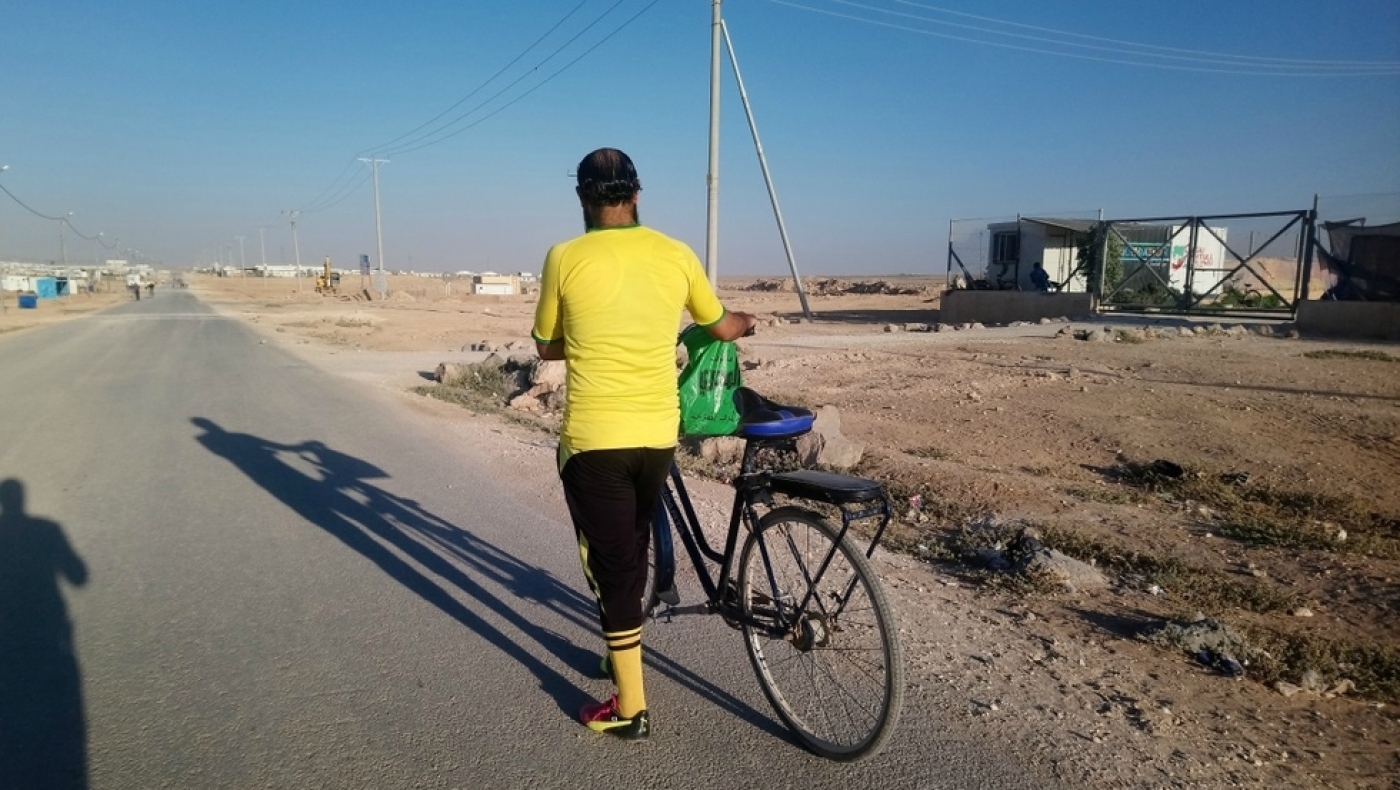 ZAATARI, Jordan - In a dusty metal caravan inside Zaatari, Jordan's largest Syrian refugee camp, Abu Anwar scrolls through photo after photo on his cellphone showing a bombed-out house somewhere in the southern Syrian city of Daraa.

In one, the roof is almost entirely collapsed and all but one wall still stands, pockmarked by bullet holes from fighting between rebel and pro-government fighters.

My home collapsed, my city is destroyed - where am I supposed to go?

"All that's left is that tree," Abu Anwar said of another photo, pointing at a single green bush standing amid rubble in his front yard.

As he speaks, the 66-year-old places his hand over an opening in his throat that allows him to breathe following a protracted battle with cancer. He takes away his hand and pauses for breath after each sentence.

Abu Anwar's adopted home in Zaatari camp, an overcrowded tent city in northern Jordan that is home to roughly 80,000 Syrian refugees, offers little protection from the scorching heat and wind-swept desert dusts that pervade every corner of life in the camp.

The fighting that destroyed Abu Anwar's home and pushed him to flee Daraa in 2012 is largely over. Massive pro-government assaults on rebel positions across central and southern Syria have seen the Syrian government consolidate control over most of the country, including Daraa, in recent months.

Sweeping pro-government advances, putting Damascus back in control of the majority of the country, have raised questions over the fate of an estimated 5.6 million Syrian refugees displaced to neighbouring countries and beyond.

But for Abu Anwar and many Syrian refugees in Zaatari, it is too soon to be talking about return.

Last month, the Russian government announced plans to open a centre in Syria to facilitate the return of thousands of Syrians back to their home country, with one Russian general stating that nearly 900,000 Syrians will be able to return to Syria in the coming months.

In neighbouring Lebanon and Jordan - under great political and economic stress after receiving millions of Syrians since 2011- government officials quickly announced their willingness to participate in talks with Moscow about returns. Negotiations are ongoing between Russia and officials in Lebanon and Jordan, according to statements from both countries.

Jordanian Foreign Minister Ayman al-Safadi told the Jordan Times earlier this month that his country is "working with its partners to create the environment that permits refugees to voluntarily return".

Although Amman has yet to reveal concrete plans, media reports and official statements have contributed to a growing, pervasive discussion about the issue of returns - not least in Zaatari camp. Abu Anwar said it is the "talk of the town".

Last week, two of Syria Direct's reporters visited Zaatari camp and spoke to residents about what it would take for them to return to Syria. Talk of returns, both forced and voluntary, occupied conversations throughout the camp, in restaurants, cafes and temporary homes.

But for nearly all of the dozens of Syrians interviewed during the course of this report, returning home still feels like a distant possibility. Many refugees say that international initiatives to send them home will change little - much of what is left of home is in ruins, and fears of arrest, detention and forced conscription by the government are still widespread.

'I won't risk their lives'

Fawzi Salem spends most of his days following the news from across the border, as relatives in Daraa province update him on the latest developments back home via WhatsApp messages.

The 41-year-old Zaatari resident left Syria to protect his seven children, he said, and "won’t risk their lives again".

"There must be real, clear guarantees of safety before we think of returning," Salem told Syria Direct.

In July, the special Russian envoy to Syria, Alexander Lafrikov, encouraged Syrian refugees to return to their country, assuring returnees that they "won't face any threats" from the government of Bashar al-Assad or the Syrian security apparatus.

But the international community will be "incapable" of guaranteeing the safety of any returning refugees in practice, according to Chicago-based Syria researcher Elizabeth Tsurkov.

"Any real guarantees for the safety of civilians in Syria would need to entail a large international force that would protect [them]," Tsurkov told Syria Direct, adding that that would not be "forthcoming".

Even Russia, which maintains a limited presence in several post-reconciliation areas in Syria, cannot protect a significant number of civilians from armed actors, she said.

"Even if they [Russia] wanted to prevent abuses, they cannot be everywhere at the same time," Tsurkov said.

The United Nations High Commissioner for Refugees (UNHCR) "neither supports nor assists" with any initiative to send refugees back to Syria, UNHCR spokesperson Nida Yassin told Syria Direct.

Although UNHCR assists Syrians in Jordan and Lebanon seeking to voluntarily return, the organisation "recommends that refugees do not return at this point in time, until there is security and stability," Yassin said.

UNHCR has repeatedly asserted that any returns must be voluntary, precipitated by a clear desire from Syrians to give up their refugee status and relocate to Syria.

Even so, returns have already started in some neighbouring countries. In Lebanon, where an estimated one in every six people is a Syrian refugee, President Michael Aoun told a European Union delegation in May that his country would seek a "solution" to the refugee crisis with or without the UN's backing.

In nearby Jordan, as many as 17,000 refugees have returned to Syria since June 2016, with thousands returning to Daraa after a US- and Russia-brokered de-escalation deal in July 2017 prompted many to return to their homes in Syria's southwest.

A spokesperson for the Jordanian government was unavailable for comment before publication of this report.

"Jordan and Lebanon are desperate to rid themselves of Syrian refugees," said analyst Tsurkov. "[But] as long as the Syrian regime continues to carry out arrests, looting and abuses, refugees should not be pressured to return."

'A country with no law'

Despite rapid, sweeping advances by the Syrian government and its allies across most of the country, the war is far from over. The government appears to have already set its sights on the northwestern rebel-held province of Idlib, with officials in Damascus recently hinting at an imminent military operation aimed at retaking the province.

The Syrian army and allied militias continue to clash with rebels on the outskirts of Idlib province, while pro-government media outlets report massive buildups of government troops in the area.

These issues "must become clear" before father-of-three Naif Hamdan will even consider returning, he told Syria Direct.

"I live with my mother and father, who are very elderly. They were going to go back [to Syria], but I told them no - we must go together as a family," the 33-year-old Zaatari resident said.

In the coming months - after the battle for Idlib - Hamdan hopes he will be able to safely return to his native Daraa.

"If the situation in Daraa stabilises ... I will return," Hamdan told Syria Direct.

Although Hamdan completed his mandatory military service years ago, he is still wanted for the army's reserves, he told Syria Direct. Returning to Syria before fighting ceases could mean being forced to fight in Idlib, he fears.

At the same time, Syrians in Zaatari speaking with Syria Direct repeatedly suggested that there are longer-term barriers to return, not least battered homes and new legislation waiting for them in Syria.

Earlier this year, the Syrian government issued Law 10 - a comprehensive property legislation requiring that landowners in select administrative zones prove their ownership within 30 days if they wish to rebuild or claim compensation. If documents are not provided to the government within a month, they risk losing their claim to the land.

If Law 10 is fully enacted, even the land underneath the rubble of some Syrian refugees' homes will be lost, making rebuilding their lives back home an even more untenable prospect.

But many others fear government reprisals. In some areas recently reclaimed by government forces, reports of mass arrests, conscription and detainment have emerged, worsening their fears.

"I won't return while this regime rules Syria," Abu Anwar tells Syria Direct. "It's a country with no law or constitution."

"I don't believe that I, nor my children, nor my parents will be safe in the presence of the regime," Zaatari resident Abu Anwar says, reflecting on several months he spent inside government detention between 2011 and 2012.

In his home in Zaatari Camp, he raises his shirt to reveal the aftermath of torture: a permanently disfigured rib, a chipped vertebrae and other marks left over by what Abu Anwar says were brutal beatings.

"How can I return? Who would hear my voice?"