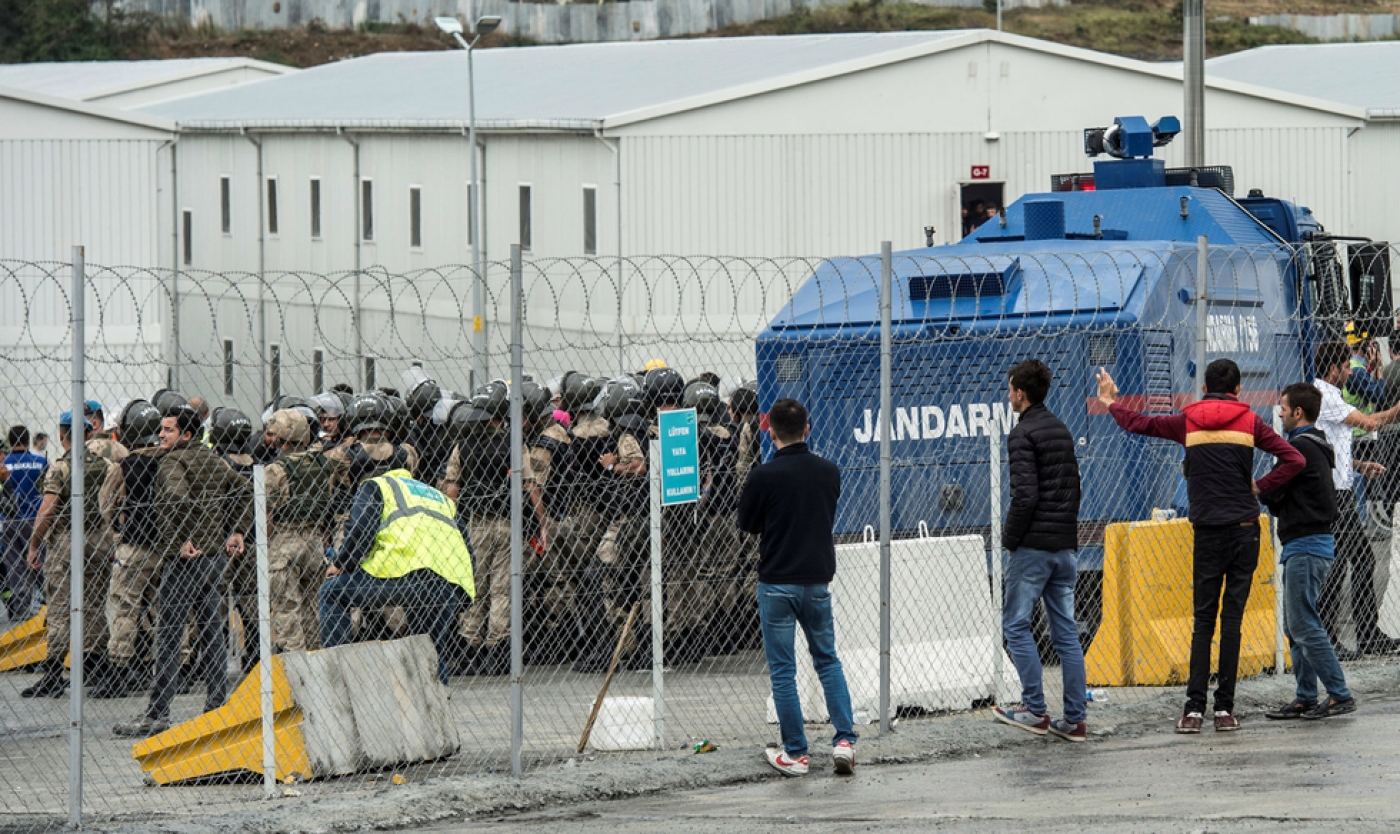 In February, the labour ministry said 27 workers had died at the airport since the start of work there in 2015 (Reuters)
By
MEE and agencies

A leading Turkish union has called for the release of two dozen workers arrested after they protested against poor working conditions while building Istanbul's giant new airport, saying they were being held as "hostages".

Hundreds of workers were rounded up in raids earlier this month and, although most were later released, 24 were remanded in custody ahead of trial by an Istanbul court.

Workers are racing to finish the new airport, a prestige project championed by President Recep Tayyip Erdogan, in time for the 29 October official opening date.

"Airport workers were detained just because they spoke out for their rights. This is not detention, they are being held as hostages," Nihat Demir, secretary-general of Dev Yapi-Is union, told the AFP news agency after a news conference urging their release.

Hundreds of workers from the airport were rounded up on 16 September after protesting and striking over alleged labour violations in the frenetic construction to finish the airport on time.

The protest broke out after a shuttle bus accident in which 17 workers were injured, said Ozgur Karabulut, general manager of the Dev Yapi-Is.

Even if it [the airport] will open as scheduled, it will be dangerous

Alleged labour violations range from lax work safety that led to deadly accidents, to irregular shuttle services to and from the site.

Demir said the union had been denied access to investigate the situation on the ground or to communicate with its members.

"Security does not let anyone in. If... a worker falls and dies, police and security seal of all the area and do not allow anyone to come closer."

Demir said the airport, on which construction started in 2015, was unlikely to be finished on time. "Even if it will open as scheduled, it will be dangerous," he said.

In February, Turkey's labour ministry said 27 workers had died at the airport since the start of work there in 2015, mainly from work accidents or health problems.

Workers have also complained about poor food at the site, bed bugs in their sleeping quarters and delayed salaries.

Pictures they posted online showed cracks in the ceilings and walls of the container homes where they are housed.

Unions have long complained about working conditions and labour safety at the airport, but rights to strike or protest were curtailed under a state of emergency that was imposed after a failed 2016 coup and only lifted in July.

Earlier this month, Erdogan insisted the airport would open on time but acknowledged there would be a transition period where Istanbul's existing main airport - Ataturk International - would continue functioning alongside it, before closing for good.

Inside Turkey
Why is Turkey sending forces to Libya? The answer is gas
Jean Michel Morel
Inside Turkey
Turkish public believes Turkey has no friends - but Turks
Inside Turkey
Istanbul's mayor doesn't want Arabs to invest in Canal Istanbul project