An eight-day siege on the southeastern city, which coincided with the killing of 21 locals, was called off on Saturday only to be renewed 24 hours later 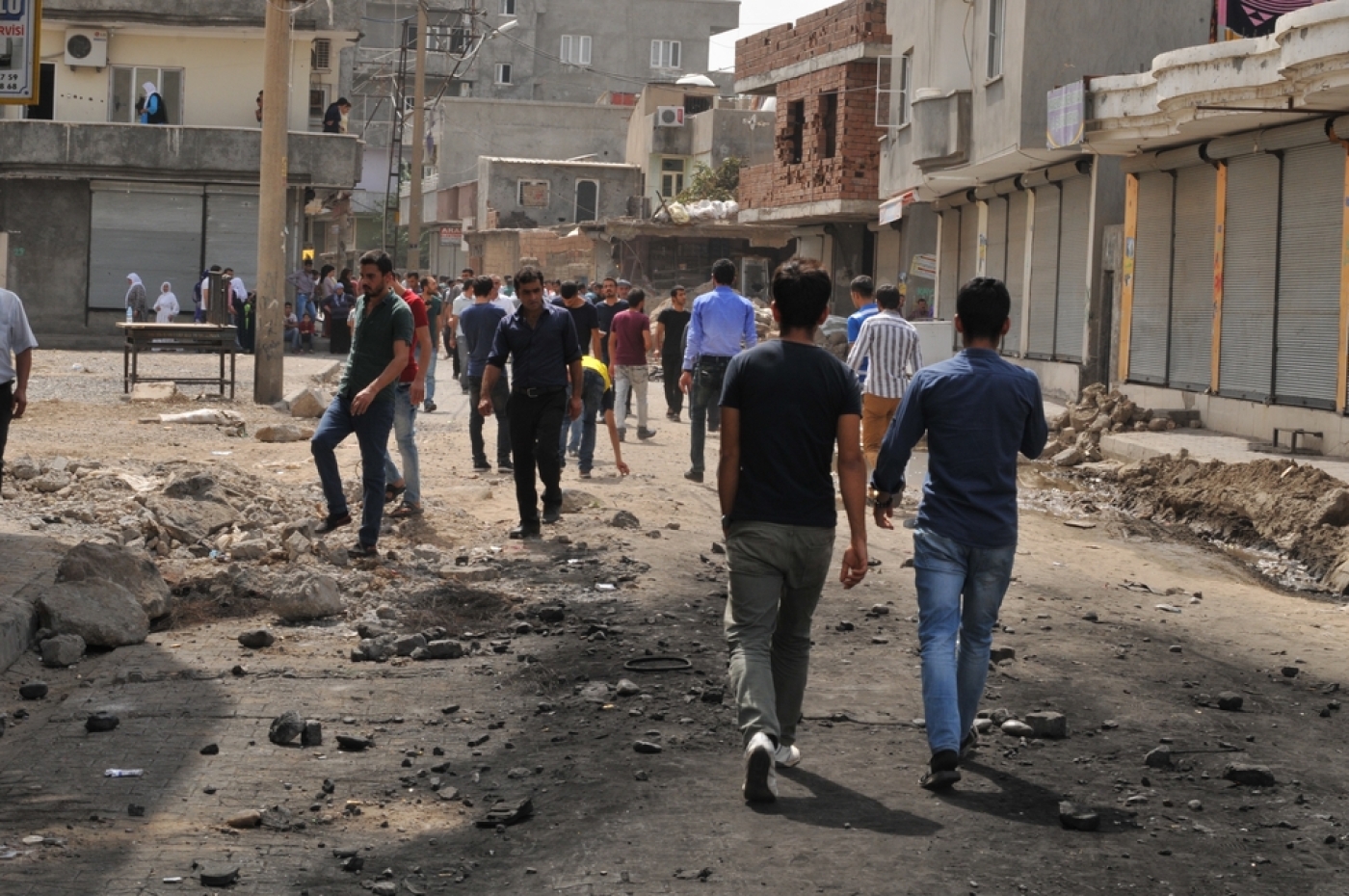 CIZRE, Turkey - After eight days of siege and curfew imposed on Cizre, in southeast Anatolia on the border with Syria, during a Turkish government operation against Kurds in the city, its inhabitants were going back home to scenes of destruction and the stench of death and uncollected refuse.

The curfew imposed on the city ended on Saturday at 7:00pm (17:00GMT), and Turkish army tanks withdrew from the city gateways, letting cars get in.

But on Sunday evening, after the city buried 21 locals who were killed during the siege, Turkish officials reportedly announced that the curfew was renewed.

Before the funerals and the renewal of the curfew, locals on Saturday had greeted Selahattin Demirtas, the leader of the pro-Kurdish Peoples' Democratic Party (HDP), with thousands marching towards the city in order to put an end to the blockade.

After his arrival, and ignited by his presence, the crowds ran after his motorcade, showing the V for victory sign. When he spoke to them, they responded with screams of "Free Cizre”, though danger still lurked. On Saturday evening, a 75-year-old man was shot dead by a sniper of the Turkish special forces, witnesses claimed. They said he was shot while going to get some bread.

The young fighters of the YDG-H (the "Patriotic Youth of Kurdistan"), also have not laid down their weapons, and continue their presence in the Cudi neighbourhood.

A scene of devastation

The destruction shows how violent fighting in the city has been. Used cartridges from Kalashnikovs and other weapons such as Douchkas and BKCs lie scattered around, while pieces of mortars also litter the streets. Huge holes on house walls testify to the use of heavy weapons. Between trenches and barricades, the inhabitants have buried many of the victims in the street. Police forces are keeping a low profile, but a few tanks remain in the city centre. Mobile telephone lines are still cut.

Merchants are returning to do what they can amid destroyed shops - after eight days of siege, food supplies are short supply, especially milk and bread according to the locals. As a result, residents starting to put their lives back on track among destroyed vehicles and burned houses also have to contend with long queues at bakeries and grocery stores. One merchant, Aicha, cannot contain her anger. Turkish President Recep Tayyip Erdogan "is a dictator and a terrorist. He seeks revenge on us because we did not vote for him in the last elections,” she said.
The Kurdish fighters who were involved in the fighting are largely Cizre natives in their 20s, born during the "scorched earth" policy of the 1990s used by the Turkish government in their fight against the PKK (Kurdistan Workers' Party).

Their families were expelled from villages in the region and forced to settle in Cizre. Kawa, a 23-year-old, his face hidden by a black hood and with a rifle in his hands, declared that he is fighting for democracy. “We fight for our families. If we don’t take up arms, they [the Turkish army] will carry on killing Kurds. Erdogan calls us terrorists, but he is the one terrorising the population. We do not kill civilians.”

The young fighters and other residents have for the past week been building sand walls at the entrance of each neighbourhood. Sheets were stretched across the streets to prevent roof-top snipers getting an adequate view, while openings were made between buildings as a protection against the snipers’ shots.

With access to the city's hospital cut off during the siege, injuries - even sickness - could easily prove fatal.  A 35-day-old baby died from his illness as he could not be taken to the hospital. A few bodies have been kept in fridges awaiting an opportunity for a proper burial.

A week under siege

At least 20 people were killed during the fighting - terrorists according to the Turkish government, civilians according to the locals. The majority were shot dead by snipers, according to members of the HDP and local civilians who preferred to remain anonymous for their safety. Adding to the sense of injustice, people in the city claim that the local youths involved - the YDG-H - were not related to the PKK’s guerrilla forces.

“This youth, it is our kids. We know them all, they all come from Cizre. They are not terrorists, they are just patriots,” said Mehmet, a local resident.

The sense of anger and defiance is evident everywhere on the city walls, with the declaration in red letters: “Martyrs never die, their blood will be avenged.”

The anger is not targeted just at the Turkish government - media representatives from across the world now gathering in the city also attract scorn. “Why do all the journalists come at the end of the battle? People care about it only when there are dozens of dead. Europe talks about democracy but does nothing for us,” said one resident, Mahmoud.

The latest outbreak of fighting between the Turkish government and Kurds broke out after a 20 July bombing in Suruc, west of Cizre, carried out by Islamic State but serving as a trigger for the central government to launch air attacks against Kurdish targets in the area. In Cizre, Diyarbakir, Silopi and other cities in the southeast, youths of the YDG-H have also shot at and killed police and barricaded their neighbourhoods.

National elections to be held on 1 November, called after Erdogan's party failed to secure a majority in June,  may lead to a reduction in violence - or further move the country towards a civil war.

Among those returning to their homes and ruins in Cizre, resignation is evident. A 60-year-old woman sweeps her house and picks up the broken tiles. “You know, we are used to burying our youth. I am 60 years old and I have the feeling I have witnessed that my whole life long. The truth is that we have to live together. Look around, we cannot carry on like this.”