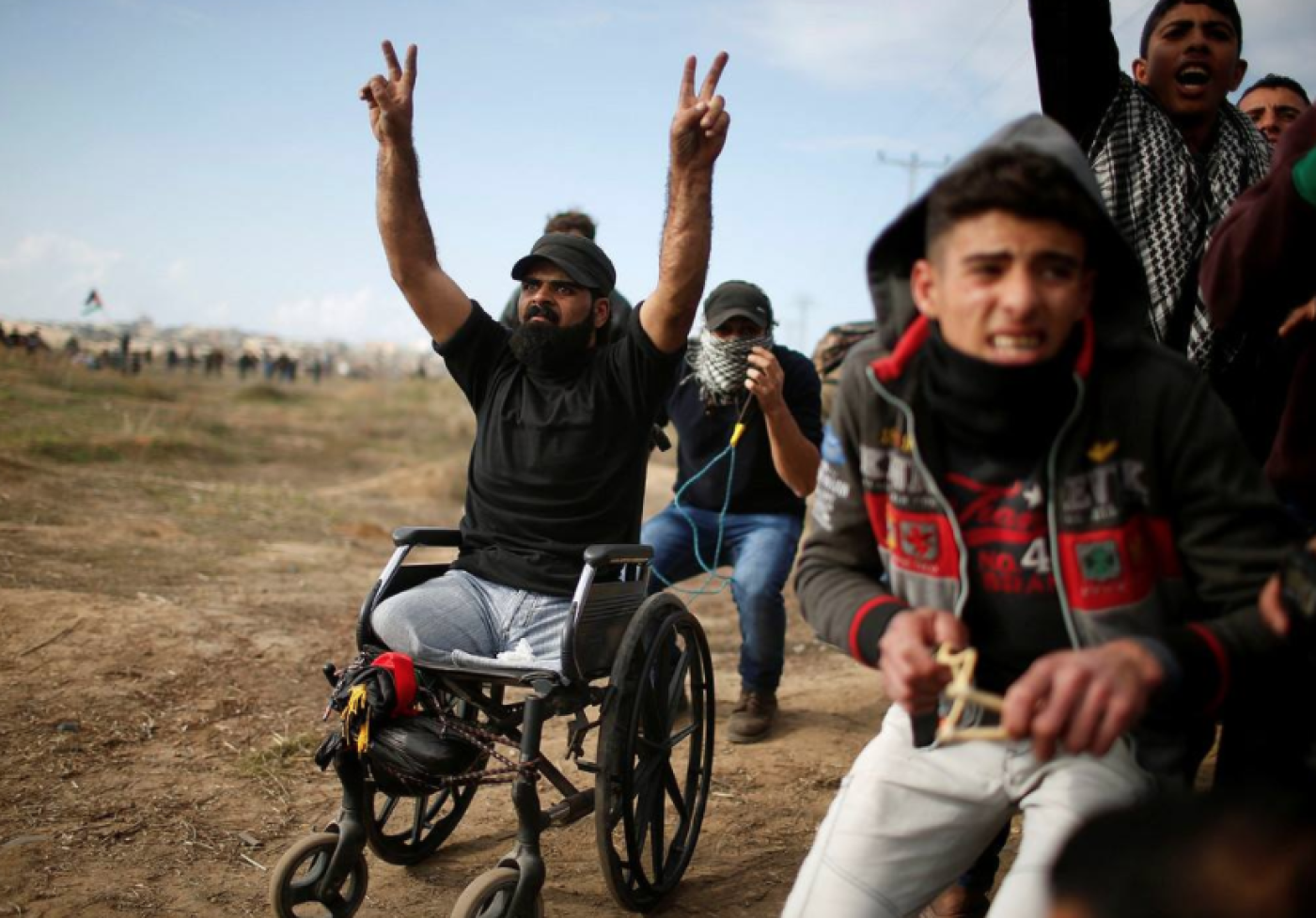 Tributes poured in online on Friday for 29-year-old Ibrahim Abu Thuraya, a Palestinian man killed on the Gaza border during clashes with Israeli soldiers.

He died instantly after being shot in the head by an Israeli soldier, as clashes turned violent in the Gaza buffer zone.

Famed for regularly attending protests on the Gaza Strip, Thuraya came to prominence after losing both his legs and a kidney in 2008 after the Israeli air force fired upon the refugee camp in Gaza where he lived.

He was known for climbing up electricity poles and holding up Palestinian flags during protests. Ibrahim would describe his actions as "resisting despite his disability".

Two days before his death, activists filmed Ibrahim walking on his hands in the buffer zone.

In the video, he called on his fellow Palestinians to join the call to demand America "withdraw" its declaration to name Jerusalem the capital of Israel.

"This land is our land. We are not going to give up. America has to withdraw the declaration it's made," said Ibrahim.

"The most important thing is we are coming here to pass a message on to the Zionist occupation army that the Palestinian people are a strong people."

Thousands are expected to attend his funeral on Saturday to remember the long-time activist who would often be seen leading chants and waving a Palestinian flag.

His body was pictured wrapped in a white Islamic shroud in preparation for his funeral.

He leaves behind 11 family members, including six sisters and three brothers, who relied on him to survive.

Before losing his legs, he was a proud fisherman who would take his small boat to fish the waters near his home where he earned $14 to $19 a day.

Thuraya subsequently supported his family by washing cars in Gaza, where they lived in a crowded refugee camp.

Both his father and mother had high blood pressure and diabetes, which meant they were unable to work.

He would make $248 a month, which he used to pay his electricity, rent and water bill. This was on top of the monthly stipend he would receive for injured Palestinians.

Ibrahim told Shehab News Agency earlier this year that he dreamed of going abroad where he hoped foreign donors would help with providing him with getting medical treatment and prosthetic limbs.

"I wish that I can own a home and I wish those good people can help me, and European countries and Arab countries can help me," said Ibrahim.

"I wish I can get some help and be able to go abroad, and I can get prosthetic legs. But there are lots of costs involved for travel, it’s very difficult."

His day would begin at 7 am where he would gather his supplies, tie his bucket to an old wheelchair and start his journey wheeling himself around Gaza looking for work.

Ibrahim would then join a queue for water and find a car to wash.

After wiping the rims, the sides and cleaning inside the wheel, he would then use his hands to hoist himself onto the boot of the car and work his way to the top of the vehicle.

Speaking about his disability, he told Irish Palestinian activists that he would refuse to take money from car owners without him doing a job.

"I'm not a hobo or a beggar. I can work and make my living," said Thuraya.

"Please never look at my disabled body. Look at the great job I'm doing. It's not the end of the world and life should go on. "