AL-MUKALLA, Yemen: Leaders of an eight-year secessionist movement in Yemen’s restive south are threatening to overturn a 1990 unification deal and declare independence, amid growing frustration that their grievances are being overshadowed by a bloody power struggle raging in the country's northern capital, Sana'a.

Exactly two days after northern Houthi rebels tightened their hold on the Yemeni capital, Sana’a on 21 September, a group of retired army officers in the southern port city of Aden declared the birth of a military council. The council seeks to exploit instability in the north, with the officers announcing the revival of the former state of South Yemen, a key demand for many separatists since 1994.

Aden's council is made up of army soldiers and officers who served in the former South Yemen army before they were forced to retire. The council has said that starting from October - which marks the 51st anniversary of the end of British occupation of South Yemen - it will follow the Houthi model of toppling the government.

The council leaders have now called for massive rallies in southern cities including Aden, and say they will organise campaigns of civil disobedience, all with the aim of taking control of these cities and, ultimately, declaring their much sought-after republic.

Years of neglect at the hands of the central Sana'a government have left many in Yemen's south questioning the value of the 1990 merger between the then Marxist-led south and the tribal-dominated north.

Now, with President Abd Rabu Mansour Hadi bogged down in negotiations with Houthi militias in Sana'a, the separatists are seizing the opportunity provided by a weakened central government to try to see through their claim to independence.

"We think the time is ripe for declaring our state," Brigadier Saleh Tammah, a founding member of the council, told the Middle East Eye. "The south is totally controlled by its people. Most army generals, governors of provinces and directors of districts are southerners.”

To encourage the officials to switch sides, Tammah pledged that they will keep the southern officials after regaining their state. "Those are southerners and we need them," he said.

The separatist movement has a long and varied past.

Following reunification, tensions between various factions in the northern and southern camp failed to subside and finally erupted into a full blown civil war in 1994.

The fighting between north and south dragged on for only a few months, but thousands were killed. Once the hostilities ended, thousands of army officers and public servants in the defeated south were forced into retirement, spawning future resentment.

In subsequent years, rallies of dissatisfied southerners gained momentum, with resentment rising, as many began to complain that they had lost out to the well-connected northerners who were able to carry out systematic land grabs.

Though the south is home to only a fifth of Yemen's 22 million people, it generates the majority of Yemen’s wealth. Up to 80 percent of oil production is in the south, while Aden’s rich fisheries, port and refinery are a hub of economic activity.

In 2007, Yemen’s pro-secessionist sentiment in the south was fully rekindled and the Southern Movement or Hirak - a loose term for the southern-based factions that opposed the regime of former president Ali Abdullah Saleh – was born.

The movement rose to an apex in July 2007, when hundreds of ex-soldiers, who had been forced to leave the army after the 1994 civil war, staged rallies in Aden to demand pay equal to that of their counterparts in the north.

Former Yemeni President Ali Abdullah Saleh refused to discuss their demands and accused them of trying to divide the country. His forces suppressed protests, killing hundreds and injuring thousands of others.

In 2011, when the Arab Spring-inspired uprising broke out, Yemen saw flurries of co-operation between protesters in the north and south. But euphoria soon gave way to disenchantment, as many southerners became convinced that the Islamist-dominated opposition - led by the Islah party - was more interested in its own political ambitions than in addressing the southerners’ grievances.

When Saleh left power in 2012, his southern deputy, Abd Rabbu Mansuor Hadi replaced him. Hadi offered many incentives to convince the southern separatists to join transitional talks, including an official apology for the 1994 civil war. He also reinstated and compensated civil servants and military officers who had lost their jobs after reunification.

However, while the current political turbulence in Yemen has given the southerners their latest window of opportunity, they still have plenty of factors working against them.

One of the key reasons why the Houthis have managed to outmanoeuvre their opponent is their unified leadership, but the southerners lack this sense of centralisation. They are led by many leaders who remain split by bitter differences – an obstacle that has left critics wondering whether the new council in particular, and the southern separatists in general, will have the ability to break up the country and establish their state.

There are also other barriers and the “southerners lack a charismatic figure to bring them together,” said Thabet Saleh, a military expert and retired army officer.

"The differences between the leaders abroad have negatively reflected on the people inside the south. Some leaders are captive to the complexity and differences of the past,” Saleh said.

But many prominent voices are now lending their support to the revitalised separation movement.

Ali Salem al-Beidh - former vice president of Yemen after unification in 1990, and the last president of south Yemen who has been in exile since 1994 - has called for independence. So too has former Prime Minister Haidar Abu Baker al-Attas, exiled ex-president of South Yemen, Ali Nasser Mohammed and well-known activist, Hassan Boum.

Yet, despite the support of such heavyweights, some continue to question just how much they can bolster the southern cause.

"Former [South Yemen President] Ali Salem Beidh is a vastly ineffective opposition leader in terms of achieving gains for the movement or even international understanding - yet he is the figurehead of Hirak," Novak said.

"Another aged personality is Mohammed Ali Ahmed, former [South Yemen] interior minister, whose unclear motives and alliances have not served to unify the movement,” she added.

The defection of some members over the past couple of years has further weakened pro-secession voices.

When transitional talks began in March last year, a hard-lined faction of the movement led by Mohammed Ali Ahmed agreed to join the discussions, provided that their demands for independence were put on the table. When secession was not brought up during the talks, Ahmed pulled out of the talks and vowed to press on, while others merely ignored his power play and stayed in the talks.

Another wave of defection occurred in June this year, when some prominent separatists and founders of the movement, including Nasser al-Nouba, denounced their demands for independence and announced their support of Hadi on national television.

“Southerners are divided among those who demand all-out independence, or re-partition of the unified Yemeni state, those willing to accept the [National Dialogue Conference’s] six-state federal solution that grants them more autonomy and those who believe in two state-federalism," Novak said.

Brigadier Ali Mohammed al-Sa'adi, another founding member of the movement and a friend of al-Nouba, was confident that most army personnel and civilians in the south remain in favour of independence from the north.

"Hirak is a public revolutionary movement and will not be impacted by the defection of any member of the movement. Our path is freedom and independence from occupation,” al-Sa’adi said.

Still, the impact of the defections has been clear in recent months. Every year since the end of the civil war on 7 July 1994, massive rallies have been organised in many cities to commemorate the day which is seen by the southerners as the beginning of the northern "occupation." But this year's occasion went unrecognised in many areas.

Despite this, Tammah, one of the council’s founders, thinks the new group can unite the southerners.

"Those army officers have military know-how, since they graduated from prestigious Russian schools. They want to share their expertise with the young southerners," he said.

In his last speech, Houthi leader Abdel Malek al-Houthi said that he would stand by the southerners until their grievances are addressed, although he did not say that he would support secession of the south.

Tammah responded: "We have nothing to do with what is going in the north. The Houthis want to seize power in the north and our aim is to regain our state [in the south]."

Thabet, the military expert and retired army officer, said that though the Houthis have appeared to be more sympathetic with the southerners than other forces that preceded them, he doubts that the Houthis will relinquish the wealthy south.

"The southerners should know that the ball is their court, and must not expect the northerners to give them their state on a plate,” he said. 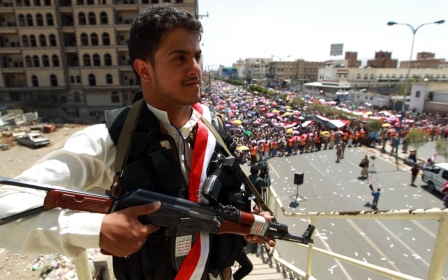