Douma attacks: What we know, and what world powers have told us

Syria's war risks international escalation over an alleged gas attack on Douma. Here is what we know happened, and what we're being told 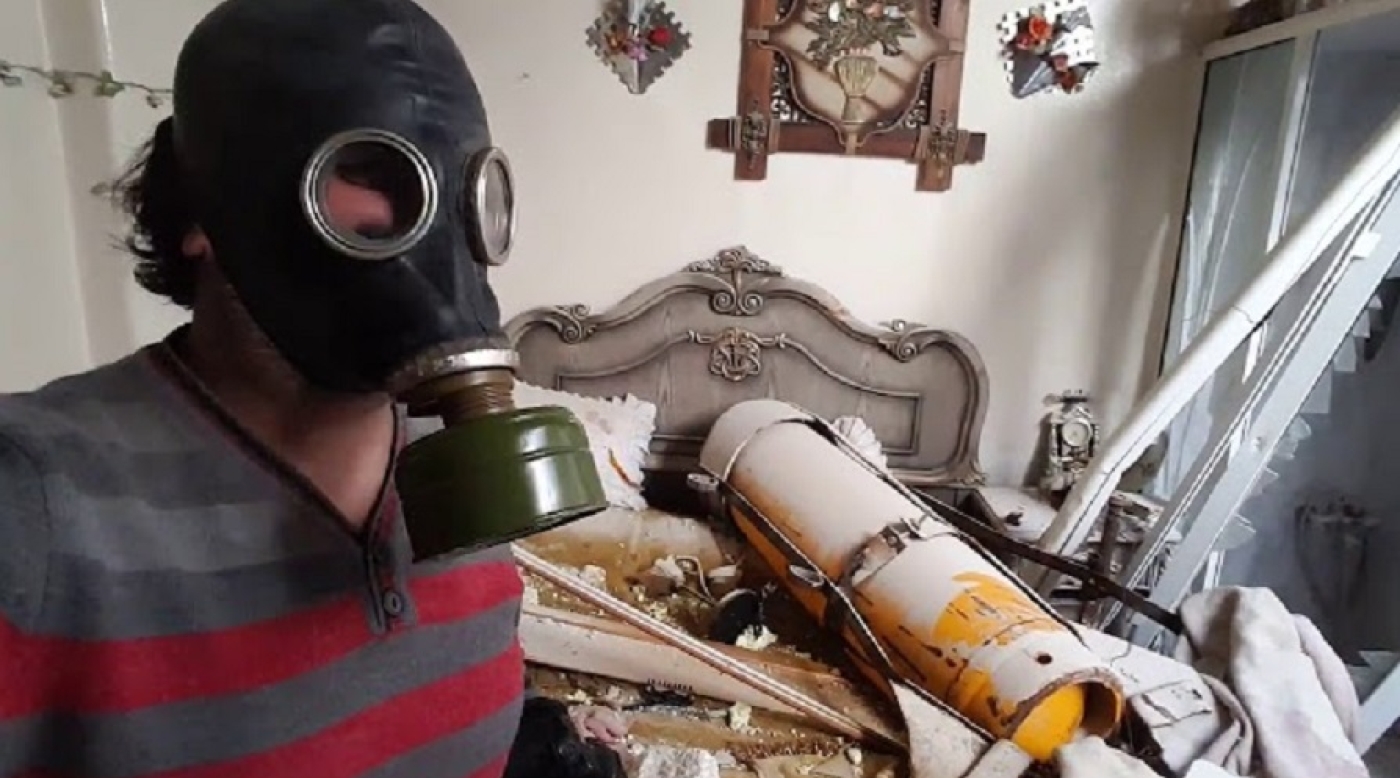 One side has said it is fake news by western "agents", the other calls it a barbaric act by the Syrian government of Bashar al-Assad.

The alleged chemical weapons attack on Douma in the Damascus suburbs last week has sparked the possibilty of a confrontation between world powers.

The Russian government has said there never was an attack, that it was faked by rebel sympathisers, and that its investigators found no trace of chemical agents.

The US and its allies, the UK and France, have said they believe it is the latest in a series of gassings ordered by the Assad government.

France's president, Emmanuel Macron, claims to have definitive proof of the instigator, but hasn't elaborated further.

Middle East Eye looks at what is known about the attacks on Douma, what both sides have said to back up conflicting accounts, and what investigators have managed to separately piece together.

Last Saturday, at least 70 people died after suspected chemical attacks on the city in Eastern Ghouta on the outskirts of Damascus which has been besieged since 2012.

According to a report from the Syrian Network for Human Rights, one attack occurred around 4pm at the Sada bakery, killing 15 people. A second attack at 7.30pm near al-Shuhada square killed 55 people and injured 860.

Five hundred people went to Syrian health facilities over the weekend exhibiting "signs and symptoms consistent with exposure to toxic chemicals", according to the World Health Organisation.

The attacks came as negotiations were under way between Jaish al-Islam and the Syrian government over the last rebel-held bastion near the capital.

On 2 April, 4,000 fighters, family members and civilians had already left the city.

Hours after the 7 April attack, the remaining rebels had agreed to either lay down their arms or leave the city, according to Staffan de Mistura, UN envoy to Syria.

Using information available through open sources, the Bellingcat website has concluded that the latter attack near the square was "most likely" the result of chlorine gas dropped by the Syrian air force from a helicopter.

In a report on Wednesday, the website said it could identify 34 people killed in the attack in the photos and videos of the aftermath.

The report also notes that two yellow cylinders, the same type which have been found after other alleged aerial chlorine attacks during the war, were discovered in Douma, including one found on the rooftop of a building where people were killed.

"Chlorine is far more effective in a confined space and that's what seems to have happened in Douma," said Kaszeta.

"Some people say Sarin, but I've seen very little useful evidence on that front, and nobody seems to be able to say what delivery device would have been used... it's not a gas, so you don't put it in gas cylinders as you would chlorine."

The Syrian government has invited inspectors from the Organisation for the Prohibition of Chemical Weapons (OPCW) in the wake of the attack, but it is not clear whether they will be given access to Douma.

It is also unclear how any apparent military action will impact their investigation.

Russian officials have said their military chemists who visited Douma on Sunday were unable to find any trace of chemical weapons used against civilians.

"The Russian military reached out to local medical officials and was told that no patients with symptoms of chemical poisoning had been admitted to the Douma hospital," Russian-state broadcaster RT reported on Thursday.

Instead, Moscow says the White Helmets – a rescue organisation that they have accused of being backed by Western intelligence - faked the attack so that the Syrian government could be blamed.

"On 7 April, probably the last attempt to stage a chemical weapons attack in Eastern Ghouta was made," Lieutenant General Viktor Poznikhir was quoted as saying in the state-run TASS news agency this week.

"The notorious White Helmets, who operate as part of terrorist groups, staged and filmed a chemical weapons attack on civilians in the town of Douma."

Russia's foreign ministry also released a statement claiming that information being released about the attack is being used to "shield the terrorists and the implacable radical opposition who reject a political settlement".

The Syrian government has denied any involvement in the attack and said the attacks were faked.

Hussam Edin Aala, Syria's ambassador to the UN, rejected the WHO's statement about the 500 injured Syrians as "baseless allegations" and questioned the credibility of the UN health agency which has not been given access to Douma. He said the incident had been "staged".

Such allegations ... signal a new conspiracy against the Syrian government

After inviting investigators to the country this week, state-run SANA quoted a foreign ministry official saying: "Syria is keen on cooperating with the OPCW to uncover the truth behind the allegations that some western sides have been advertising to justify their aggressive intentions."

An Iranian foreign ministry statement on Monday said: "Such allegations and accusations by the Americans and certain Western countries signal a new conspiracy against the Syrian government and people, and a pretext for military action."

What the US says happened

On Sunday morning within hours of the attacks, US President Donald Trump put the blame squarely on Russia and Iran for supporting "Animal Assad".

"If they are innocent, why aren't they allowing people to go in and prove – because you know they are claiming they didn't make the attack," he added.

By Monday, the US State Department said that the symptoms of the victims – based on accounts from medical professionals and social media photos and videos - were consistent with an asphyxiation or nerve agent "of some type" – but didn't name a chemical.

In testimony before Congress on Thursday, Defense Secretary James Mattis said the US was still "looking for the actual evidence".

The use of chlorine in Syria, unlike Sarin and other deadlier agents, has not been a clear red line for the US government, as a Washington Post analysis earlier this year pointed out.

"Even though officials have been loath to admit it," Tobias Schneider, an independent analyst told the Post, "the prohibition against chemical weapons use in Syria has in the past been understood to only pertain to highly lethal nerve agents such as sarin but not the easily produced and far less deadly chlorine."