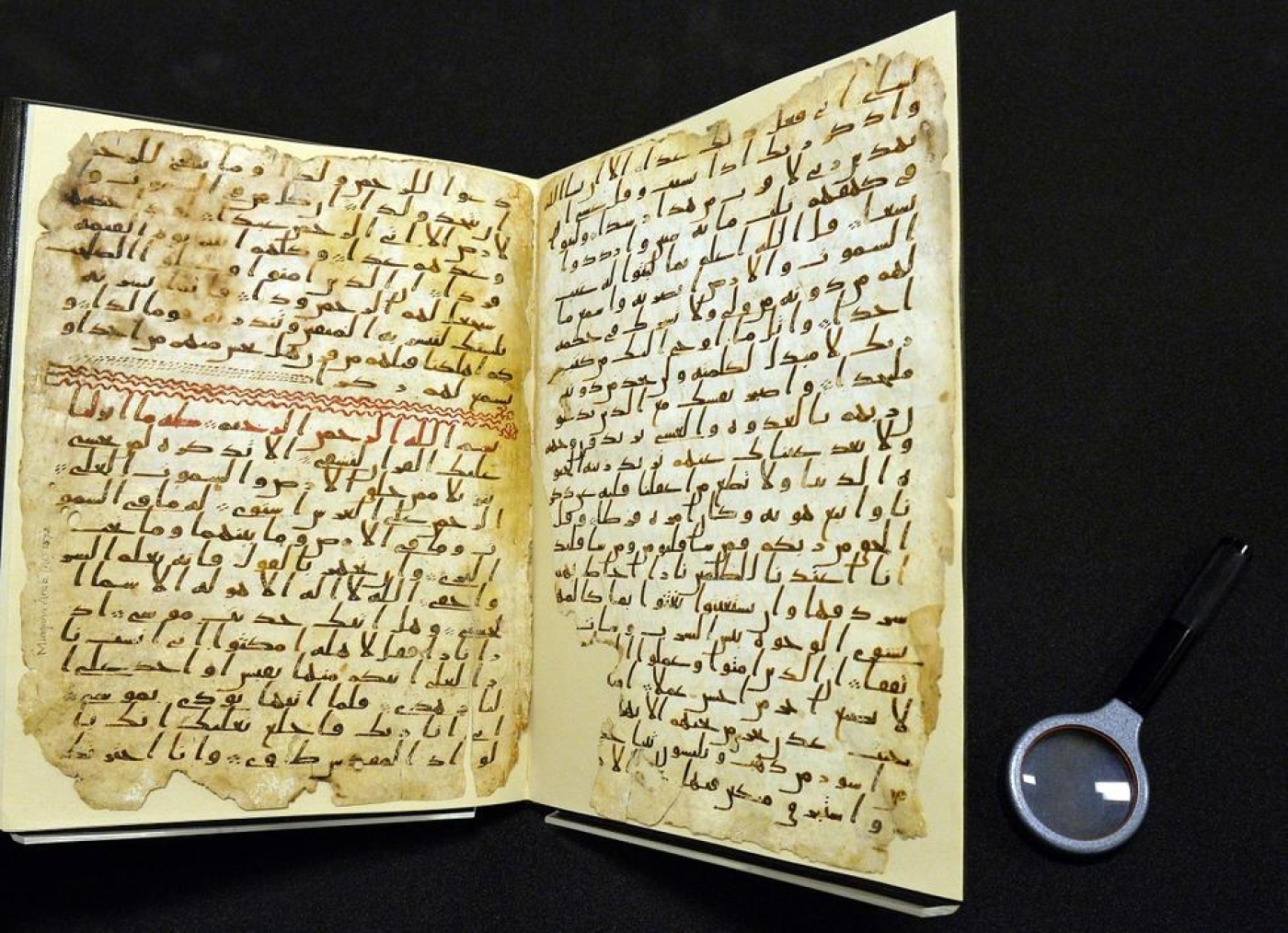 A conservator from the University of Birmingham holds a Koran manuscript in Birmingham, England on 22 July 2015 (AFP)
By
MEE staff

The University of Birmingham has made a startling revelation that has been right under its nose for almost a century. The oldest version of the Koran has been sitting in the university’s library, bound within another similar version of the manuscript from a later date.

The discovery was made by a doctoral and research student at the same university in the Cadbury Research Library. Alba Fedeli was studying the Koranic manuscript when she noticed that two pages - despite the strong similarity in their calligraphy - were apparently erroneously bound with the rest.

The pages, written on parchment made from sheep or goat skin, were then sent by the university for radiocarbon testing. The university wasn’t sure what to expect but the results stunned the researchers.

“We knew it was going to be a good date, but when we actually got the dates it was just an ‘oh my goodness’ moment,” said Susan Worrall, the director of the special collections of the library. “You don’t get many days like that in a career.”

The pages found in Birmingham University are believed to be among the earliest Koranic writings available. One of the pages could even have been written during the Prophet Muhammad’s lifetime, which most scholars agree would have been extremely rare, since in the period of Muhammad's life it is believed his thoughts and teachings were passed on orally.

Muslims believe that the Koran was revealed to the Prophet Muhammad throughout his life, which spanned from his birth in 570 AD to his death in 632.

Segments of the Koran were written down in a variety of different forms – from stone tablets to animal skins – but the prophet's teachings were only gathered together after his death and later compiled and published under the third caliph Othman bin Affan who died in 656 AD.

According to David Thomas, a professor of Christianity and Islam at the University of Birmingham, the discovery will help to resolve a dispute between scholars on whether the text was written during or after Muhammad’s lifetime.

The pages are part of a collection of religious and literary texts that were gathered in the 1920s by Alphonse Mingana, an Assyrian Christian theologian and priest who was born in what is now northern Iraq in 1878.

Mingana attended Birmingham’s Woodbrooke Quaker College in 1913 and was later sponsored by a philanthropist to visit the Middle East. It is not known where or how he acquired the Quranic texts.