After writing a poem attacking preachers calling on Muslims in Europe to take up arms in the Middle East, Sana al-Yemen found herself at the centre of a media frenzy 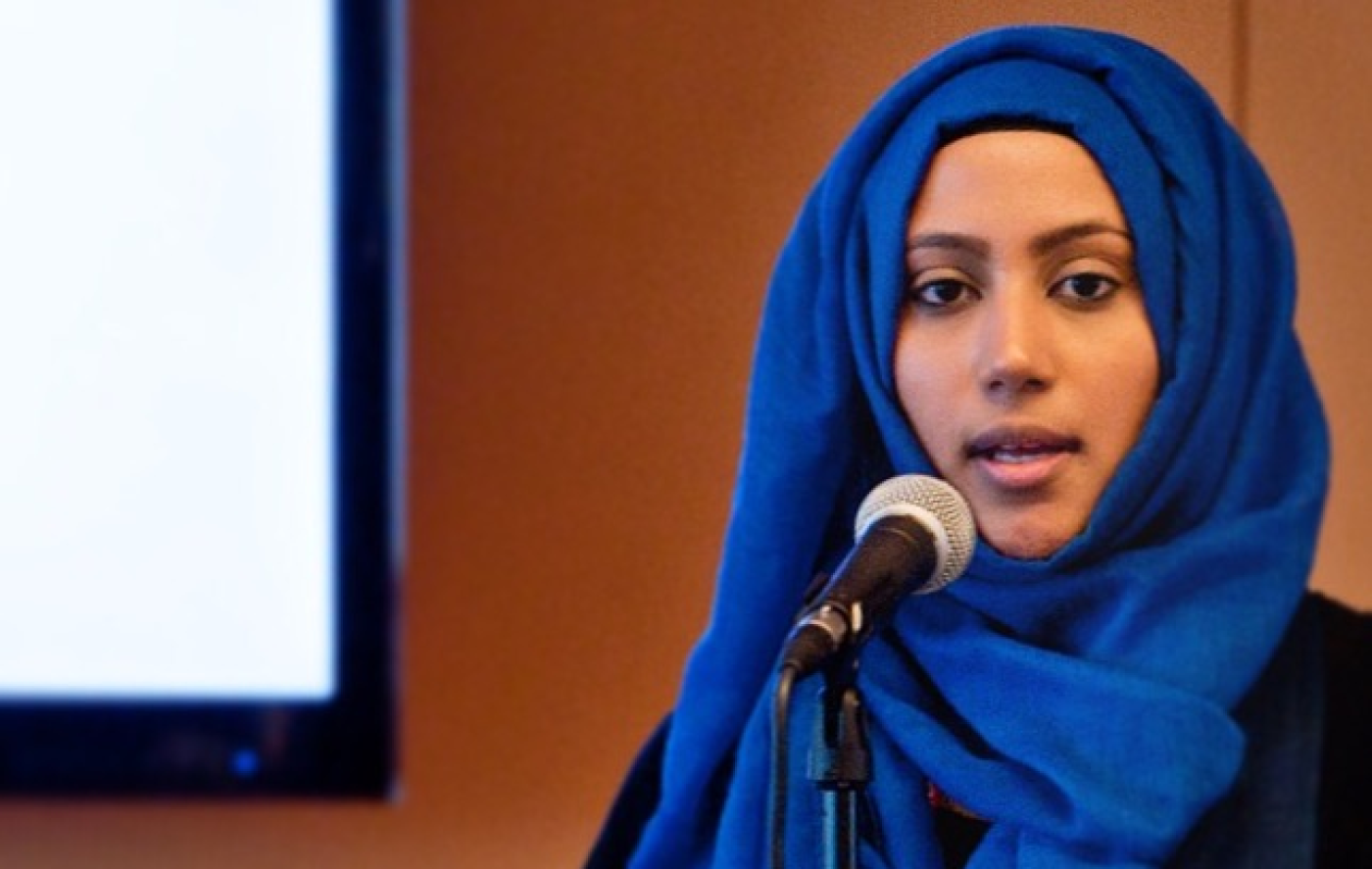 23-year-old Sana al-Yemen recites a poem at anti-war conference in London, May 2009 (MEE)
By
Tom Finn

Hours after Sana al-Yemen posted a video of herself last month reciting a poem about the Islamic State (IS) on YouTube her phone started to ring.

A producer at Al-Jazeera news channel who had seen the clip wanted to interview her. Minutes later CNN called, then the BBC. Sana’s poem, a blistering attack on the militant group that has overrun large parts of Syria and Iraq, had gone viral.

“It just exploded. Hundreds of strangers started messaging me saying how much they appreciated the poem… I got a message of support from a soldier in the US army. It’s been crazy,” said Sana.

While the Islamic State has stirred fear – at times hysteria – amongst people in the West and the Middle East, the militant group’s rise to prominence has also prompted a cultural backlash.

Sana, a 23-year-old journalism graduate who was born in Yemen and raised in west London, wrote her first poem about the Islamic State last year after a friend sent her an IS propaganda video showing young British recruits bombing tanks and carrying out drive-by shootings in northern Iraq.

“There are plenty of people my age, from my area in fact, who have left and gone to Syria,” Sana explained on a recent afternoon in a juice bar near London’s Oxford Street.

“People are obsessed with knowing who these men are and what went wrong in their lives. But for me it comes down to who it is they’re listening to. Who are the religious figures giving them that push to leave their lives here in Britain?”

In a video of her poem This is not my Islam: a message to ISIS, Sana appears in a dimly lit room. Dressed in jeans and a purple headscarf, a shadow across her face, she denounces what she calls “layman preachers,” clerics who cite religion to encourage Muslims in Europe to take up arms in the Middle East.

“My crusade is against those who manipulate the message. Split my people in half and misguide the masses,” she recites, staring at the camera as images of young men with beards – IS recruits in Syria – and radical Saudi clerics delivering angry sermons flash across the screen.

Sipping at a banana smoothie, Sana smiles and glances at her phone. She speaks in the same careful way she recites her poetry; pausing for thought, then unleashing words in rapid fire.

“I wanted to get this message across to preachers… to tell them that, despite their religious education, playing with people’s emotions - dashing in a verse from the Quran – it’s manipulative and unethical. It’s not religious guidance, it’s a way of getting what you want politically.”

“I’m wary of religious sheikhs who are involved in politics, because of who they are aligned with. They have relationships with politicians.”

Sana moved to the UK in 1991 with her father, an architect who worked under the British in occupied south Yemen.

She grew up on a housing estate in West London. Her life, she says, was rooted in “British society but infused with Arab culture”. As a teenager she was an introvert. She stayed at home on the weekends and wrote poetry in a book she kept under her bed, “mainly about life and friendship… If I got depressed, it was my line of expression,” she said.

She admired American rapper Eminem. “I like how he plays with words and their properties, splitting language into musical bits. He has flow.”

In 2010 Sana started sharing online the poems she’d written about women’s rights, US drone strikes, the Israel/Palestine conflict and the rise of the right in British politics.

In one poem, Mr BNP, she challenges the anti-immigration policies of the far-right British National Party: “I tell you what, I’ll wear my hijab, I’ll risk it, because regardless I’m more British than your tea and biscuit.”

Later she released “My name is not Irak” which laments the destruction inflicted on Iraq after the 2003 US/UK invasion and mocks the American pronunciation “I-rak” (“The difference is one is an American fake, and the other is Arab, genuine and great”).

When uprisings broke out across the Arab world in 2011, Sana and a group of “politically minded young Arabs” began organising rallies outside Arab embassies in London in solidarity with protesters in the Middle East.

“It was a shock… we’d been constricted for so long as a people. Seeing women on the frontlines in Yemen, as a poet it fired me up. I wanted to write more…spread the message,” she said.

In 2012, as many of the Arab uprisings descended into civil war and sectarian strife, Sana’s revolutionary crowd started to splinter.

“It got complicated, suddenly there were all these divisions and difference of opinions between us,” she said.

“Some were pro Egypt’s revolutionary, but anti-Syrian. When the Arab Spring got really complicated people didn’t want to be involved anymore.”

Her poem about Islamic State has not been without criticism. IS sympathisers on Twitter, who Sana refers to as "trolls", have called her poem misguided.

Others, pointing out that only Sunni and not Shia preachers feature in her video, accused her of being sectarian.

Sheikh Mohamed al-Areifi, a Salafist cleric from Saudi Arabia who has been accused of encouraging young British Muslims to head to Syria and Iraq, appears three times in the clip.

With over 9 million followers, al-Areifi is the most followed individual on Twitter in the Middle East. He has said a huge conflict in Syria “will herald the end of the world”.

“I understand that al-Areifi has respect within the Muslim community around the world but he was one of the most vocal in trying to engage the youth and encouraging them to leave their homes and go to Syria,” said Sana.

“The fact that he was inciting our youth, to go out there to Syria while his own kids were in his home, is something that annoyed me a lot.”

Sana finishes her smoothie. Her thumb pauses above her phone, before flicking downwards as she hunts for a message in her inbox.

“Here it is,” she reads it out. “Thank you. It’s good to see a strong Muslim woman on camera."

Asked if she feels there are stereotypes about Muslim women in the UK she says: “Definitely, the only thing you hear about is how oppressed we are; I’m definitely not oppressed,” she says laughing. “Neither are my family members. I’m glad I’m breaking the stereotypes.