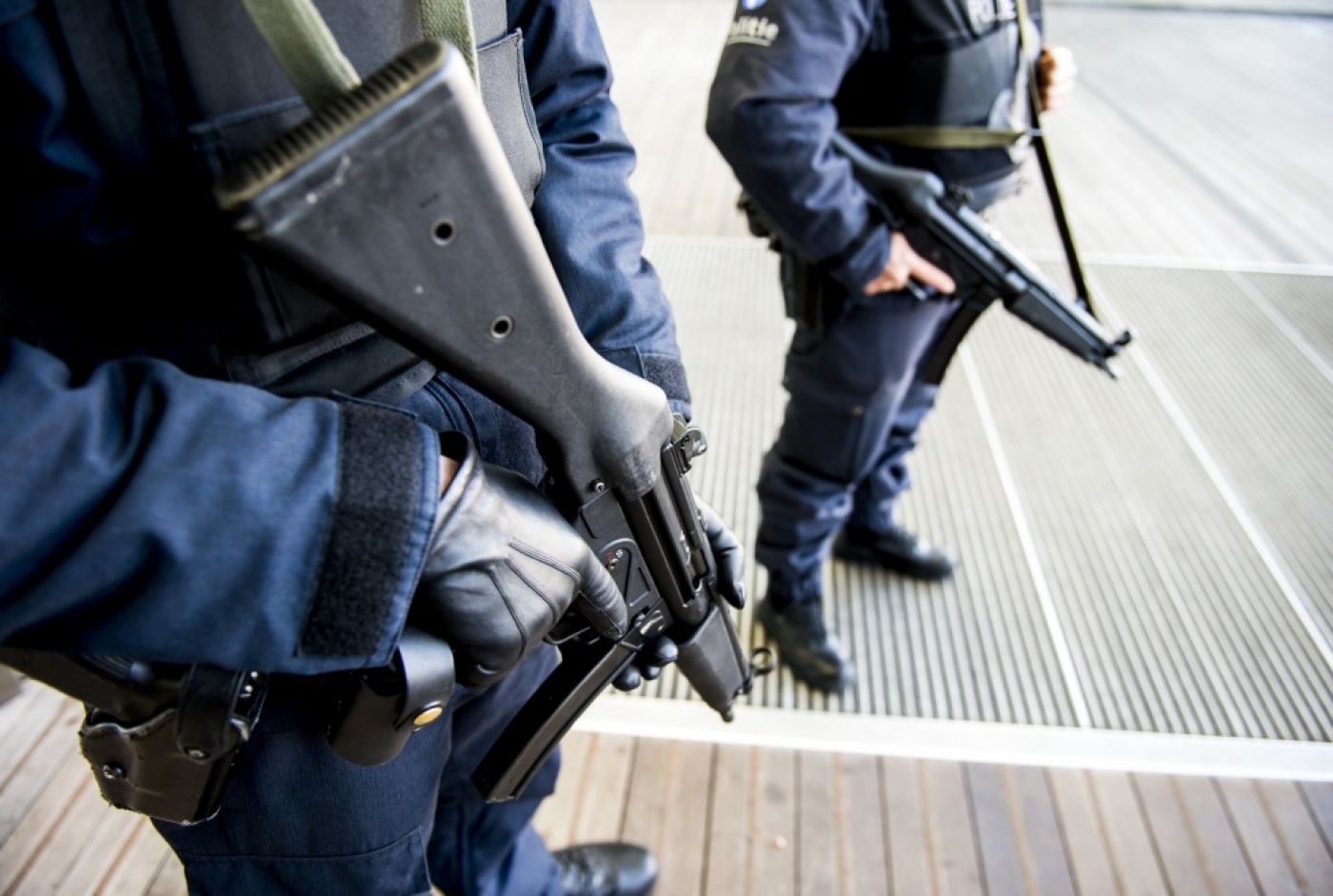 Policemen patrol near the courthouse on Bolivar Square in Antwerp, the day after an anti-terrorist operation (AFP)
By
MEE staff

With as many as 5,000 EU nationals currently fighting in Syria and Iraq, and many likely to return, it will be impossible to discover all potential attack plots, Europe's top police officer said on Saturday.

"Stopping everything is very difficult, containing the threat fully is very difficult, but I'm sure we will prevail as we have prevailed against other forms of terrorism in the past," Europol director Rob Wainwright told Sky News.

Wainwright's comments come a day after two dozen suspects were arrested in a Europe-wide sweep of alleged terror cells, a day after two Belgians whom authorities said were planning an imminent attack on a police station were killed in the town of Verviers during a police operation.

Belgian officials said the men had recently returned from Syria, where hundreds of Belgium citizens are thought to be currently fighting, and were within hours of conducting their planned attack.

On Saturday, five people in Belgium who were among 13 suspects arrested in the country's raids on Friday were charged with "participating in the activities of a terrorist group".

UK police on Saturday have also been put on high alert, with police taking extra precautions in light of alleged plots to kill police officers and bomb police stations in Europe.

“We are also considering what further measures we might put in place to enhance the security of police officers, given some of the deliberate targeting of the police we have seen in a number of countries across Europe and the world,” said Assistant Commissioner Mark Rowley.

“Chief constables across the country are reviewing how to strengthen the protection of their officers from such attacks," he said.

UK Prime Minister David Cameron announced the new measures, which also include increased security at Jewish schools around the UK, on Friday while in Washington, where he was discussing the threat of terror attacks with US President Barack Obama.

“The government has a very strong relationship with the Jewish community; it talks to them regularly about these issues,” said the prime minister. “We have to be incredibly vigilant and look at all of these risks, particularly risks to police officers themselves, and take every action that we can.”

Some activists have criticised the heightened security measures in the wake of the Paris killings.

“The fact is that the government wants to push through new laws that are even more draconian than the ones we have, that even at the height of the IRA campaign we never saw – we’re seeing now that the government wants to take away people's passports, to strip people of their nationality and make them stateless and to enforce internal exile in the UK,” said Moazzam Begg, a former Guantanamo Bay detainee and campaigner.

“It sounds like something out of the Stasi in Eastern Germany at the height of the Cold War, but it’s in Britain today in 2015," he told MEE.

The Belgium government on Friday also announced a series of new measures to strengthen its anti-terror legislation, including making travelling abroad to Syria punishable by law and allowing for the army to be called in for incidents where the risk is high enough.

The killing of 12 people at the offices of the satirical magazine Charlie Hebdo and the murders of four people at a kosher supermarket in Paris last week have heightened fears in Europe about the existence of a network of Islamic militant terror cells.

No links have been found between the raids in Belgium and the culprits of the Hebdo killings, and Belgian officials have said their investigation began before the attacks at the magazine.

Belgian federal prosecutor Eric Van der Sypt said it is hard to identify plans because suspects tended to be "working in a self-radicalised way very often, not necessarily under any command and control structure".

Wainwright, the Europol chief, underscored the complexity of tracking down potential attackers on Saturday saying militants no longer have coherent or identifiable hierarchies.