East Libyan forces carried out air strikes around major oil ports overnight as they sought to regain control of the area from a rival faction, a military spokesman said on Saturday.

The assault raised the prospect of a new escalation of violence around the ports, and put at risk a sharp boost to Libya's oil production achieved after the LNA took over four ports in September, ending a blockade at three of them.

Though Es Sider and Ras Lanuf have been reopened for exports, they were badly damaged in past fighting and are operating well below capacity.

It was not clear to what extent the Benghazi militants had gained control over the ports, or whether operations at the terminals had been affected.

The National Oil Corporation in Tripoli said it held an urgent meeting on Friday to look at ways to protect oil facilities in the area and to review current loading schedules.

Mismari earlier conceded his forces had been overrun at the main airfield in the oil port of Ras Lanuf by the Benghazi Defence Brigades.

An array of forces, most of them loyal to the UN-backed government in Tripoli, have been involved in efforts to oust Haftar from the oil ports, whose seizure enabled him to pose a major challenge to its authority.

But the Tripoli government on Friday evening denied any involvement in the renewed offensive on the oil ports, condemning it as a "military escalation".

The forces involved in the latest assault are a mixture of Islamist militias, eastern tribes opposed to Haftar and members of the Petroleum Facilities Guard which controlled the ports before Haftar's takeover.

"The attackers were armed with modern tanks and a radar to neutralise our air force," Mismari said.

"But the battle is ongoing. The situation in the Oil Crescent remains under control."

There are four ports along the Oil Crescent on the eastern part of the Gulf of Sirte which account for the lion's share of Libya's oil exports.

Haftar's forces seized Zueitina, Brega, Ras Lanuf and al-Sidra in a lightning offensive last September that dealt a major blow to the UN-backed Government of National Accord.

Haftar dominates a rival administration based in the east that continues to defy the GNA's authority.

He has backing from neighbouring Egypt, from the United Arab Emirates and increasingly from Russia.

Russia has been trying to broker talks in Egypt between Haftar and the GNA that would see it reformed with a major role for the strongman but so far they have not borne fruit.

Exports from the eastern oil terminals are Libya's main source of hard currency and so control over them has been bitterly contested.

In December, the Benghazi Defence Brigades carried out a similar attack on the Oil Crescent, but were repelled by Haftar's forces.

And in January, powerful militias from the western city of Misrata joined another such attack.

Rocked by chaos since the overthrow and killing of Muammar Gaddafi in 2011, Libya desperately needs to relaunch its oil exports, the backbone of its economy.

The GNA has struggled to impose its authority as it faces a multitude of battle-hardened fighters who took part in the uprising that ousted Gaddafi. 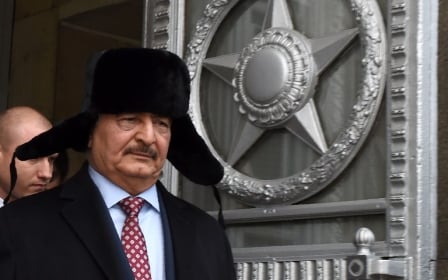