Turkish authorities released the editor-in-chief of a state-owned Russian news agency on Sunday after arresting him earlier in the day, as tensions persist between Ankara and Moscow.

Mahir Boztepe and three other journalists from Sputnik News Turkey were arrested over the weekend, days after the agency published an article questioning Turkish sovereignty over the southern province of Hatay, which borders Syria and has been claimed by Damascus.

The event which according to Russian media began on Saturday, when an angry mob tried to break into the apartments of three Sputnik staffers in the Turkish capital Ankara, was swiftly brought to a close on Sunday, only after the intervention of Russian Foreign Minister Sergey Lavrov.

According to Sputnik, the three were detained following the Saturday evening attacks, in which the attackers threatened violence and accused them of being “Russian spies”.

Things escalated on Sunday morning when the Russian foreign ministry called on Turkish authorities to release the journalists.

“The attacks on employees of the Turkish bureau of Sputnik and their detentions is a gross violation of the rights of journalists,” the Russia foreign ministry said in a statement.

The Ankara public prosecutor's office launched an investigation into Boztepe on suspicion of "degrading the Turkish people, the Turkish state, state institutions" and "disrupting the unity and territorial integrity of the state", state news agency Anadolu reported.

In a tweet, Reporters Without Border urged Turkish authorities to release seven recently detained journalists, including Sputnik employees, adding that “journalists can’t be seen as responsible for the regional crisis."

#Turkey: 4 journalists from @RudawTurkce & @MAturkce arrested in #Edirne when covering refugees crisis in #Pazarkule and 3 @sputnik_TR reporters arrested in #Ankara for a story on #Antioch. @RSF_tr : Journalists can’t be seen as responsible of this regional crise. #FreeThemAll! pic.twitter.com/gld2PwkUbu

By early afternoon, following a phone call between Lavrov and his Turkish counterpart Mevlut Cavusoglu, all the Sputnik employees were released.

According to the Russian foreign ministry, "the Russian side emphasised the necessity for a speedy resolution of the situation.”

The arrests comes as Turkey - which backs Syria’s rebels - tries to repel a major assault launched by the Syrian government and Moscow to capture the last rebel stronghold in Syria’s northwest.

After tensions escalated in the past week, when 33 Turkish soldiers were killed by the Syrian government in air strikes, Turkey has vowed to open its border for thousands of refugees to stream into the European Union and has asked Moscow to step aside to let it deal with Assad’s forces.

The arrests followed a report carried in Sputnik's English-language website, a separate entity to the Turkish-language website the journalists work for, questioning the legitimacy of a 1939 referendum that ceded Hatay province to Turkey.

Syria has claimed the territory was separated from it against the terms of the French Mandate for Syria, which came into place following its independence from the Turkish Ottoman Empire and has never formally renounced its claim. Syria War
Idlib offensive: Turkey's tradeoffs with Russia put it on the losing side
Christopher Phillips 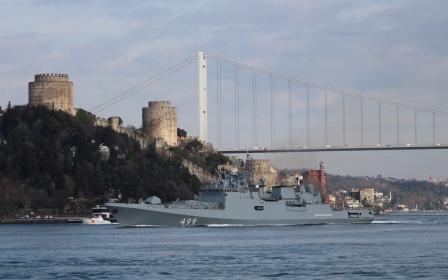