An Egyptian court has sentenced 13 journalists to life imprisonment, and another journalist to death.

The 14 journalists are part of the what is known in the local media as the “Rabaa task force case.” They are accused of being involved in an operations room that targeted the state after Egyptian security forces dispersed the Rabaa al-Adawiya Square sit-in in August 2013, and of spreading chaos in the country.

The sit-in was a series of mass protests that lasted for over a month following the ousting of former president Mohamed Morsi by popular protests backed by the military. Human Rights Watch said that at least 1,000 people were killed in the square by security forces who “gunned down hundreds of unarmed protesters”.

The Rabaa task force includes dozens of people who were present at the protests that took a violent turn, as security forces descended on the square in full force.

On 11 April, the court upheld the death sentences for 14 people within the task force, including Muslim Brotherhood leader Mohamed Badie and preacher Salah Soltan. The remaining 37, including the 13 journalists, received life sentences.

The judge presiding over the trial, Mohammed Naji Shehata, is notorious for handing out mass death sentences and severe punishments and has been criticised by various local and international human rights groups.

Walid Abdel Raouf Shalaby, a journalist with the Muslim Brotherhood’s political branch the Freedom and Justice Party, was sentenced to death. The party was legally dissolved in August 2014, after the Muslim Brotherhood was declared a terrorist group by Egyptian authorities in December 2013.

All of the journalists have been held in Tora jail in Cairo since their arrests following the protests in the summer of 2013.

Head of Cairo’s Syndicate for Journalists Yehia Qalash said they will form a legal committee to study the cases of the sentenced 14 and may undertake possible legal steps.

Speaking to Egyptian daily al-Masry al-Youm, Qalash said that the syndicate is following up on the conditions of the imprisoned journalists. He stressed that as part of the syndicate’s mission to defend freedoms, they will do their best to secure the release of the journalists. Qalash has also met with the families of the 14 to discuss the syndicate’s plan to take up their case.

Khaled al-Balshy, the head of the syndicate’s Freedoms Committee, said that the syndicate will defend all journalists, whether or not they are members of the union.

“The Committee emphasises that the sentences imposed on colleagues and the conditions of prisoners and detainees will be at the top of its agenda during its first meeting next Tuesday,” Balshy said in a statement on Facebook.

The syndicate has demanded the transfer of a number of these journalists to more appropriate prisons, and called for an urgent surgery operation for Hany Salah Eddin, a journalist with Youm7, another Egyptian daily.

The sentenced journalists, who are accused by Egyptian authorities of working for mostly pro-Muslim Brotherhood outlets, include the four founders of Rassd News Network, the editor in chief of Ikhwan Web, Khaled Mohamed, and a correspondent for the Amgad satellite channel.

Egypt is ranked as number six for being the worst jailer of journalists worldwide, according to the Committee to Protect Journalists. 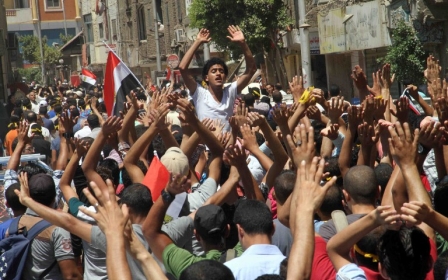