CAIRO-Journalists in Egypt have, for decades, been wrestling with the country’s Interior Ministry over press freedoms and the repeated detention of reporters.

This week, though, tensions escalated when Al-Masry Al-Youm, a privately-owned daily newspaper, published a seven-page investigative report on alleged police brutality since 2012.

Hours after the story went to print, the Interior Ministry condemned the newspaper in a statement announced on national television, and vowed to take a legal action against both the chief editor and the four journalists who wrote it.

The Interior Ministry claimed that Al-Masry Al-Youm published the article because of a complaint it had filed against the newspaper in December 2014 which accused the paper of ‘circulating false news’ and ‘stirring up’ public opinion.

Yousry Al-Badry, the lead journalist who worked on the article, and his colleagues have not been informed of the charges being levied against them.

“Our report cites documented facts and publically available figure… nothing was fabricated,” he said.

“I will leave the reader to judge whether we crossed the line or not,” Al-Badry added.

The fact that the journalists are being interrogated before the Supreme State Security Prosecution, a legal body which usually only investigates charges such as espionage and terrorism, marks a serious move, Egyptian lawyers have warned.

Lawyer Mohsen Al-Bahnasy said that the charges will likely have to do with ‘inciting public opinion against a sovereign entity’ and ‘disturbing the public peace and security.’

“If this goes ahead our justice system will have been perverted,” he said.

Entitled “The police, their martyrs and sins,” the article documents brutality and violations committed by the police over the past three years as well as narrating the stories of policemen who lost their lives in the line of duty.

“Citizens cried over the police who were martyred as they were facing terrorism and trying to restore security; yet many are worried that some officers are going back to their old habit of arrogance… breaking the law and practicing acts of torture and oppression inside police stations and prisons…” the report reads.

The article accuses the Interior Ministry of lacking a clear vision in the training and development of its personnel.

“The abuses Al-Masry Al-Youm documented cannot be described as being individual for they echo…a culture of…mismanagement,” it read.

Egypt's press syndicate was quick to respond, rejecting in a statement what it called attempts to "intimidate" journalists.

“Instead of maintaining its right to respond [to the allegations in the report], an act that [could have showed] respect for the freedom of expression, the ministry depended in its claims on a previous complaint against the newspaper in a bid to make the [report] look ‘malicious’,”  statement read.

“The aim behind prosecuting the journalists is to force them to stop criticising the ministry and writing such reports,” press syndicate president Yahia Qalash told Middle East Eye.

The Interior Ministry had previously forbidden Al-Masry Al-Youm from covering news in the country altogether, which according to Qalash, violates both the constitution and the readers’ freedom of information.

“The ministry should have investigated the information mentioned in the report and addressed the public opinion rather than condemning it and filing a complaint against the colleagues,” Qalash said.

“There is no democratic community in the world that does not respect the freedom of the press,” he added.

The alleged malpractices of the police were one of the main triggers of the January 25 uprising in 2011 that led to the ouster of President Hosni Mubarak.

Among the abuses highlighted in the report are those of a lawyer tortured to death by two national security officers at a police station and a female university student kidnapped and raped by two low-ranking police officers inside a police truck.

Other incidents include the death of a police conscript after being beaten up by an officer and the killing of leftist activist Shaimaa Al-Sabbagh by a police officer during a peaceful protest commemorating those killed during the 2011 uprising.

“There is nothing personal about it…We as journalists criticize the negative aspects related to the ministry so that we help correct them,” Qalash said.

Based on the report, policemen from different ranks have so far received 31 verdicts during the past three years over diverse charges while 39 other cases are still under investigation.

The report further slammed the interior ministry for offering jailed policemen special treatment inside prisons where they serve their terms.

The Egyptian journalists’ fight against imprisonment for publishing crimes goes as far back as the 1990s. Before the January 25 uprising, dozens were jailed and papers were shut down for criticising Mubarak, his family, the government or the ruling party.

In 2013, former interim president Adly Mansour vowed to call off the jailing of journalists; but his promise was never enacted.

Following the uprising and the June 30 coup in 2013 that toppled the government of Islamist president Mohamed Morsi, violations against journalists increased and many were subject to killing, assault, detention and imprisonment.

Most recently, a reporter from independent Al-Dostour newspaper is facing the same fate as the Al-Masry Al-Youm journalists after his newspaper published a series of investigative reports on alleged police infringements.

“The current regime [of president Abdel-Fatah El-Sisi] made it clear from the start that it has zero tolerance for critics and dissenters; and the jailing of journalists sent a chilling message to that effect,” independent journalist Shahira Amin said.

Amin, also a prominent TV host, believes that the current media climate is restrictive as “journalists are unable to do what they are supposed to do: hold the police to account for their actions.”

The Egyptian law allows journalists’ imprisonment for publishing crimes in cases of slander, public libel, racism, stirring up the public opinion and inciting hatred and violence.

“Egyptians including the police must get equal treatment; and journalists must have the freedom to report any abuse of power,” Amin said.

Former Press syndicate vice president Abeer Saady shares Amin’s view, believing that the reaction of the Interior Ministry “stands for one of the numerous violations against the freedom of press.”

"The media is supposed to be informative and expose violations - not to be punished for performing its role," Saady said. 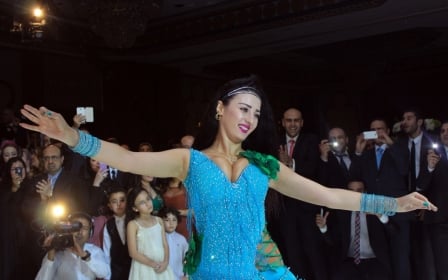