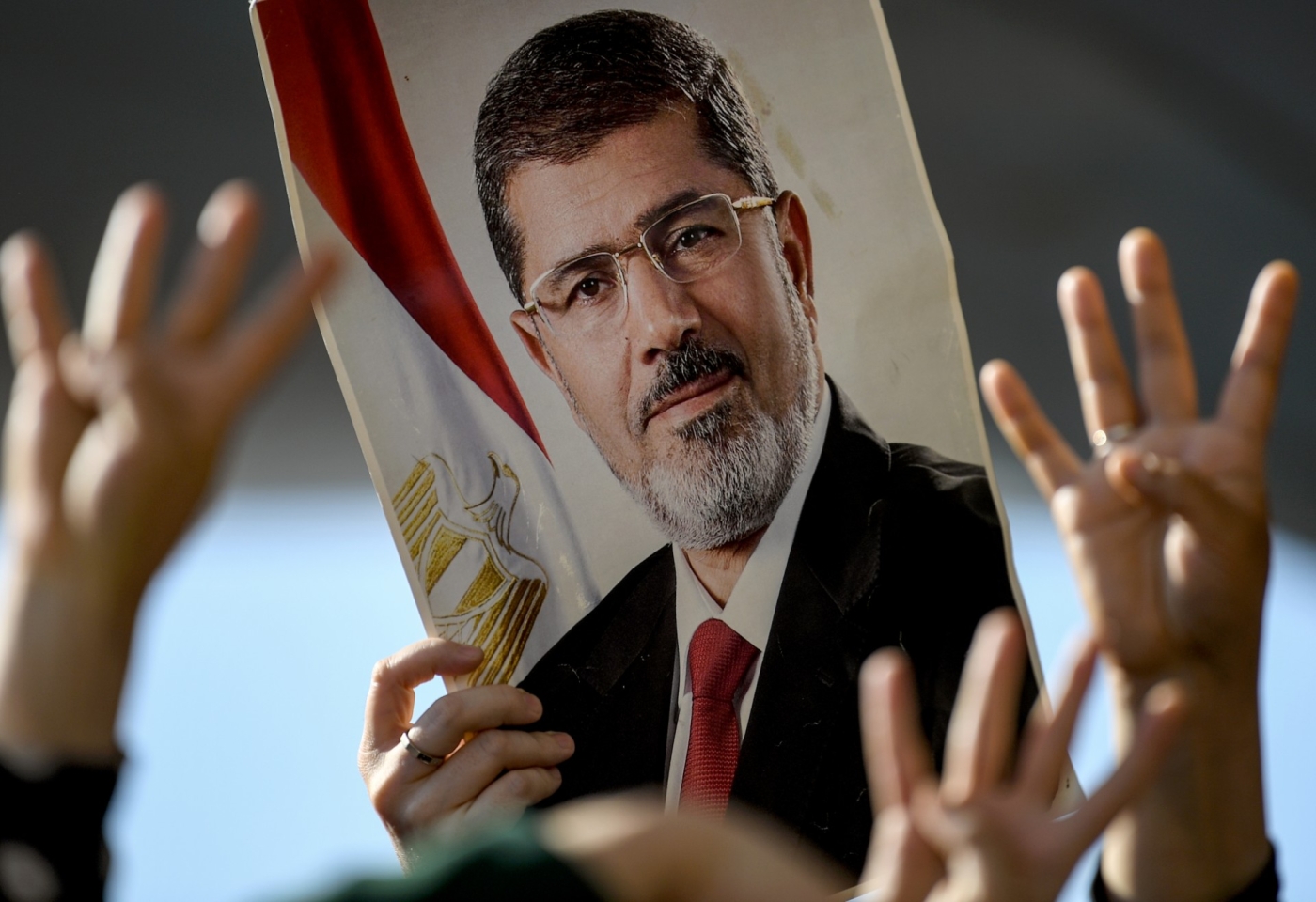 People flash the Rabia sign next to a poster of former Egyptian president Mohamed Morsi during a symbolic funeral ceremony in 2019 at Fatih mosque in Istanbul (AFP)
By
David Hearst
, Mohammad Ayesh

Mohamed Morsi knew from "day one" that he would not be allowed to complete his term as president and the price of being Egypt's first democratically elected leader might be his life, his widow and son have told Middle East Eye.

In their first extensive interview, widow Naglaa Mahmoud and her son Ahmed said Morsi warned his family during his 2012-13 presidency that the West would not allow Islamists to rule in Egypt.

Morsi, the Muslim Brotherhood's candidate, won Egypt's first free presidential election in 2012 following the ousting of longtime autocrat Hosni Mubarak the year before. But powers inside and outside of Egypt were wary of the Brotherhood and political Islam.

'Even though the Islamic project is open, civilised, valuable and stands for peaceful coexistence, he knew that countries in the region would hinder its progress'

"Even though the Islamic project is open, civilised, valuable and stands for peaceful coexistence, he knew that countries in the region would hinder its progress," Mahmoud told MEE in an email exchange.

"And that he might be killed and neither Mubarak's institutions nor the deep state and its corrupted members would accept him. Morsi was honest, and he believed in a free, democratic, civil and Islamist project."

Despite this, Morsi "tried to count on the will of the people and the aspiration of the masses," Mahmoud said.

"As for me, I did not expect that to happen, but I used to believe what he said because the president's predictions were always true. However, I was ready."

Ahmed said the family was convinced his father and elder brother were murdered by the government of Abdel Fattah el-Sisi, Morsi's defence minister, who took power in a 2013 military coup and is now president.

Morsi, along with hundreds of other Muslim Brotherhood members and leaders, was arrested following his removal. Morsi died of a heart attack he suffered during a court session in June 2019. UN experts said the conditions he was held in may amount to a state-sanctioned killing.

Ahmed told MEE his father repeatedly complained about the danger to his life during the trial sessions, but no one responded to his calls and his health deteriorated.

"Definitely his death is not natural, and we called for an investigation that can reveal that. We still affirm that the situation needs transparency and knowledge of the truth," Ahmed wrote.

Ahmed's younger brother Abdullah campaigned for an international investigation into his father's death before he, too, was struck down in mysterious circumstances.

Ahmed said the 25-year-old had no known medical condition before his death, which was ascribed by authorities as a heart attack.

"He was not suffering from any chronic disease. We do not know the real causes for Abdullah's death, but what we know is that his death was mysterious, as he died outside the house after he left the prayer and in his car, and was taken to a hospital far from the place," he said.

Ahmed also emphasised the presence of two strangers at the scene of Abdullah's collapse.

"There was a man and a woman whom Abdullah did not know at the scene of the accident. They took him to the hospital in an excitable and mysterious manner, placing more suspicions, and this is proven even by the security authorities. Abdullah's death was not natural, and it also needs to be investigated."

Yehia Hamed, a former minister under Morsi who is now in exile, said he was in close touch with Abdullah before his death.

"Abdullah died shortly after he privately gave crucial evidence about his father's death to the United Nations," Hamed said in a statement reacting to the UN experts’ report on Morsi's death.

"I was in close contact with Abdullah Morsi and I am convinced that it was his very brave work with the United Nations that led to his death."

Severe restrictions were placed on the burial of both father and son. Funeral ceremonies were banned. The burials of both Morsi and his son took place at night.

"They prevented praying in the mosque, and against the wishes of the president [Morsi] they did not bury him in his hometown. It was the same situation with Abdullah," Ahmed said.

Ahmed's older brother Osama was arrested on 16 December 2016 on charges of planning to organise protests, in what his family's legal team described as trumped up charges. Ahmed said the sole reason for his arrest was that Osama was the president's son and lawyer.

Neither Ahmed not the rest of the Morsi family have been able to visit him. "Visits have been banned for years, and he is living in very harsh conditions."

The legal team representing the Morsi family said Osama was in danger of being poisoned in prison.

Guernica 37 International Justice Chambers said Osama faces "a very credible risk of being poisoned in prison," adding that "he is being subjected to the same dangers to his life as his late father".

On Thursday, the eve of the seventh anniversary of the Rabaa massacre when Egyptian security forces slaughtered at least 1,150 anti-coup protesters, news of the mysterious death in prison of another leading member of the Brotherhood leaked out.

In video testimony from January 2018, Erian told a judge at a courtroom that he had developed hepatitis C while in custody. He said his multiple requests to be transferred to a specialised hospital were denied.

The Morsi family exist in a form of social purgatory. Ahmed said the family was being punished for being related to the deposed president.

"Everything is forbidden for the family, including travel. We are placed on the ban lists only because we are the sons of Morsi, although we did not engage in any political or economic work and we have no party activity and we did not have any jobs in the country," he said.

"But the authorities are taking revenge on us because we are the sons of the first elected civilian president, and we are punished because we are Morsi's sons, which is an honour for us."

Mahmoud, who refused to take the title of first lady of Egypt, said they lived "the simple life" in their rented flat in Cairo's 5th Settlement when her husband was president. Rabaa: The massacre that ended the Arab Spring
Read More »

"The president rejected any presidential privileges, as he wanted us to live at the same level as our fellow citizens.

"We were watching some plotting against him and we witnessed the lies and the defamation campaigns in the media. However, the president's honesty was proven to the whole world against their fallacies," she said.

"We lived a simple life away from the media or the luxury and prestigious ceremonies. The president did not want us to appear in the picture with him, as he tried to establish the image of the president who works as an employee for the people."

Morsi's modesty and devotion to public service contrast with what we now know of the attitude of Sisi and his wife and family.

While there were deadly clashes around the Ittihadiya presidential palace between opponents and supporters of Morsi in December 2012, Sisi and his family were touring their newly built, multi-million-dollar palace in Cairo's Helmeya district, according to Mohamed Ali, a  millionaire contractor turned whistleblower.

When Sisi became defence minister, his wife, Intissar, refused to live in the house where the late Egyptian General Abdelhakim Amer, who led Egypt's army during the 1967 Middle East war, once lived.

"So Sisi ordered it to be demolished and a new house built in its place," Ali said in an interview in October. Every few days, Sisi would come to view the house, including that December evening when the clashes broke out.

'If my blood was the price to maintain legitimacy, then I am ready for this, for the sake of this nation's stability'

"I realised how frivolous he was. The country was on fire, and the people were killing each other in the streets, but he was still very interested in the house and its details, the pool, the rooms in the master suite, and his children's rooms," Ali said.

Mahmoud said Morsi was well aware of the danger posed by his defence minister and opponents, "but did not think about himself even when he was arrested during the 25 January revolution".

"He was steadfast and strong, knowing that the path of struggle necessitates great sacrifices, not a life of luxury and privileged state positions," she said.

"And that he would struggle to reform his homeland, which was controlled by corruption and dictatorship."

A month before the Rabaa massacre, Morsi warned Egypt that he could die to protect the 2011 revolution.

"My life is the price for protecting the legitimacy," he said in a speech on the eve of the coup.

"If my blood was the price to maintain legitimacy, then I am ready for this, for the sake of this nation's stability."