French newspaper La Croix claims its correspondent in Cairo was deported by Egypt's intelligence service, amid crackdown on journalists Egypt has expelled a journalist working for the French daily La Croix “for no reason”, in the latest crackdown on journalists in the country, according to the newspaper's publication editor.

Remy Pigaglio “was returning from holidays in France on Monday when he was detained by airport security,” Guillaume Goubert told the AFP news agency.

“After a night in the cells, he was expelled for no reason, although all his papers were in order,” Goubert added. Pigaglio, who also works for France's RTL radio, was due back in Paris later on Wednesday.

Goubert said airport police confiscated Pigaglio's passport and mobile phone and that it was hours before he was able to contact the French embassy.

“It appears that Egypt's intelligence service was behind the decision to expel” the correspondent, Goubert added.

In a statement published in La Croix, Pigaglio said no one had questioned him and he still did not know why he had been expelled.

He said: "Nothing was confiscated from me and I wasn't treated badly. I was not interrogated, and I never knew, and still do not know, why this decision was made to ban me from entering the territory."

Journalists in Egypt expressed their dismay at the deportation, saying in a note that it was a sign of “the growing repression by authorities of Egyptian and foreign media.”

French journalist @rpigaglio deported from Egypt after working there for two years, with full accreditation pic.twitter.com/awhMJ6pMXH

Egypt is ranked 158 out of 180 countries in the 2015 Press Freedom Index, according to Reporters Without Borders, a freedom of expression advocacy group.

Earlier this month, Egypt's journalism union accused the authorities of declaring war on journalism in the country, denouncing what it said were increasing attacks on domestic journalists and media freedom. Police later raided the union's office for the first time in its history.

In late April, Amnesty International criticised the authorities for a crackdown on activists who had been planning an anti-government protest. Earlier this month, a new draft bill was up in parliament on regulating the media.

Egyptian journalists say it would likely bring the demise of dozens of low-budget, online media outlets serving as refuge for young writers and liberal activists escaping government restrictions on freedom of expression.

Egypt's parliament is also set to approve clauses that would ban all live video transmissions without permits. Insiders expect such permits will be denied to non-state media.

Pigaglio’s expulsion from Egypt comes on the same day that Egyptian President Abdel Fattah al-Sisi met with a delegation from the French National Assembly. The Egyptian president used the visit to praise the pace of improved bilateral relations.

In contrast, Italy has been critical of Egypt after an Italian doctoral student who disappeared on 25 January and was found tortured to death on 3 February, amid accusations that Egypt's security forced were involved.

Italy has withdrawn its ambassador to Cairo over the case of Giulio Regeni, and cooperation on official levels has been stymied during the investigation, with Italian officials saying Cairo has been uncooperative. Egypt denies that its security services were involved in Regeni's killing.

Sisi seized power from the democratically elected Mohamed Morsi in 2013 following popular protests against the Muslim Brotherhood president. But Sisi faces growing discontent over what critics call his heavy-handed rule. 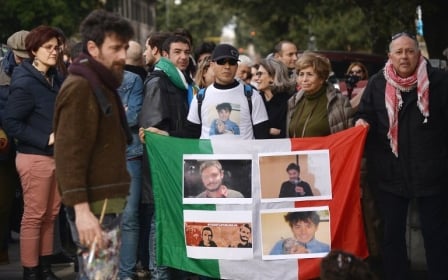