An Egyptian court will hear a case against a television show featuring a puppet that makes sexual innuendos and provides political commentary, local media reported on Sunday.

The Court of Administrative Justice said that on 26 June a case will be heard against the satirical show Abla Fahita, which features a Muppet-style puppet of the same name.

The case against the show has been brought by Egyptian lawyer Samir Sabry, who believes the show, and puppet, “runs contrary to the values and ethics of Egypt”.

It is accused of "violating public morality" and the case will be heard in Cairo by the judge Ahmed al-Shazly.

The lawyer said that he is offended by the puppet’s language, describing it as profane, according to the Egypt Independent newspaper, and adding that he is concerned that the show is “broadcast into every home, where there are families and children present”.

Abla Fahita is a popular show in Egypt, and the puppet’s Twitter account has more than half a million followers.

The character often mocks public figures in Egypt, and has criticised the arrest of opposition figures by the government of President Abdel-Fatteh al-Sisi, saying that “everything has become a taboo in Egypt nowadays and censorship has reached an alarming point”.

The puppet has previously been accused of sending “coded messages” to the banned Muslim Brotherhood group on the television show.

Sabry said public figures in Egypt deserve more respect, and he said the show does not represent a “good example of free speech or creativity”. He said there is a “fine line between moral decadence and freedom of speech and creativity”. 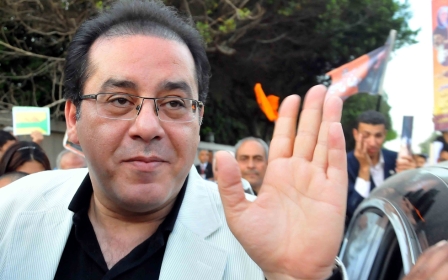