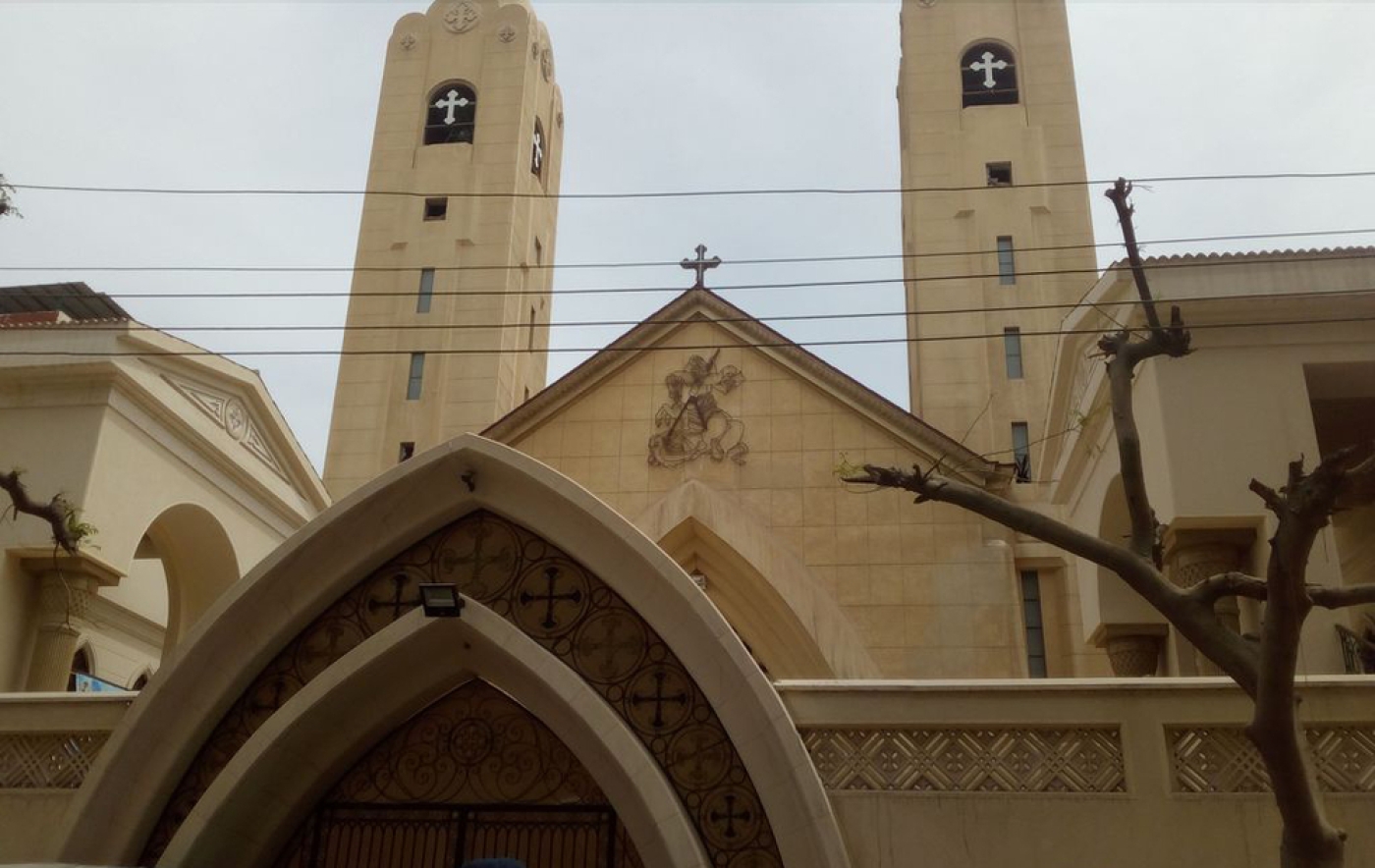 TANTA, Egypt - On Monday morning, the scene of the bomb explosion at St George’s church in Tanta, 90 km north of Cairo, was largely quiet. The streets leading to the church were practically deserted except for a small TV crew stationed across, two Coptic women standing outside the entrance, and a few others hovering around the cordoned off area.

"There is no God. What a shame," a woman inside a taxi parked nearby yelled out.

During a Palm Sunday service, a bombing -  suspected to be a suicide attack - struck St George, killing at least 27 people and injuring 78 others. Only a couple of hours later, another suicide bomber blew himself up outside St Marks Cathedral in Alexandria, where Coptic Pope Tawadros II was worshipping, leaving 17 people dead and 40 injured.

The death toll of Palm Sunday's attacks increased to 45 on Monday, according to Egypt’s Ministry of Health.

Funerals were held for the victims of the two deadly bombings, the bloodiest attack targeting Egyptian Christians since last December’s bomb blast inside St Peter and St Paul's Church that killed 28 and wounded more than 40.

"The first goal of terrorism is to hit a nation, and killing Christian Copts serves to weaken it. For terrorists, Copts are an effective easy target," said Boules Halim, spokesperson for the Egyptian Coptic Orthodox Church.

The two young women outside St George’s were dressed in black, standing patiently. On Sunday, they came to attend the Palm Sunday service. Instead, they found ambulances carrying bodies of worshippers following the explosion.

"This attack brings huge sadness to all of us. Our brothers and sisters died for us," one of the women said with tears in her eyes.

"We’re asking that security personnel in Gharbiya governorate be replaced, especially those placed outside churches, as they are absolutely useless," the other says.

This attack brings huge sadness to all of us. Our brothers and sisters died for us

The two women, speaking on condition of anonymity, said they will visit all of the wounded in the hospital. None of their family members or friends were hurt in Sunday’s attack.

Meanwhile at Tanta University hospital, Christian visitors were flocking to various wards, hoping to find their loved ones in good health.

One young woman, who was crossing the hospital's courtyard, exclaimed, "My little daughter is fine, thank the good Lord!"

Inside, through the hospital's many hallways, Coptic families ran into each other and asked how their respective relatives were doing. Some of them brought bad news, sharing disheartening moments.

One woman had just lost her father. An elderly lady was in the intensive care unit, suffering from head injuries. Her daughter, weeping, doubted that her mother was going to make it.

In the same ward, a young woman lay on bench, crying incessantly, as relatives tried to console her. Her husband had severe injuries in the back of his head and abdomen, for which he would have to undergo a major operation.

Back at St George’s, an old couple outside the church came from a town 30 minutes away from Tanta to pay their respects.

"We are asking God to show the perpetrators the right path and be good people. We love our country", the man said.

"We are praying for Egypt and even for those who did what they did," stressed his wife. "We will continue going to church and praying."

Halim believes that in spite of the latest attacks, Christians are able to hold on to their faith by embracing human values, and countering religious fanaticism.

"Education, the media and moderate speech have a role to play in helping people to live in a merciful, peaceful way," the Coptic Church’s spokesperson added.