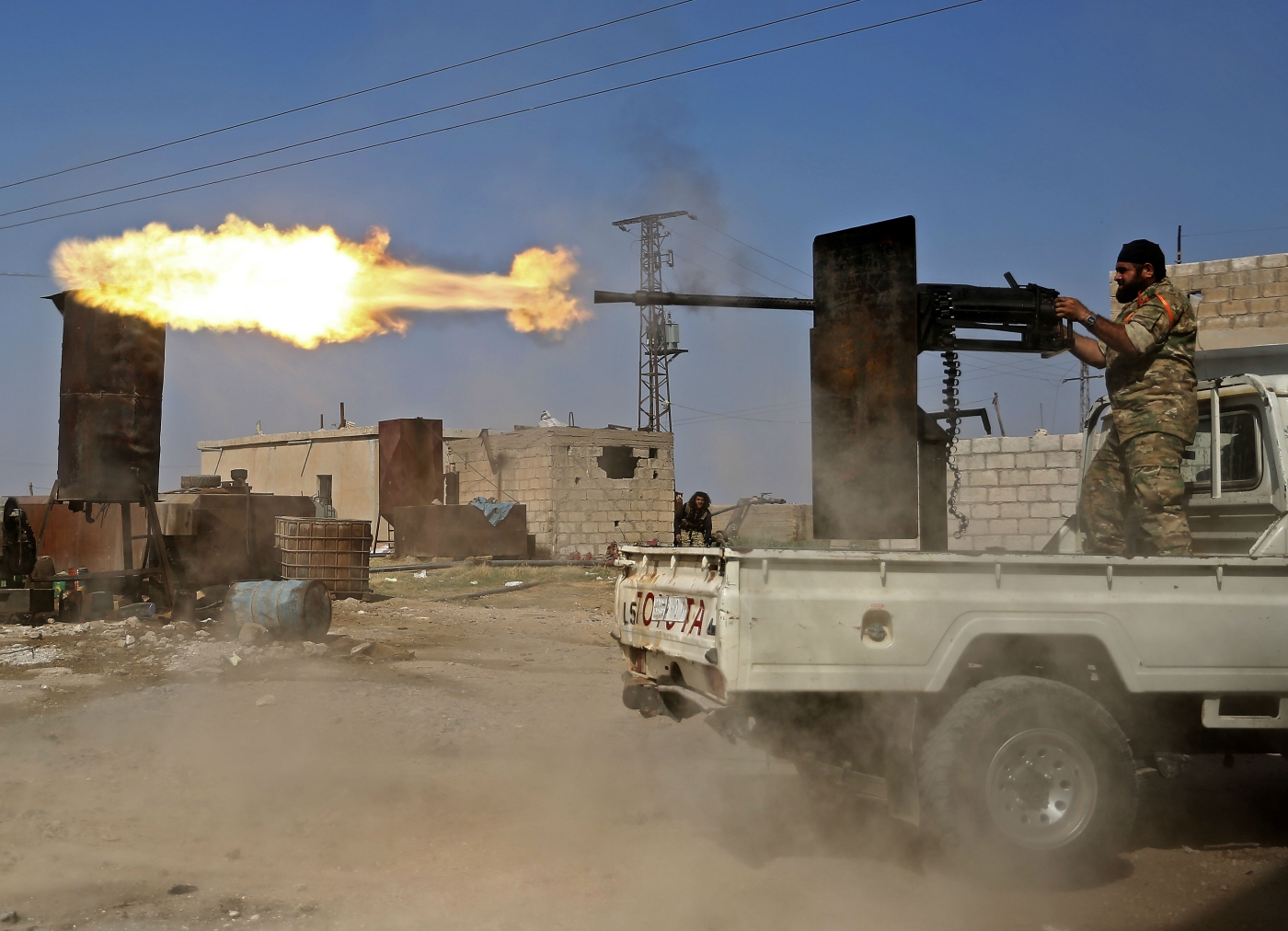 Turkish President Recep Tayyip Erdogan has told his US counterpart Donald Trump that Ankara would never declare a ceasefire in northeastern Syria and that it will not negotiate with Kurdish forces it is fighting in its offensive into the region.

In his weekly speech to his party’s parliamentary group on Wednesday, Erdogan said that Turkey wouldn’t stop its offensive until it established a 32-km deep buffer zone from the Syrian town Manbij to Iraq.

“Some countries say they would like to mediate between us and the terrorists. We won’t negotiate with terrorists,” he said, alluding to statements made by Trump. “But we have an offer. If terrorists leave the safe zone area with their weapons, we will end our operations.”

Erdogan also said the US threat of economic sanctions wouldn’t affect Turkey’s determination in Syria. "We will grow even stronger" in spite of such setbacks, he said, but your losses won’t easily be recovered from”.

Turkey pressed ahead with its campaign against the Syrian Democratic Forces (SDF) militia on Tuesday despite US sanctions and calls for it to stop, while Syria's Russia-backed army moved on the key city of Manbij that was abandoned by US forces.

The People's Protection Units (YPG), the key component of the SDF forces who fought Islamic State (IS), are seen by Ankara as a terrorist group linked to Kurdish separatist insurgents in Turkey. The White House said on Tuesday that US Vice President Mike Pence will meet with Erdogan in Ankara on Thursday to urge Turkey to implement an immediate ceasefire and to work towards a negotiated settlement with the SDF.

On Monday, Trump announced sanctions on Turkey to punish it for the offensive.

On Tuesday, a senior US official said Washington would threaten more sanctions to persuade Turkey to reach a ceasefire and halt its offensive.

However, speaking to reporters on a flight back from Baku, Erdogan said the offensive would continue until it reaches its aims, and added that he was not worried about sanctions.

"They are pressuring us to stop the operation. They are announcing sanctions. Our goal is clear. We are not worried about any sanctions," he said.

Erdogan said he told Trump in a phone call earlier this week that he should send a US delegation to Ankara to discuss their demands and try to reach an agreement.

The AFP news agency reported that the SDF was mounting a desperate defence to the east of the border town of Ras al-Ain, using tunnels, berms and trenches.

An AFP correspondent in the area said clashes around the town continued on Tuesday, despite Ankara's repeated claims it had captured the area.

The Syrian Observatory for Human Rights, a UK-based activist group, said Kurdish fighters had launched "a large counterattack against Turkish forces and their Syrian proxies near Ras al-Ain," later reporting "fierce combat" in the west of the town as well as in Tal Abyad.

Since launching their assault on 9 October, Turkish-backed forces say they have secured more than 100km of border, but Ras al-Ain has held out.

'It's their land after all'

Syrian army deployments into Kurdish-held territory following appeals from the SDF mark a major victory for Syrian President Bashar al-Assad and Russia, giving them a foothold in the biggest remaining swathe of Syria that had been beyond their grasp through much of its eight-year-old war.

Asked about the deployment of Syrian forces to the northern town of Manbij, Erdogan, who has backed Syrian rebels fighting to oust Assad, said he was not bothered, the Reuters news agency reported. "The regime entering Manbij is not very negative for me. Why? It's their lands after all. But, what is important to me is that the terrorist organisation does not remain there," Erdogan said, referring to the YPG.

"I told this to Mr Putin as well. If you are clearing Manbij of terrorist organisations, then go ahead, you or the regime can provide all the logistics.

"But if you are not going to do this, the people there are telling us to save them," he added.

Erdogan also said that an attack from Manbij on Tuesday, which killed one Turkish soldier, was launched by the Syrian government, and that Turkey "made the regime pay a heavy price" in retaliation.

The Turkish president may visit Russia for talks by the end of October, the RIA news agency reported on Wednesday, citing Kremlin spokesman Dmitry Peskov.

Speaking in Russia's Black Sea city of Sochi, Lavrov said the Turkish operation had allowed captured IS fighters to escape.