Residents rescued by Iraqi army lack food, water and power and contend with IS defectors in their midst Humvees trundle past in clouds of dust, while residents who chose to remain in their homes rather than flee - even as intense fighting raged around them - wave or make victory signs at the passing soldiers.

“We were afraid before the army entered the area,” Mohammed, 45, told MEE. “IS told us the Iraqi soldiers would rape our daughters and steal our possessions, but the soldiers have been so nice and kind.”

“For two-and-a-half years, we received nothing. But, without exaggeration, as soon as the [Iraqi Army’s] Golden Division arrived, they started helping us in any way they could, even sharing their food with us.”

“Anyway, where should we go?” asks his wife Aisha, 43. An explosion, just a few streets away, shakes the ground.

“In the camps, the cold is killing people and we hear there isn’t enough food, so we prefer to stay here in our home.”

Aisha insists that living on the fringes of an active conflict zone, even under the threat of rogue IS mortars, is preferable to joining the estimated 28,000 residents from Mosul now classified as "internally displaced people", or IDPs, in nearby camps.

Few residents who have chosen to stay can afford to buy from the stalls, their savings finished after two years of living with extreme austerity under IS. Construction engineer Fawzi, 38, who left his home that morning and walked 4km through fierce fighting to reach safety, holds open his empty leather wallet for the camera.

“Look, I have absolutely nothing,” he shouts. “I have been two-and-a-half years with no income and I sold all my things to buy food. When I had nothing left to sell, I couldn’t even go to the shop. I had to borrow food from my neighbours just to survive.”

He is among the small groups of fleeing civilians who trickle out of eastern Mosul every day, carrying white rags tied to sticks, their most precious possessions crammed into plastic bags. Some are escorted out by soldiers in army trucks but most, even the elderly, leave on foot.

Death is everywhere in Mosul. The fleeing civilians and donkey-pulled carts carrying eggs or small piles of nappies trundle past decomposing corpses of IS militants.

“We left these bodies for the dogs to eat and as a lesson to other IS militants,” says Marwan, an Iraqi soldier, who stops his Humvee beside one blackened, bloated corpse, its trousers down round its ankles, its genitals exposed.

“We have killed a lot of Daesh and mostly we burn the bodies, but we leave some as a sign to the terrorists that they cannot beat us, showing them the fate that awaits them.”

In the opposite direction, another speeding Humvee with a blanket-wrapped corpse lying across the bonnet, veers past, its gunner shouting: “Martyr, martyr,” indicating that the dead man was a soldier. More follow, carrying wounded soldiers and civilians to the field hospital, where up to 100 injured - mostly civilians - are treated every day.

He shrugs. 'It wasn’t so much different under IS'

The streets closer to the frontline are deserted. But then an Iraqi government truck loaded with boxes of basic essentials arrives. Within 30 minutes, hundreds of men, women and children appear, braving IS sniper-fire to queue for food.

Although full of gratitude for their liberation, severe shortages are fuelling desperation.

“Since our area was freed 20 days ago, we have had no water and no electricity and we have almost no food left,” says 18 year-old Aymen, standing in the increasingly chaotic aid queue.

“It’s getting very cold now and it’s difficult to keep warm at night. We have only a tiny amount of petrol left for our stove. We need urgent help.”

Looking exhausted after two days of fierce fighting in his district, Mahmoud, 58, shrugs his shoulders. “It wasn’t so much different under IS. We did have water, but only two hours of electricity every day,” he explains.

“We have become used to having nothing, but we hope international organisations will come and help now that IS are being beaten by the army.”

Aid trucks deliver supplies as near to the frontline as they can get every day, according to government official Mahmoud Nai.

“We came with 1,000 boxes today and we have already distributed 600,” he says, admitting that demand always outstrips supply. “We hope we will have enough for everybody over time.”

As hundreds more residents gather at either end of the sealed-off street, hoping to join the queues, Iraqi soldiers securing the aid distribution became tense. They are terrified that IS suicide bombers could infiltrate the civilians, and eventually fire shots into the air to prevent the crowds surging forward into the street.

'Please help me find out where he is'

For many of Mosul’s residents who suffered under IS for more than two years, life will never be normal again. As heavy artillery echoes down his street in the Aden district, Tawfik, 16, stands calmly in his gateway. He holds an awkward stance, a result of injuries he sustained during coalition air strikes on IS targets in Mosul in 2015.

“The first air strike came from nowhere and my father was injured and bleeding so much, we had to try and get him to hospital,” he recalls. “But after me and a neighbour got him into the car, another bomb fell, severing my arm.”

Trapped inside the vehicle, Tawfik was helpless. Poor medical services in Mosul meant his father died overnight and both he and his neighbour had limbs amputated. “It is all IS’s fault,” he says sullenly, his voice stripped of emotion.

He pulls up his sleeve to expose a strip of plastic-coated platinum running from bicep to wrist, pushed into a plastic hand.

READ: After decades of chaos, can Iraq's crises end in Mosul?

Further down the street, an elderly woman tugs at soldiers’ sleeves, pleading for information about her son who, she says, was captured by the Iraqi army on suspicion of collaborating with IS militants. “My boy was good, he wasn’t with Daesh,” she says. “Please help me find out where he is.” The soldiers answers brusquely that they could not help her.

'They testified that he was with IS'

IS collaborators posing as civilians are one of the biggest threats that Iraqi soldiers face.

“To be honest, it is sometimes impossible to know if these people were with IS or not,” says Feras, a soldier. He gestures at the men queuing up with their IDs at the first civilian registration and screening point. “We rely a lot on other residents reporting them.”

Arrests are made every day: a scuffle outside the makeshift registration point for fleeing Mosul residents heralds another one.

The man is brought out and thrown into the back of a Toyota, where he lies on the floor among dirty cooking pans, trembling uncontrollably

A man with his face wrapped in a blue t-shirt is dragged inside the building by a group of soldiers, one of whom grabs a length of electrical cable hanging limply from a pylon on the way in.

After an hour of interrogation, the man is brought out and thrown into the back of a Toyota, where he lies on the floor among dirty cooking pans, trembling uncontrollably.

“Here at the registration centre is where we are making most of the arrests. This guy snuck out of Mosul with civilians and families,” explains Ratha, a first sergeant

“He had shaved his beard but the families knew him and saw him hide his weapon before he joined them, so they testified that he was with IS.

“We checked his name on our database and found it on our blacklist. Now he is being taken away for interrogation.”

Editor's Note: The security situation in Mosul is still uncertain: many residents interviewed for this piece did not want to give their full names. 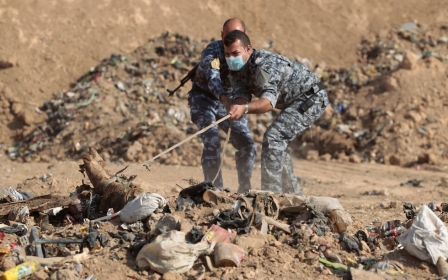 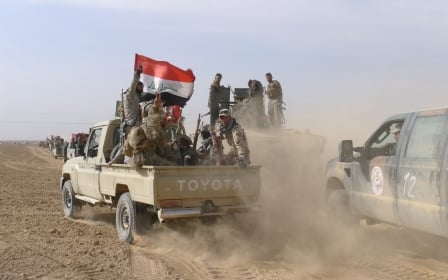