Ramon Blecua latest to become sick in Iraqi city, which has seen tens of thousands of residents hospitalised by contaminated water Blecua said he had not planned 'to take my solidarity with the people of Basra that far, but certainly now share how you feel' (Ramon Blecua)
By
MEE and agencies

The European Union's ambassador to Iraq has said he has become sick in the city of Basra from polluted water, which has seen tens of thousands of residents hospitalised.

Envoy Ramon Blecua said on Thursday he felt ill and "had to cancel several meetings" in the southern city.

"UNICEF doctor diagnosed the cause as water pollution," he wrote on Twitter, referring to the United Nations children's agency.

He said he had not planned "to take my solidarity with the people of Basra that far, but certainly now share how you feel".

More than 90,000 people have been hospitalised in Basra due to polluted water, according to Iraq's high commission for human rights.

The health crisis also hit a top football club from Baghdad last month, when the al-Hussein team were forced to postpone their Basra match after 10 players became sick from the water, the AFP news agency reported.

Thousands of residents have protested against the water crisis and the broader dire state of public services, prompting pledges from Baghdad to improve conditions in the oil-rich southern province.

The Shatt al-Arab, Basra's main river and the historical inspiration for the Sinbad the Sailor stories, is a confluence of the Tigris and Euphrates and runs through the centre of the city.

Videos recorded by locals have shown water from river turned black by pollution or caked with salt.

It is now polluted with "germs, chemicals, [and] toxic algae coupled with unprecedented concentrations of salt almost like that of seawater," Shukri al-Hassan, marine science lecturer at Basra University, told the Reuters news agency. 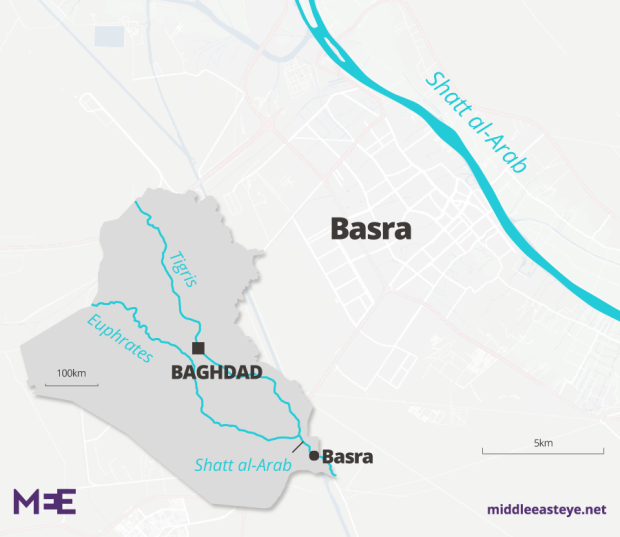 Speaking to Middle East Eye on Monday, Naqib Alluaibi, a protest organiser in Basra, said: "It is the worst, ever. You can see that there are no birds flying because of the poisoned water in Shatt al-Arab. We are losing lives."

Blecua said he was in Basra as part of EU efforts to support projects linked to the delivery of services, as well as those related to good governance and job creation.