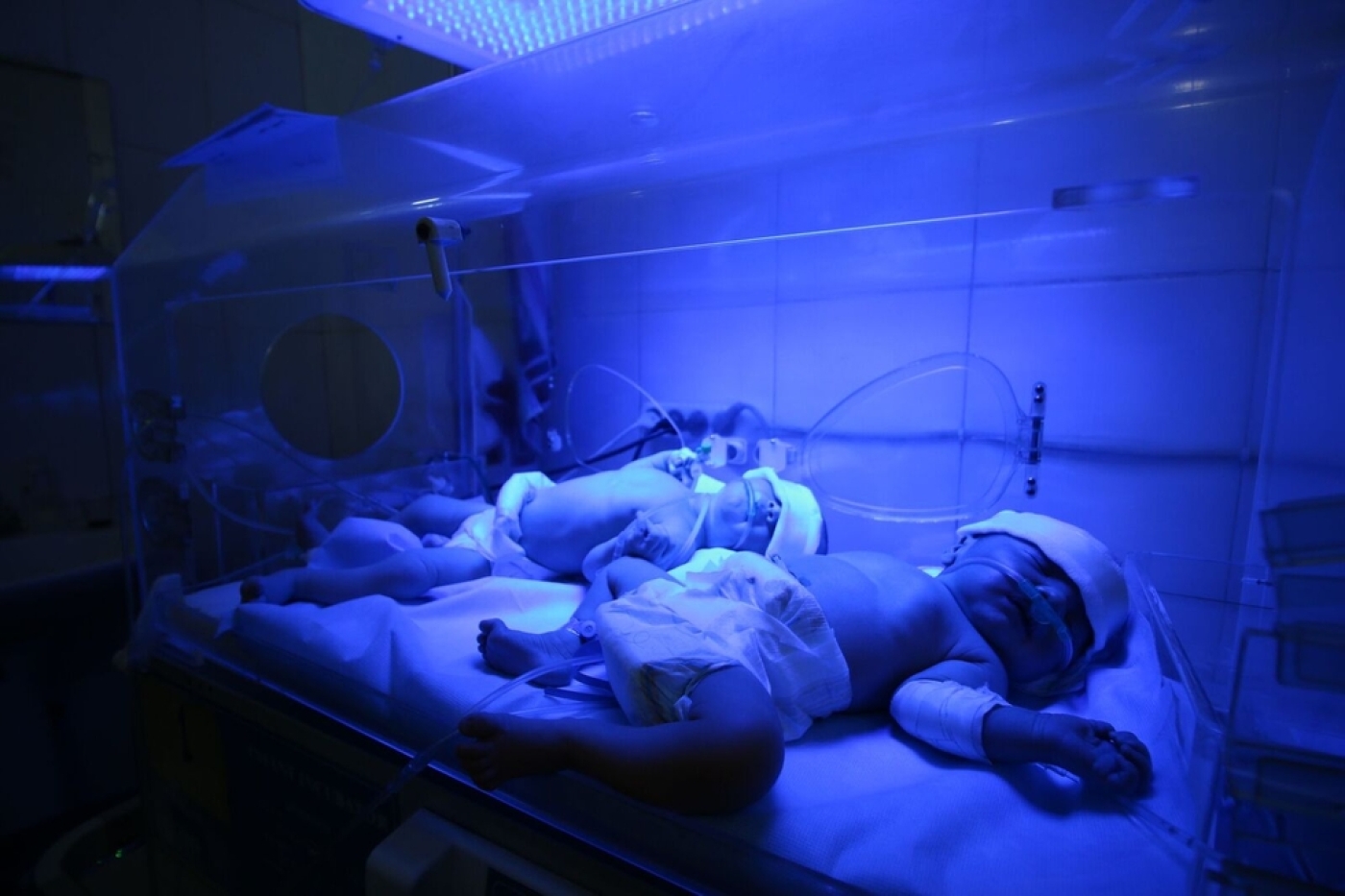 The infant death toll was initially placed at one after the 23 July bombings, after an infant’s oxygen supply was cut, but local doctors revealed that three more babies died from dust inhalation the next day.

There had been a total of 11 babies in incubators at the time of the attack.

The first air strike – which aid workers said came from Syrian government warplanes – prompted frantic staff to move the infants to the darkness of the basement for protection when it landed near the hospital last weekend.

The deaths were particularly devastating for the staff at the hospital, which is run by a group of Syrian doctors, the Independent Doctors’ Association, and backed by the charity Unicef. One of the babies killed in the attack, identified as Hassan, had recently been photographed as part of a campaign to keep the children's hospital in service.

He was pictured alongside another new-born and balloons bearing the words “IDA will continue”.

Um Yazen, the hospital’s head nurse, told MEE from Aleppo that Hassan had been having chest problems prior to the attack and after the first air strike was struggling to breathe. “But the second air strike destroyed the intensive care unit he was in so he died. The three other children were killed because of gases and dust that rose after the attack.”

The parents were informed of their children’s deaths and Hassan's father was photographed being handed his son wrapped in a white sheet.

“Hassan's father was very sad because this is the second son he has lost in the war. The parents were very angry,” Um Yazen said.

The children’s hospital was among five medical facilities, including a blood bank, damaged in the al-Shaar district in rebel-held Aleppo last weekend. Some 300,000 people have been under siege since 7 July in the eastern section of the city. Analysts say the Syrian government and its Russian allies are strangling the rebel-held districts quarters before advancing to retake the whole city.

There were 26 children in the hospital at the time of the attack, which forced it to close temporarily.

The hospital’s head nurse in Aleppo told MEE that the first floor was destroyed and that the basement was now the “contingency”.

“We have come back to work after the hospital was repaired,” she said.

Images taken the day after the air strikes - published for the first time by MEE - showed the newborns in a dark room lit only by emergency lamps and widespread damage to medical equipment in the hospital.

Rebel-held Aleppo’s 100,000 children have suffered increasingly as the siege has tightened.

A field co-ordinator for Shafak, an NGO that runs a network of ambulances around the city, estimated that children comprise about 35 percent of all casualties.

Death rates are rising in particular among children, according to the aid worker, who was identified only as Rami because they can no longer evacuate patients with head injuries to Turkey, as they did prior to the siege.

Abu al-Hada, 29, another aid worker with the International Pitying Hearts Society, told MEE from Aleppo that there were not enough aid workers or ambulances and that the city’s minors were deprived of their childhood.

“Since the start of the siege the intensity of the shelling has increased like crazy – using all kinds of weapons – sometimes by Syrian planes and sometimes by Russian ones,” he said.

The air strikes were “non-stop,” with the intention of creating casualties, he said. “They are happening in all areas of [rebel-held] Aleppo, even where the majority of residents are women and children.”

“These children are experiencing the atmosphere of a real war,” he said. “They have not seen any of this country. A child who is currently in Aleppo does not have access to any of their rights.”

Estimates as to how long supplies of medicine, food and baby milk in Aleppo will last vary, from around one to three months.

'The IDA had been treating cases of malnutrition before the siege, and published images of an apparently underweight child in Aleppo receiving medical attention.

It said that 14-month-old Ahmad was admitted to the malnutrition ward at the children’s hospital due to “severe acute malnutrition, dehydration and weight gain failure” after his mother was unable to breastfeed him for two months.

Abu al-Hada said that the siege had caused civilians’ supplies of all products, including bread, fuel, vegetables and meat to dwindle rapidly. A lack of diesel for ambulances was a particular problem because it meant that ambulances cannot always get to the site of air strikes.

Bombardment of children’s medical facilities has not been limited to Aleppo.

On Friday, a Save the Children-backed maternity hospital in Idlib province was hit in a brutal aerial attack that killed two people, and severed a pregnant woman’s leg. Several babies were also wounded when their incubators crashed to the floor.

The bomb hit the entrance to the hospital in Kafr Takhrim, which is the biggest in the area, and where staff carry out more than 700 deliveries a month. At the time of the bombing, two operations were underway and a woman was in labour. The hospital is currently thought to have ceased functioning except for the emergency room, and the generator was damaged in the attack.

Four hours after the attack, witnesses on the ground said there were still warplanes circling overhead.

Save the Children did not point the finger at any one party, but only Russia and the Syrian government are carrying out air strikes in Idlib province.

Sonia Khush, the charity’s Syria director, said: “Bombing a maternity hospital which is helping women living under the shadow of war to give birth safely is a shameful act, whether it was done intentionally or because due care was not taken to avoid civilian areas.”

Kafr Takhrim is also the location of the local “White Helmets” civil defence team headquarters, which was targeted again on Friday after being heavily damaged in air strikes last month.