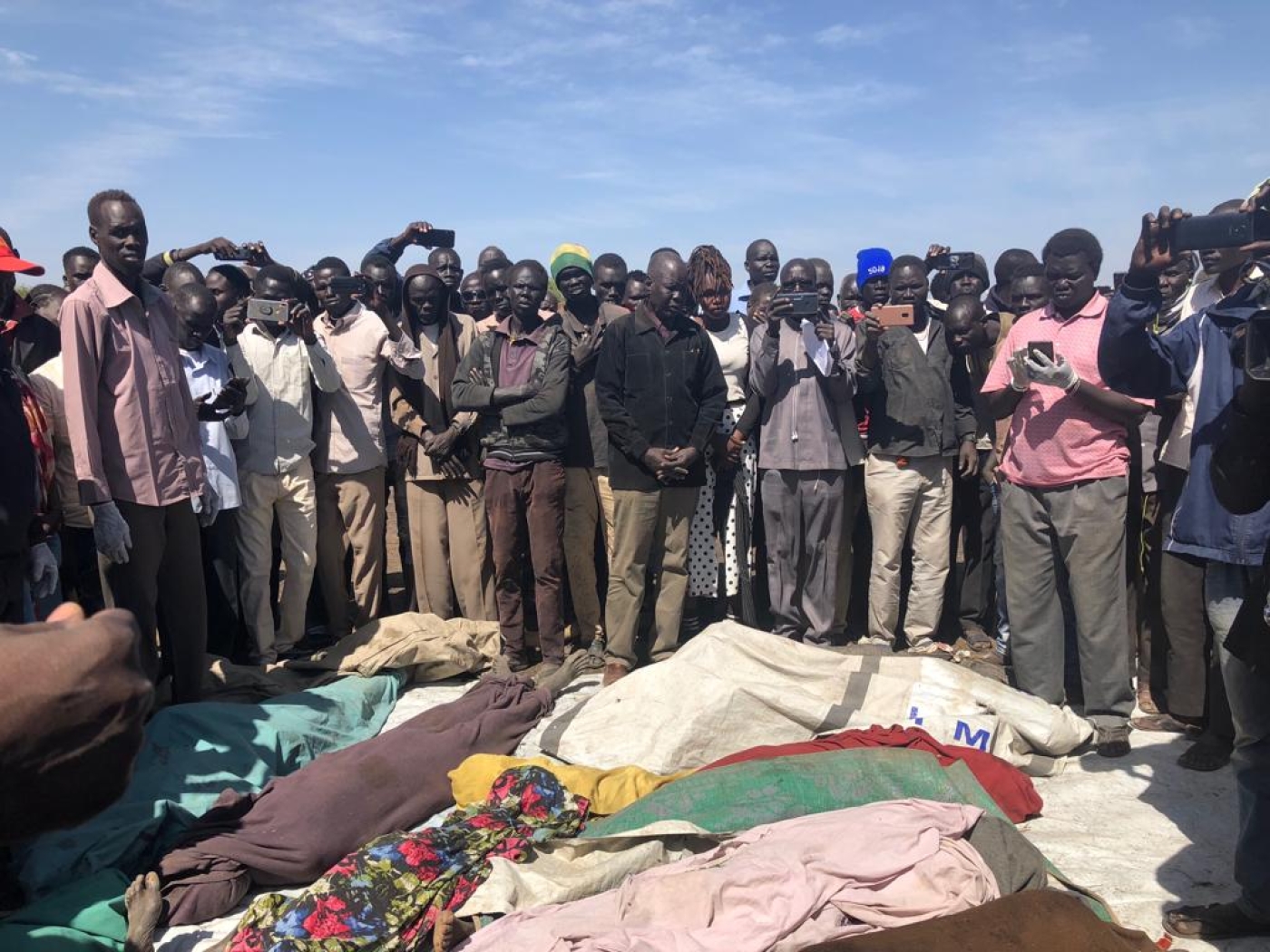 Villagers gather around the bodies of some of those killed in Wednesday’s attack (MEE/Jan-Peter Westad)
By
Peter Oborne
, Jan-Peter Westad
in
Kolom, South Sudan

Last weekend, a local cattle farmer in the contested region of Abyei, between Sudan and South Sudan, clashed with an armed group of nomadic tribesmen on motorbikes.

But the killing of at least 32 people in the Dinka village of Kolom on Wednesday morning in a suspected Misseriya attack was on a scale far greater than any clash in recent memory, villagers and local officials told Middle East Eye.

Visiting Kolom just four hours after the attack, MEE found huts still burning with some containing the charred remains of their occupants. Elsewhere villagers were digging mass graves for the victims and preparing for funerals.

Many expressed anger at the failure of the local United Nations peacekeeping force to protect them.

Survivors said they had asked UN peacekeepers on Tuesday whether they should hide in the bush to avert a massacre. They said the peacekeepers advised them to remain in the village because they could not guarantee their safety if they fled.

Villagers told MEE that the raid started at about 7.15 am local time when men armed with assault rifles attacked the unguarded village.

When they departed about an hour later, at least 32 villagers were dead, including eight children, according to local officials.

Fifteen children were abducted and more than 20 people were injured. Twenty-two of the village’s huts had been burnt down, some with people inside. Their charred bodies lay in plain view. The clinic and the church were destroyed.

In Khartoum, Sudan's transitional government said that at least 29 people had been killed and condemned the massacre, also accusing UN peacekeepers of failing to protect civilians. It also said it had dismissed its senior official in the region, Salih Saloha.

A United Nations peacekeeping force known as UNISFA was deployed in Abyei in June 2011, weeks before South Sudan declared independence from Sudan with the status of the disputed border region unresolved.

'The attack took place in the space of an hour, soon after the previous patrol had left the area'

There are currently more than 5,200 military personnel deployed as peacekeepers in the region, according to the UNISFA website.

Villagers said that deployment of UN soldiers had patrolled the village overnight but quit their posts at about 6 am, one hour before the raiders arrived.

Outside her still smouldering hut, a heavily pregnant woman who gave her name as Alual told MEE that her two sons aged 10 and 15 had been abducted.

She said village elders had told UNISFA the previous day that they wanted to scatter into the bush, but that “the soldiers told them to wait”.

She added that six of the elders who had attended the meeting with UNISFA were now dead.

A UNISFA spokesperson told MEE that peacekeepers had been guarding Kolom for the past three days but did not have a forward operating base near the village. The attack had occurred between the departure of one patrol and the arrival of its replacement in the area.

“The attack took place in the space of an hour, soon after the previous patrol had left the area to return to the base and before a new one arrived,” he said.

“The newly-arrived patrol managed to apprehend some of the alleged perpetrators. The mission will continue to investigate all the circumstances surrounding this unfortunate incident, and has convened a team for these purposes.”

The spokesperson did not, however, answer questions about whether peacekeepers had told the villagers of Kolom not to flee to the bush.

The great majority of permanent residents of Abyei regard themselves as South Sudanese. In a referendum held in 2013, more than 99 per cent of voters favoured joining South Sudan.

But this poll has never been recognised by governments in Khartoum, which maintains that the Misseriya tribe, which claims historic rights to the land, was not consulted. Around 35,000 Misseriya spend up to six months each year in Abyei to graze their cattle during the dry season.

Many South Sudanese accuse Khartoum of supporting and providing arms to the Misseriya in order to drive the Dinka people off the land.

The situation is inflamed by the presence of oil in the region, leading to disputes between the two nations.

Kuol Alor, the chief administrator for Abyei, laid the blame for the killings squarely on the Misseriya, adding “definitely, they are backed by Khartoum”.

He said the attack on Kolom was the “worst atrocity I have seen” and “the intention is to burn the villages so people can be driven out”.

'When the Arabs come they [UN soldiers] run away'

When asked by MEE about the role of the UN peacekeepers, he said that “if they told the villagers not to leave because they could protect them, then the UN is to blame”.

On Thursday, angry crowds gathered outside Alor’s office to protest against the lack of security being provided by the UN force.

One local church leader, Joseph Kat, accused the UN of cowardice. He said “when the Arabs come they run away”.

Abyei has long been contested land, with Misseriya herders travelling south from their lands in the Kordofan region in search of better grazing lands, bringing them into dispute with local Dinka farmers. Cattle-rustling and abductions are common.

But Wednesday’s attack appears to be the deadliest incident in the region’s recent history. A report by the UN Ssecretary-general’s office recorded a total of “18 incidents of armed violence... resulting in 10 fatalities,” between April and October 2019.

The future status of Abyei is currently being discussed in peace talks between Sudan and South Sudan, which were revived last year following popular protests in Sudan which led to the end of Omar Bashir’s 30-year rule and the installation of a transitional government.

On Thursday, Mohamed Hamdan Dagolo, the vice president of Sudan's transitional council commonly known as Hemeti who is currently in Juba, accused those responsible for the killings of trying to sabotage the talks.

Hemeti also said he had delivered a message expressing regret for the killings to South Sudanese President Salva Kiir Mayardit. Sudan in Transition
'He is our leader': Sudan's PM warmly received in rebel-held south