EXCLUSIVE: UN in talks to evacuate 100,000 from east Aleppo A United Nations source speaking to Middle East Eye on condition of anonymity said on Tuesday that it stood ready to evacuate 100,000 people from besieged rebel-held territory in eastern Aleppo if a 24-hour ceasefire is put in place.

The source told MEE that the UN had been in negotiations with representatives from the Syrian and Russian governments in the hope of evacuating civilians amid a deteriorating humanitarian situation described earlier on Tuesday as a "meltdown of humanity" by UN human rights chief Rupert Colville.

According to the source, Russia said it would agree to a ceasefire if those fleeing the besieged areas left their weapons behind. Such a move would be unprecedented as civilians evacuated in previous UN-orchestrated operations have been allowed to take small arms with them.

Current reports coming from east Aleppo indicate that at least 100,000 people are trapped in an area which is two square kilometres with bombs raining down on trapped civilians, according to a press statement released by the Independent Doctors Association.

"Countless White Helmets [civil defence force volunteers], doctors, nurses, and humanitarians have been targeted and killed in the regime's cruel assault on Aleppo," the IDA said in a statement. "The regime have been trying to kill us for five years, please don't give them this chance."

In a video, Abdulkafi al-Hamdo, an English teacher on the run from pro-Assad forces, sends his 'last' message from a besieged rebel-held neighbourhood in east Aleppo.
The IDA which previously had a network of doctors and hospitals in east Aleppo has shut down its medical facilities after enduring heavy bombardment from Syrian government and Russian warplanes.

Supplies have been running low for a number of months as the Syrian government renewed its siege and campaign to take control of east Aleppo from a coalition of rebel groups controlling the area.

The fate of Syrians remains unknown as many have fled their homes in the hope of seeking shelter and protection from the bombardment.

Monther Etaky who is a resident in east Aleppo told MEE that "everything was like hell" in the besieged area where heavy fighting is currently taking place.

Speaking via WhatsApp, Etaky said: "You can't imagine how 80,000 people are trying to survive and fleeing from one place to another place, starving and looking for shelter, afraid of what will happen if captured by the regime."

UN human rights chief Rupert Colville earlier described the situation in east Aleppo as a "complete meltdown in humanity", with the UN also citing reports of civilians including women and children being killed in the street by Syrian government forces.

MEE can confirm that the UN verified this report by using six different sources, including one source that it has been using for a long time to verify alleged human rights abuses on the streets of Aleppo.

Reports have also emerged of many Syrian men who have left rebel-held areas being conscripted into Syrian government forces.

Recapturing the entire rebel-held area of Aleppo will constitute the biggest battlefield victory yet for Syrian President Bashar al-Assad, who has been bolstered by support from Russia, Iran and allied militias during the country's more than five-year war.

For rebels, it will mark a sobering loss and leave them without a significant presence in any of Syria's main cities. They still hold much of the countryside west of Aleppo and the province of Idlib, also in northwest Syria.

After days of intense bombardment of rebel-held areas, the rate of shelling and air strikes dropped considerably late on Monday and through the night, a Reuters reporter in the city said.

The military official said the rebels were fleeing "in a state of panic", but a Turkey-based official with the Jabha Shamiya rebel group in Aleppo said late on Monday that they had established a new frontline along the river.

Celebrations on the government side of the divided city lasted into Monday night, with the Reuters reporter there describing the bullets coming "like rainfall" as fighters shot into the air in triumph. 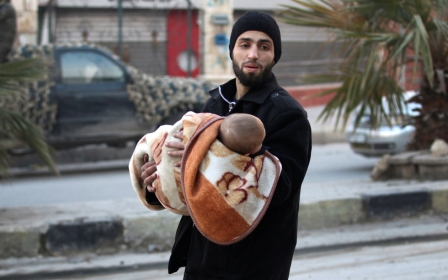