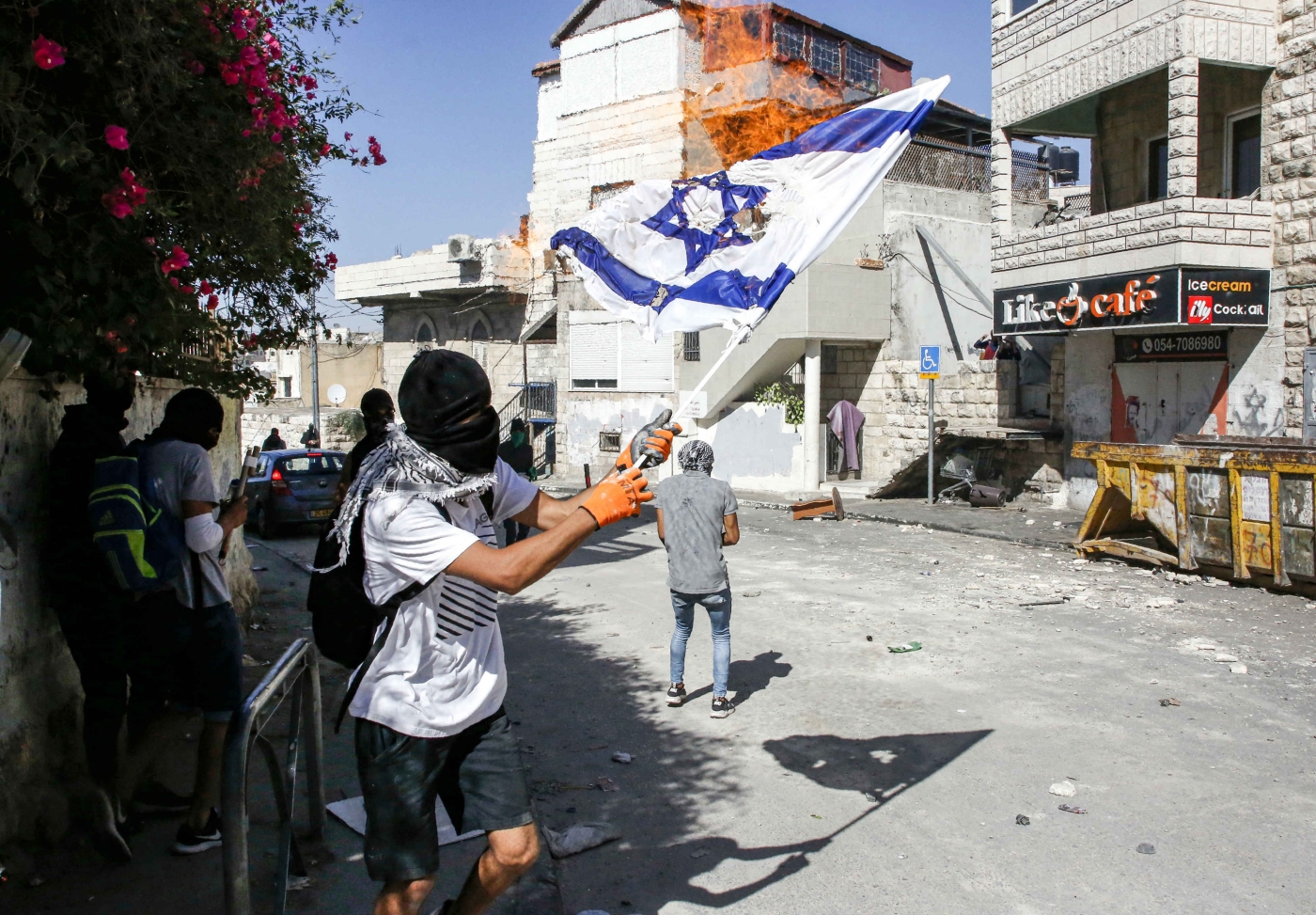 In the Palestinian neighbourhood of Issawiya, Israeli police cars are not tolerated.

Any signs of a police presence in the town quickly escalates into confrontations, with Palestinian youths throwing rocks and Molotov cocktails at the vehicles, and Israeli forces firing live ammunition, rubber-coated steel bullets and tear gas.

The town, home to more than 15,000 people, is well-known among Palestinians as a beacon of civil resistance to the Israeli occupation. “Issawiya is one of the most inflamed areas in Jerusalem," Fadi Elayan, a 33-year-old resident of the town, told Middle East Eye.

"The police operate under the logic that if Issawiya is subdued and its rejection of the occupation is silenced, then the rest of Jerusalem is quashed.”

The extent of how determined the Israeli police are to stigmatise the town was exposed on Tuesday when it was revealed that during a reality TV series about the police force, officers planted an M-16 rifle in the house of an Issawiya resident and then documented its discovery.

Over the past two months, Issawiya has been the target of a violent and disruptive Israeli crackdown, launched shortly after Eid al-Fitr, under the pretext of security.

The town spent the summer as the target of a policy of collective punishment, with more than 250 political arrests, hundreds of Israeli-issued violations against vehicles and stores, dozens of residents wounded by Israeli fire, and a funeral procession for a young Palestinian man killed by Israeli forces.

Two eyewitnesses told Middle East Eye that the 20-year-old Palestinian did not pose a threat when he was shot.

A day earlier, images of a soldier drenched in red paint hurled at him by the town’s youths had been widely shared by Palestinians on social media.

Such crackdowns are not uncommon for the town - an annual occurrence that Issawiya’s youths and families pay for with their lives and freedom.

But according to the residents, the latest campaign is one of the longest and most violent in the neighbourhood’s recent history - having exceeded 50 consecutive days and implemented by various arms of the Israeli security and civil agencies.

The raids by Israeli forces appear like an organised parade - four large GMC vehicles drive into the village, accompanied by border guards and at times an on-foot force.

The officers throw sound bombs on to the streets to break up the youths and instil fear, before embarking on a humiliating and aggressive stop-and-frisk campaign.

Carrying out the crackdown are the Israeli border police, special forces, traffic police, as well as municipal and tax authorities, which focus their efforts throughout the day, and in particular when residents return home from work and young people are out on the streets. 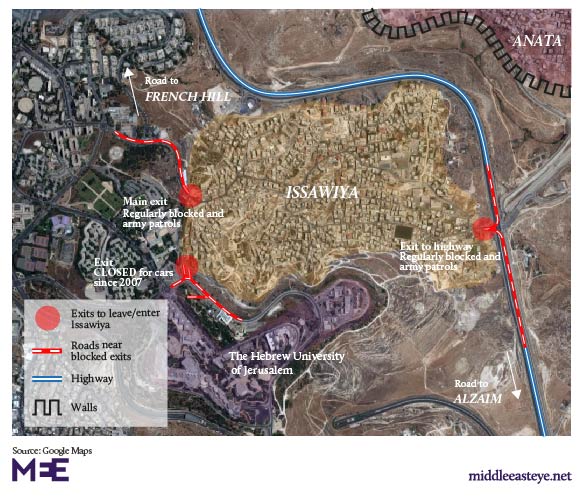 Like the rest of East Jerusalem, Issawiya came under Israeli occupation in 1967 and is today restricted on all fronts by Israeli settlements and their infrastructure, all of which are illegal under international law.

To the eastern border of the town lies Highway 1, a road that was built to connect settlers in the occupied West Bank to Jerusalem and Tel Aviv.

To the south, Issawiya is straddled by the Hebrew University campus. To the north and west are the settlements of French hill and Tsameret HaBira.

The town's location means that it is subject to disruptive restrictions on movement in the form of roadblocks and arbitrary searches.

'Punish the town and its families'

When carrying out arrests, Israeli forces do not hesitate to use force, assaulting youths, breaking the front doors of homes before raiding them, and carrying out violent searches.

Local sources in Issawiya told Middle East Eye that over the past two months as many as 250 young men were arrested by police, mainly in overnight raids.

The majority were detained for short periods and released, many on bail and house arrest orders of varying periods, some lasting up to a week.

At least five remain in detention according to lawyer Mohammad Mahmoud, who represents their cases in Israeli courts.

Mahmoud told MEE that the youths face various charges, including participating in demonstrations and confrontations with Israeli forces, as well as throwing stones and Molotov cocktails following the news of Obaid’s killing.

The sum of money paid by the residents in bail for those who were released exceeds some 60,000 shekels ($17,200) according to Mahmoud.

Mohammad Abu el-Hummos, a political activist in the town, says that Israeli measures in Issawiya are highly arbitrary and a form of collective punishment.

They represent the “desire by Israeli occupation police to carry out any raid or arrest, irrelevant of the reason, merely to punish the town and its families,” he told MEE.

Father summoned by police over toddler

On 30 July, the story of four-year-old Mohammad Elayyan went viral, when he and his father were summoned for interrogation by the Israeli police.

The boy’s grandfather, Nayef Elayan, said in an interview that Mohammad was playing on the street with other children when an Israeli police car raided the area. Later that day, Israeli forces went to Mohammad’s home in search of the boy, claiming that he had thrown stones at them.

When they realised that he was four years old, and that they could not arrest him as per the law, they handed his father, Rabiaa, a summons the next morning requesting that he bring Mohammad along.

In support of the father and son, a group of residents from Issawiya accompanied them the next day to the police station on Salah al-Din street, the main commercial artery in East Jerusalem.

Due to mounting pressure, Israeli authorities did not meet with the child, but carried out an interrogation with the father.

The latter said officers threatened him with never seeing his son again if he were to throw stones at them.

“Children do not pose a threat,” said Fadi Elayyan, one of Mohammad’s relatives.

“All that’s happening is an attempt to terrorise the families of Issawiya - from young to old.”

A day after Mohammad's case, Israeli police issued a summons to another Palestinian of resident Issawiya over the alleged actions of his six-year-old son. According to official Palestinian Authority news agency Wafa, Firas Obaid received a warrant asking him to come to an Israeli police station for questioning after his son Qais, six, was accused of trying to throw stones at Israeli officers patrolling in the town.

In another high-profile case two weeks ago, Israeli forces attempted to arrest 24-year-old Iyad Attiyah, who suffers from Williams Syndrome, a rare genetic disorder that can cause physical and cognitive problems.

His mother, Laila Attiyah, told MEE that police raided their home after midnight searching for her son.

Iyad was summoned by intelligence services, an order that was only cancelled after social services intervened with papers to prove his illness.

As part of the recent crackdown, Israeli traffic police have been stationed at each of the entrances to Issawiya.

Officers arbitrarily stop vehicles to carry out time-consuming inspections of cars, licences, insurance and IDs, before handing out violations ranging from between 250 to 1,000 shekel fines ($70-$285), adding to the economic burden of the residents.

Abu al-Hummos told MEE that dozens of vehicle licences were revoked due to supposed traffic violations for the “most ridiculous reasons” during the sudden inspections.

“In normal situations, such reasons would not lead to violations or deactivation of a vehicle licence in non-Palestinian neighbourhoods,” said Abu al-Hummos.

“There are cars which have only surpassed their registration period by a month, which isn’t against the law, yet the car owners are still given violations,” he said.

On Thursday morning, police pulled over a bus carrying children between eight and 12 years old who were on the way to a recreational trip.

The driver was handed a violation, his car registration was revoked, five young men who were accompanying the children as guides were arrested.

Commercial stores have not been spared. Israeli municipality and tax teams raided shops on several occasions, particularly ones on the main road, and carried out inspections of permits, equipment and tax payments.

In reaction, storeowners attempted to avoid accruing more tax violations by closing their shops, and opening them only after police left.

As a result, business in the commercial market in the town has slowed down greatly.

When asked about the motives behind Israel’s crackdown, the families in Issawiya point to the longstanding and consistent stand that the neighbourhood has taken against the occupation.

The town is one of the most prominent in Jerusalem in responding to aggression by Israeli forces and their actions are not limited to rejecting Israeli measures taken in the name of security.

The families of Issawiya also reject the presence of any Israeli “civil” institutions, such as a government-funded community centre in the town.

On several occasions, youths from the town have set the community centre on fire, the last of which followed the killing of Obaid, to send a message of resistance to Israel.