Anbar, Iraq's largest province, has been rocked by violence since the beginning of 2014 More than 1,500 schools have been damaged or destroyed as a result of the conflict in Iraq's troubled Anbar province alone, a spokesman said Monday.

Anbar is Iraq's largest province. It has been rocked by violence since the beginning of 2014, months before the Islamic State (IS) group launched a massive nationwide offensive that saw it conquer swathes of the country.

It is currently the main focus of the government's efforts to regain lost ground, with large military operations underway in several parts of the province and multiple daily air strikes by war planes from the US-led coalition.

"Anbar has been hit badly... More than 1,500 schools have been partially or completely destroyed," Eid Ammash, a spokesman for the provincial council told AFP.

Anbar stretches from Iraq's western borders with Syria, Jordan and Saudi Arabia all the way east along the Euphrates to the outskirts of Baghdad.

"Most of these schools were targeted directly by the criminal gangs of Daesh," Ammash said, using an Arabic acronym for IS.

"The others are places that Daesh used as bases and were targeted by the Iraqi security forces and the coalition air force, or were simply on the frontline of the fighting," he said.

"It will take a lot of money and at least two-and-a-half years after Anbar is fully retaken from Daesh for these schools to be rebuilt and rehabilitated," Ammash said.

He said no area was spared, with damaged schools from Karma, near Baghdad, to al-Qaim on the Syrian border, as well as in areas around the main cities of Ramadi, Fallujah and Haditha.

The dire state of access to education in Anbar is replicated in several other regions of Iraq affected by a conflict that has displaced more than three million people.

According to the latest figures from the United Nations, more than 70 percent of displaced children do not have access to education.

"Most schools in affected areas are overcrowded or operating in double and triple shifts to accommodate demand with limited basic classroom amenities," the UN report said.

Besides the schools that have been destroyed or damaged, others are occupied by armed groups. Even when they are vacated, the cannot be used until cleared for unexploded ordnance. 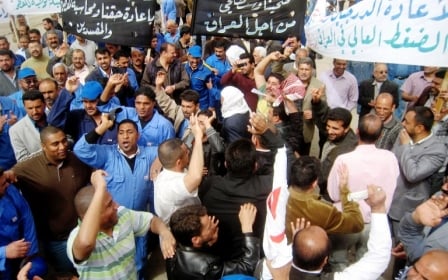