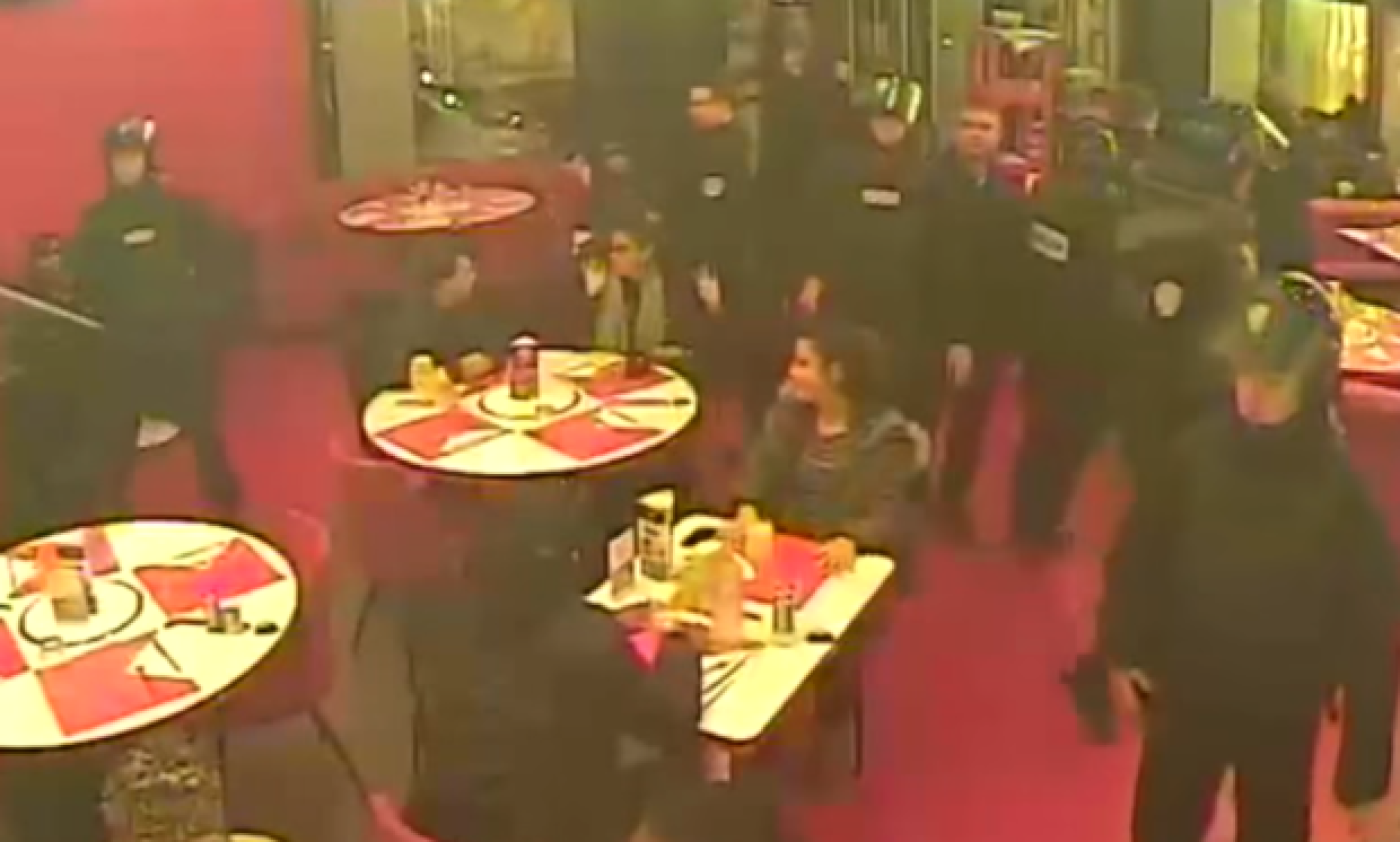 Photo: Screenshot from the surveillance video of the halal restaurant Pepper Grill, which was raided by the police within the context of the emergency law adopted by France following the Paris attacks last November (YouTube)
By
Hassina Mechaï

On Tuesday, 8 December at 8:00 pm in Argenteuil, northwest Paris, police conducted a violent search at the Baytouna shelter for suspected “jihadist” activity. This charity shelter welcomes dropout women without social or family ties.

Virginie*, vice-president of the Baytouna shelter, recounted the series of events to Middle East Eye: “They violently kicked the door open and shouted ‘police’ and then pushed against the wall the only woman that was there. On the premises there’s a studio flat rented by a women with her two kids. The police went there first, ransacked the whole place, asked her what sort of connection she had with the charity, and finally admitted they had made a mistake.

“These women in difficulty have literally nothing  - a few clothes, a couple of document papers. The few things they had were turned upside down by the police,” said Virginie. She claimed that four doors were smashed, the furniture damaged and cellphone data collected. “Inappropriate comments” were made to women by some policeman, such as “You naughty girl,”, and “That’s a shame you are wearing the hijab, you’re hot”.

The police report of the search was given to the charity to be signed but was only found two days later because of the mess.

“The following day we went straight to the police station in order to find out what we were accused of. The only answer I had was: ‘Well, you know, the state of emergency has been declared’. At the prefecture we were told nothing either. We finally found the search warrant, which indicated that our charity ‘accommodates individuals who constitute a threat to the public order and security’. We heard later from the media that Baytouna was accused of being the home of women whose husbands went to fight in Syria, which we totally dispute,” said Virginie.

Was this police search an unfortunate slip-up? Since the start of the state of emergency in November - which gives the police the right to undertake home searches without judicial warrants – civil liberties associations have been collecting more and more testimonies of people who have experienced violent police raids.

For instance, at a halal restaurant called Pepper Grill, armed police barged in amid surprised customers. The surveillance footage of the raid went viral on social media. In the Haute-Garonne region, a man was put under home arrest because he allegedly “was acquainted to Salfist groups”. The man turned out to be a practising Catholic. In the Dordogne region, during the COP21 summit that ended in Paris earlier this month, local farmers had their farms searched for allegedly carrying out “terrorism related activities”.

According to Yasser Louati, a spokesperson for the Committee against Islamophobia in France (CCIF), “arbitrariness, brutality and humiliation have been common during these police searches. The search warrant is granted not by a judge, guardian of liberties and rights, but by the prefect. The logic of security prevails.”

He lists several other incidents: damaged properties, religious and sexual insults. “Some witnesses said they heard the police saying ‘All of this is your fault,’ referring to the Paris attacks, ‘Shut up you fat ... ’ to a mum. Other witnesses refer to ‘a man beaten up by the police’ and ‘a family left without a front door in the middle of winter time’. All this, without apologizing whatsoever. Why?”’

He also noted that some policemen behaved properly. “Some of them seemed very embarrassed by the whole situation and the disproportionate use of force.”

The CCFI is questioning the efficiency of these measures. Indeed, since the state of emergency has been declared, according to the ministry of Interior, more than 2,700 home searches had been carried out, an average of 87 a day. Three hundred and forty-six legal actions had been initiated, but mainly for common law related cases. Only two terrorism-linked judicial investigations have been opened so far, and only one person has been indicted for a terrorism offence.

Three hundred and sixty-one home arrests have been imposed, targeting, among others, environmental activists and people acquainted with the far-left, because of the security measures taken during the COP21 summit.

Another reason for the rising popular angry towards the government is the famous "S files". Numerous people have been flagged by the police as being a threat to the “safety of the state”. Those files were used to justify the police search. Yet, according to the CCIF “they are vaguely and arbitrarily set up. They include 16 levels of seriousness. If they were properly established, we wouldn’t have had so many failures during the searches.”

Concerned about the matter, the Human Rights League (HRL) started a petition, already signed by 333 NGOs, calling for the end of the state of emergency. According to Francoise Dumont, president of the HRL, those exceptional measures were not necessary. “Sure, the police found arms and drugs, but police searches are already allowed within the common law [so there is] no need to resort to the state of emergency. When it comes to terrorism, the state of emergency appears to be ineffective,” she told MEE.

Other things have caught the attention of legal experts, such as the insidious drift from the concept of proven “danger” to public safety, toward the notion, much more foggy and problematic, of “threat”. Legal analysts have also criticised the vague definition given to the term “radicalisation”. For instance, a note from the Ministry of National Education sent to the local education authorities of the Loiret department mentioned that students’ parents who were “too much religiously dressed” should be reported. At Orly airport, some security employees were sent back home for “having beards that are too long”.

With all those testimonials slowly emerging, the CCIF published a small legal guide to help them out. “We advise them [the subjects of searches] to ask for the reason for the search and to not hesitate to challenge home arrest decisions. Three lawyers have been hired, we have a support desk during the weekends, and we have been dealing already with 77 cases to seek redress” - in vain so far, noted Yasser Louati.

State of Emergency or emergency of the state?

Following the shocking Paris attacks of 13 November, it was easy to pass repressive laws in the name of a so-called “fight against terrorism". But the question remained in finding the right balance between the desire to be safe and the necessary protection of the rule of law.

According to Asif Arif, a Parisian lawyer, “The fact that the government passed measures that are restrictive in order to maintain public order is totally understandable. I would not have been shocked by a two-week or one-month extension of the state of emergency. But three months, it is totally disproportionate. The war is occurring in Syria, not in France,” he told MEE.

“The state of emergency cannot be a long-term state. The problem is that the more we use it, the more difficult it will be to get out of it. No one wants to take that political risk,” HRL president Dumont said to MEE.

However, according to Yasser Louati, the current political line is simple: “No one is criticising the state of emergency. We are having the Muslim citizens pay for the failures of the State, who failed to protect its own citizens. The State needs a scapegoat to prove that it is doing something. It has launched a security machine that is overwhelming it now.”

Moreover, the law of 3 April 1955 that was used by the government of Prime Minister Manuel Valls to set up the state of emergency was established under colonial pretenses.

According to Olivier Le Cour Grandmaison, an historian, this law “has its roots in the colonial era, it had been adopted during the framework of the Algerian War. This law was first applied in France after the November 2005 riots. It was hardened after the Paris attacks. This is the evidence of the making of a police state.

“Besides, there’s a clear will to take over ideas belonging to the extreme right. This is a pure political move in order to get the people to believe that the government has acted efficiently, and to avoid any criticism of alleged permissiveness”, Grandmaison told MEE, adding that Spain did not declare a state of emergency after the al-Qaeda attacks in Madrid on 11 March, 2004, nor did Great Britain after the bombings in London on 7 July, 2005.

* The surname has been removed to preserve the privacy of the source.

This article was originally published on MEE's French page.