On 9/11 anniversary, national security experts call on western governments to prosecute and repatriate citizens held in camps in Syria and Iraq to avoid repeating history Top former US and UK national security officials warned on Wednesday that conditions at detention camps in Syria and Iraq are ripe for an Islamic State (IS) group resurgence, and called on western governments to prosecute and repatriate their citizens to avoid paying “a huge price” later.

'By prosecuting militants and their enablers, the West will reveal these people for the violent criminals they are'

In an open letter released on the 9/11 anniversary, the signatories - including former heads of counterterrorism at MI6 and the US National Security Council - focused on the al-Hol camp in Syria. Some 68,000 people, including wives and children of IS fighters alongside people displaced in the fighting, are being detained in al-Hol in conditions the statement described as "apocalyptic".

Al-Hol is the camp where British teenager Shamima Begum, who left the UK when she was 15 to join IS in Syria, turned up heavily pregnant in February, saying she wanted to come home - and sparking a debate over whether she should be repatriated.

Most western countries, including the UK, have refused to take their citizens back and some, like Begum, have had their citizenship stripped. According to the UN, around 14 percent of those held at the camp - or just over 9,500 - are from countries other than Syria and Iraq.

Around two-thirds of the detainees overall, the letter points out, are under the age of 12.

“We do not expect terrorists to attract much sympathy. But the majority of detainees are not terrorists. They are children,” the letter says. “Children [at al-Hol] routinely die of malnutrition and hypothermia. Education, medical care and trauma counselling are practically non-existent. Extremist [indoctrination] is rife.”

It’s these types of conditions, the signatories write, which brought about the Taliban, al-Qaeda and IS in the first place. “The core membership of the Taliban … were students at extremist madrassas in Pakistani refugee camps, every bit as squalid as al-Hol. Around the same time, a number of Arab countries prevented the return of their citizens who had fought the Soviets in Afghanistan,” the letter said.

“Later, following the US-led invasion of Iraq in 2003, prolonged detention of Salafi-jihadists and Baathists brought together some of the key elements that would form ISIS,” it added, using an alternative acronym for IS.

The letter urges western governments to initiate investigations into their own citizens who are being held at al-Hol and other camps, enact any laws needed to deal with the issue and repatriate them “with a view to prosecution or rehabilitation as they deem appropriate and secure”.

“By prosecuting militants and their enablers, the West will reveal these people for the violent criminals they are - not the martyrs they claim to be - while at the same time showing that democratic states are capable of delivering justice,” the letter said. 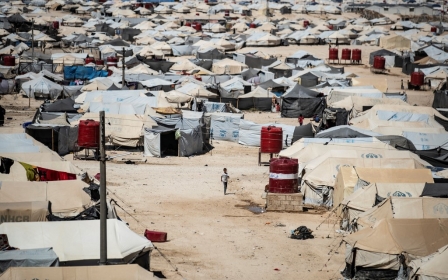