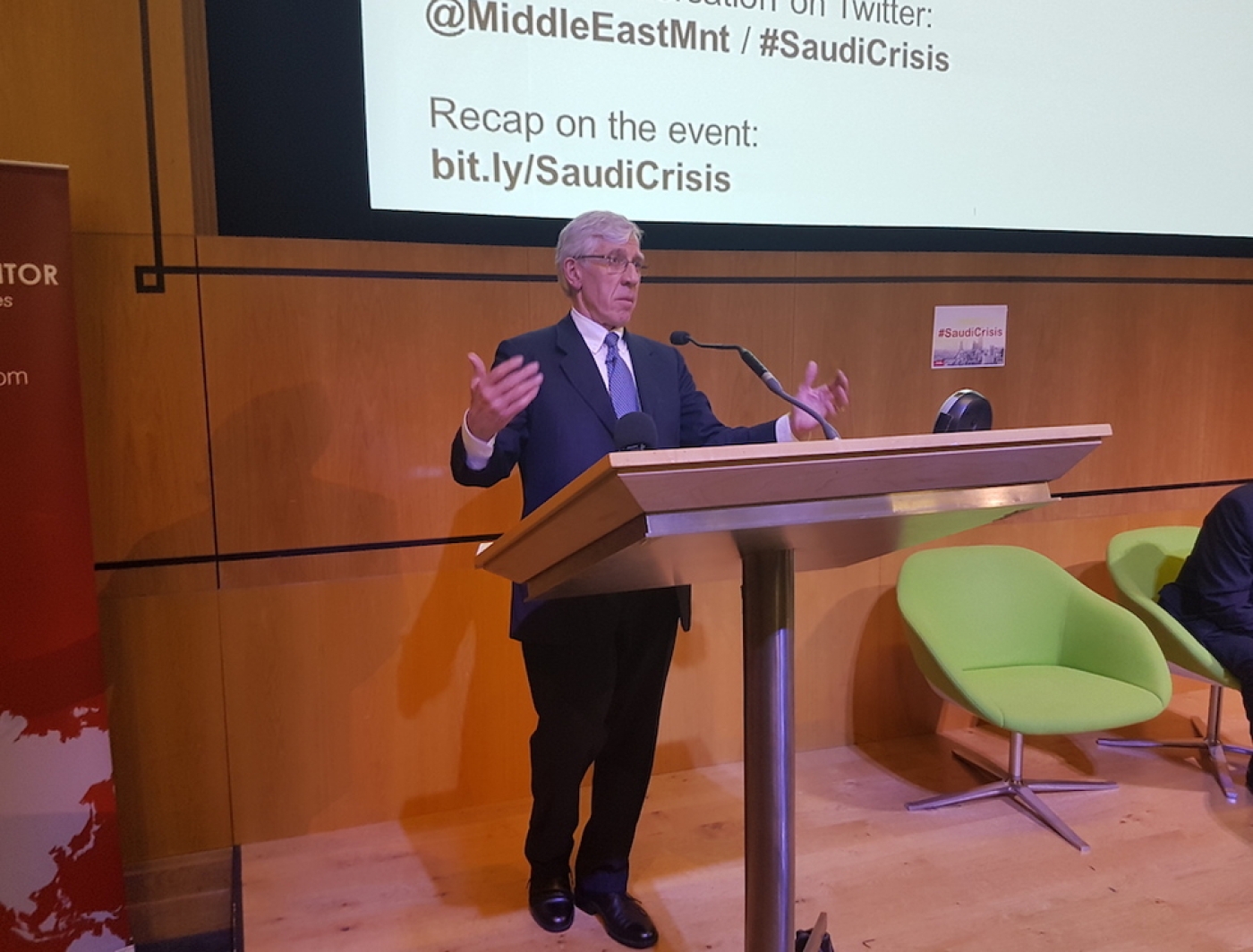 Former UK foreign secretary Jack Straw has warned that Saudi Arabia poses a "threat" to stability in Lebanon unless calmer heads prevail in the kingdom.

"The generation I dealt with were much more cautious," he said, referring to his 2001-06 period in office, which was marked by the ill-fated Iraq war and allegations over extraordinary rendition of terror suspects. "They were much more cautious when it came to the social environment in Saudi Arabia. ... Saudi foreign policy could end up as a threat in Lebanon unless wiser council prevails."

According to @thetimes #MBS puts pricetag of 100 Billion dollars on his cousin's freedom#SaudiPurge #Agrabahhttps://t.co/W5sZwX3YZS

The kingdom has repeatedly warned of the threat posed by the Iran-backed Hezbollah group in Lebanon, with that organisation subsequently accusing Saudi of having "declared war" on the country.

Saudi Foreign Secretary Adel al-Jubeir retaliated by describing Hezbollah's presence in Lebanon's government as an "act of war". On 10 November, Saudi called on its citizens to leave Lebanon.

Straw cited Israel's ill-fated invasion of Lebanon in 2006 as a warning against the consequences of major regional powers intervening in the country.

Straw, who was involved in negotiations over Iran's nuclear programme in the early 2000s, also said that there had to be an acceptance of Hezbollah's role in Lebanese politics. "Hezbollah as a political force is a reality in the Lebanon," he said.

It is important to push for negotiations when dealing with international crises, he said, citing the boycott of Hamas in Gaza by foreign governments as a failure in this respect.

"I am unhappy about our boycotting of Hamas. I talked off the record to some journalists in Riyadh in early 2006 and said we ought to be talking to Hamas," he said.

He added that "some people say I was removed from the post of foreign secretary" because of these comments.

Early on Saturday, Lebanese leader Saad Hariri landed in Paris after nearly two weeks in Saudi Arabia, where he has stayed under mysterious circumstances since his shock resignation as Lebanon's prime minister earlier this month.

Before arriving in France, Hariri tweeted that it was "a lie" that he or his family had been held in the kingdom against their will.

Western diplomats, particularly the French, who have a longstanding relationship with Lebanon, worked overtime, flying into Riyadh for meetings with Saudi officials, raising concerns over Hariri's well-being.

In his tweet, Hariri referenced the German Minister of Foreign Affairs Sigmar Gabriel, who asked publicly whether Hariri was being held. " I am on the way to the airport Mr Sigmar Gabriel," Hariri tweeted.

In his original resignation speech, Hariri, who has long had business and personal ties to Saudi Arabia, said that he was leaving office because of the over-weaning influence that Hezbollah and Iran exercise in Lebanon.

Lebanese President Michel Aoun, who is seen as close to Iran, has accused Saudi Arabia of detaining Hariri and forcing his resignation.

The latest development in the Lebanese leadership crisis has come two weeks into a whirlwind of arrests and asset-freezing that has seen Crown Prince Mohammed bin Salman (MBS) assert his rule over Saudi Arabia.

At the MEMO conference on Saturday, Madawi al-Rasheed, a Saudi opposition campaigner and visiting professor at the Middle East Centre at the London School of Economics, warned that there were few left in Saudi who could oppose MBS's power grab.

"Nobody in the history of SA [Saudi Arabia] has amassed so much power and control over insitutions like MBS has been able to do," she told the session.

Although MBS and others have characterised the crackdown, which has seen dozens of princes and businessmen arrested and kept under house arrest in the Ritz-Carlton in Riyadh and elsewhere, as an anti-corruption campaign, Madawi said this should be taken with a pinch of salt.

"Of course, this is a great PR initiative because all of us - including us in this room - we'd love to see those corrupt people behind bars, but his [MBS'] anti-corruption purges take place in an opaque kingdom with no freedom of expression, with no independent judiciary," she said.

"So those of you who are journalists, before you hail these reforms as the greatest in Saudi history, please stop and think about the context in which these purges are taking place."

She said that the long-term reforms, known as Vision 2030, being pursued by MBS were popular among young Saudis who want to see a modern capitalist economy created in the kingdom.

"It's almost like a phantasmagoria, an illusion that everyone is buying into - not only young Saudis who haven't actually been given the jobs they want, but it is a sort of glamorous world of technology, modernity that the society itself is desperate for, thinking it will get the jobs, especially the youth," she said.

Rasheed pointed out that the kingdom had some of the world's highest youth unemployment, "almost equivilent to Gaza, which is under occupation".

Since becoming deputy crown prince (and later crown prince) in April 2015, Mohammed bin Salman has pushed to become the key decision-maker in the kingdom, supplanting his father, the current King Salman.

He is seen as the main driving force behind the Saudi-led coalition's military intervention in Yemen, originally launched in March 2015, which aims to supress Houthi rebels, who the Saudis claim are backed by Iran.

The war has so far seen at least 10,000 people killed and the country pushed into a humanitarian crisis.

Straw spoke in scathing terms at the MEMO conference about Saudi's actions in the war.

"The key cause of the humanitarian crisis in Yemen is the blockade and the bombings by the Saudis and the UAE," he said.

He warned that "as long as Saudi thinks that major Western countries are going support whatever they do, regardless, they're" going to keep doing what they're doing.

Still, Straw stopped short of calling for the UK to block arms sales to the kingdom.

"I wouldn't support a total freeze, but I would go on a case-by-case examination of the arms sales we made," he said, in response to a question about a possible ban.