Reports of botched rescue in Greece come as UN says 2,500 people have drowned in the Mediterranean this year 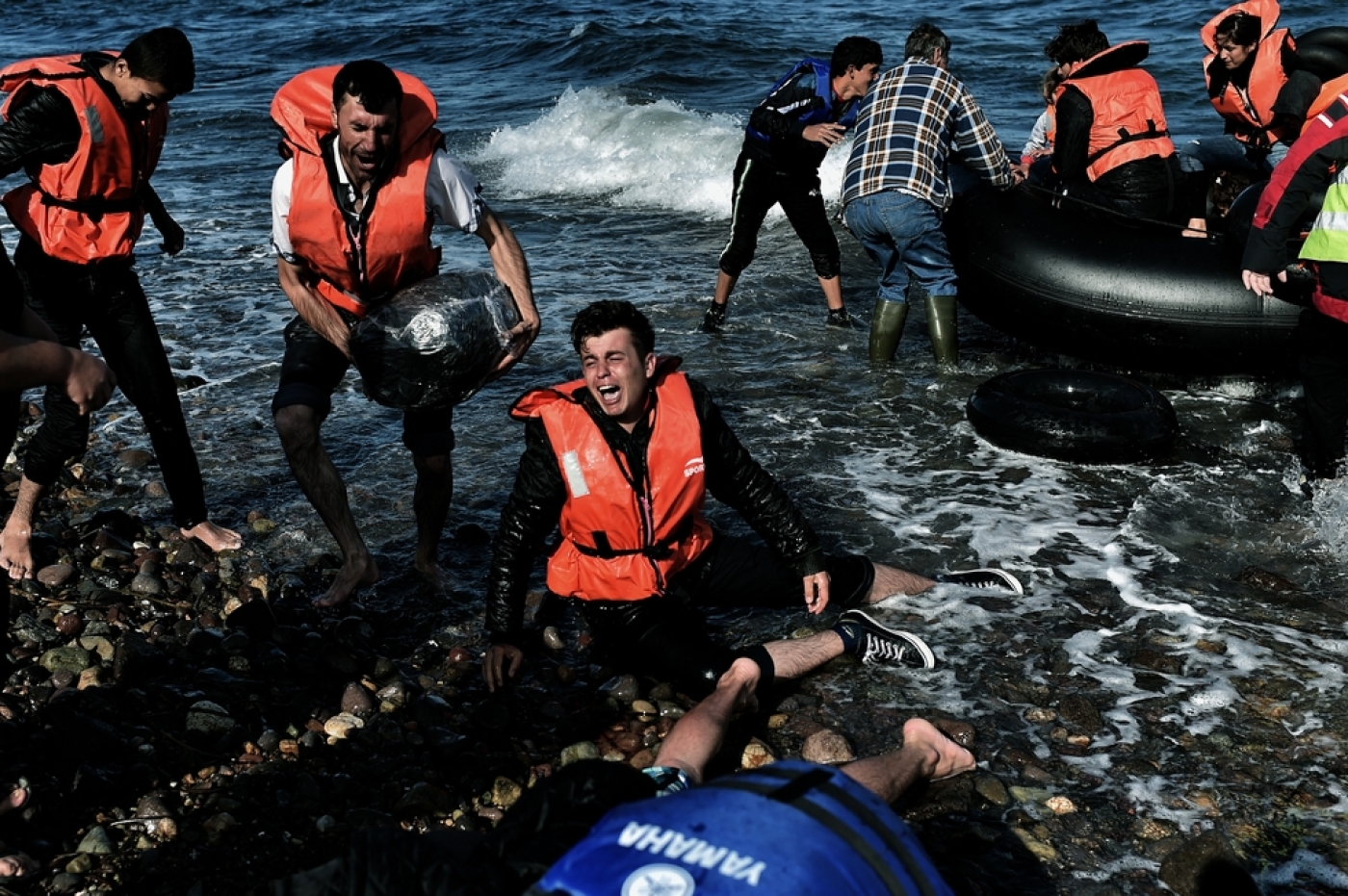 LESBOS, Greece - Frontex denied aid to refugees including a baby and kept them floating in the sea off Greece for nearly two hours, according to aid workers.

Eyewitnesses told MEE that Frontex officers prevented aid workers helping 50 people as they landed on the northern shore of the Greek island of Lesbos early on Monday.

Their tactic was to take them directly into detention "without any aid, even the injured," one aid worker said.

Witnesses also told MEE that officers from the Maltese branch of the European border control police prevented a doctor tending to a baby that was "unresponsive".

In a written statement to MEE, Frontex said the crew on the Maltese ship had followed a Hellenic Coast Guard officer's instructions and that none of the volunteers identified themselves as a doctor.

The reports come as the UN says that more than 2,500 people have died trying to make the perilous journey across the Mediterranean to Europe so far in 2016, a sharp jump from the same period last year. In the past week alone, at least 880 people are believed to have died in a series of shipwrecks - but thousands of people have also been rescued in the last seven days, with some 90 rescue operations launched.

Frontex, supported by a series of national fleets and coast guards as well as several NGOs and some private volunteers, is charged with carrying out rescue operations in the Mediterranean.

However, witnesses told MEE that the boat crammed with refugees was made to float out at sea until Frontex ground units came to take the passengers away in buses, after the Greek coastguard granted permission for the landing at the fishing hamlet of Skala Skiaminias on Lesbos's north coast.

Esther Camps, from Spanish NGO Proactiva, which provides aid and rescue operations at sea, was at the scene. She said the incident took place at around 01:00 on Monday morning - the arrivals, she said, included around 10 children, as well as women who were crying out for help.

"We were told to do nothing and to 'stay away',” she told MEE.

"As they [the refugees and migrants] were disembarking, we saw there was a baby that was not making any noise. One of the officers said the baby was 'fine' and kept us away. We said, 'how do you know it is OK? You are not doctors.'"

Camps, who has been working with Proactiva since December, said that babies normally cry when they are brought ashore, but that in this case the child was not making any noise.

MEE understands that a doctor from the aid organisation Waha was also at the scene but was denied access.

"The baby was not responding and a doctor tried to approach - he was very anxious to see the child but was pushed away," said Iasonas Apostolopoulos, from the aid organisation Platanos.

The doctor declined a request for interview, but Waha has since confirmed to MEE that the baby survived and that all those rescued were taken to Moria camp in Frontex buses.

The child's sex and nationality remain unknown, but most of the refugees and migrants were believed to be from Afghanistan, Pakistan and Eritrea.

Apostolopoulos said that police formed a line to prevent emergency aid being administered once the refugees were brought ashore.

"The people were soaking and some were without shoes. There was one injured man with two other people supporting him," he said. "The cops formed a human chain to keep [around seven of] us away from them."

He said that they couldn't distribute "anything" until the police chain broke up during the 300 metre uphill walk to the waiting buses that would transport the new arrivals to the Moria detention centre.

"They told us that these people are prisoners and have been detained, and that we [the police] are accountable for them."

UNHCR's spokesperson on Lesbos would not comment on specific reports that the agency's officer, who was present at the scene, had also been barred from speaking to the arrivals.

But he did say: "I have been following communications and it does not appear that there was a serious incident related to UNHCR being denied access to its work, or one that requires investigation."

On Monday, a photograph of a migrant baby who drowned in the Mediterranean between Libya and Italy was distributed by a humanitarian organisation in hopes of persuading European authorities to ensure safe passage to migrants, more than 200,000 of whom have already crossed into Europe since the start of the year.

Although arrivals in Greece have declined since the introduction of a refugee deal between the EU and Turkey in March, several hundred people a week are still making the journey.

The arrivals on Lesbos on Monday night mean that more than 200 people have landed on the island in the past 10 days, according to the latest UNHCR figures.

The UNHCR's spokesperson on Lesvos said that since the refugee exchange deal between the EU and Turkey came into force in March and the facility in Moria turned into a closed camp, Frontex and the Greek coastguard have taken over emergency aid and transportation provision.

"Since 20 March, the UNHCR has discontinued services and it is up to Frontex and the coastguard to bring people in and provide transport," the spokesperson said.

Apostolopoulos said that since the introduction of a deal that sees unsuccessful asylum seekers who arrive in Greece deported back to Turkey, it has been difficult to provide aid.

"Everything started after the EU agreement," he said. "These people are no longer refugees to them [the authorities]. They are prisoners and are being detained. But they have left the humanitarian aspect out of the story."