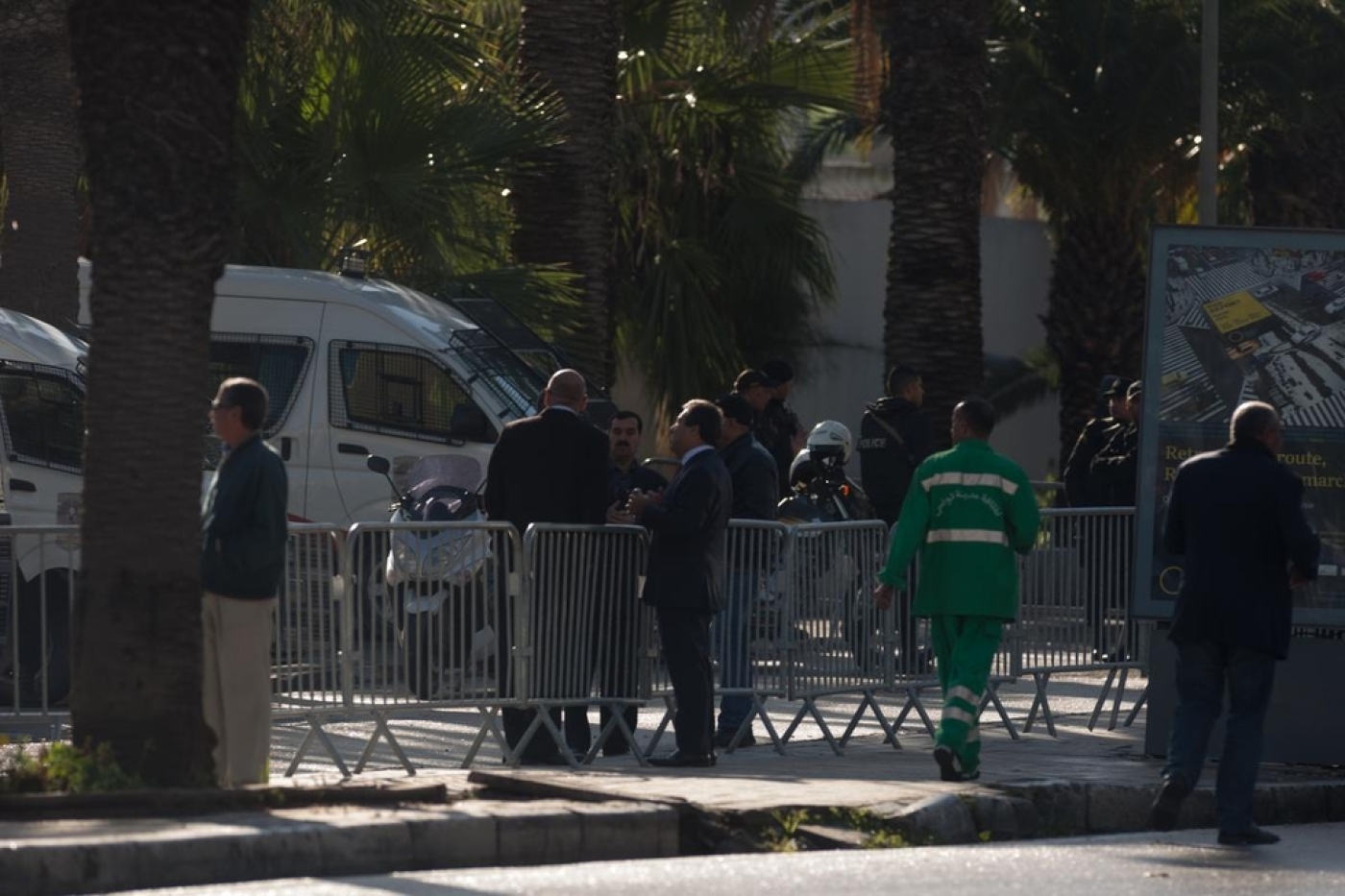 : Tunisian security forces inspect the area after bomb exploded in the capital of Tunisia on Tuesday near a police car belonging to the Tunisian presidency in Tunis, Tunisia on 25 November 2015 (AA)
By
AFP

Petrol prices spiked, shops closed and trucks that plied the desert to Libya have vanished since Tunisia shut the border following a deadly bus bombing in the capital.

In the town of Ben Guerdane, and across southeastern Tunisia, the mood is morose with residents concerned for their future since authorities imposed the 15-day border closure last week.

The decision was taken as part of security measures following Tuesday's suicide bombing that killed 12 presidential guards in Tunis, which was claimed by the Islamic State group.

Authorities say the attack, like two others this year claimed by IS, was planned in Libya where the militant group has exploited chaos that spread since the 2011 revolution to gain a presence.

"The terrorists attack in the centre of the capital, 200 metres (yards) from the interior ministry, and we 600 kilometres (370 miles) away must pay the price," said Nejib, a teacher, in Ben Guerdane.

According to him, the first sign of trouble came when fuel prices surged.

"On Wednesday 20 litres of petrol cost 6.5 dinars (less than three euros) and on Friday 20 dinars (nine euros)," he said.

Ben Guerdane and the surrounding region depend on black market trade with Libya, where smugglers also benefit from lawlessness that spread since the revolution that toppled and killed dictator Muammar Gaddafi.

The closure of the border for nearly a month in 2014 following differences between the two neighbours had fuelled tensions in Ben Guerdane, with protests and strikes.

"We are all against terrorism but this is not a solution. And after the 15 days, what's going to happen?" asked Abdelfattah, who deals in contraband petrol and electrical appliances.

Tunisia' secretary of state for national security, Rafik Chelly, has said that the border closure is a "temporary" measure to give authorities time to mull what they should do next.

He did not rule out a decision to impose entry visas on Libyans.

"That would mean the end of an era and the region's slow death," said Hassen, a resident of Ben Guerdane.

The border area has also been a haven for Libyans who fled their country's conflict in huge numbers and continue to travel across the frontier to escape violence.

Many Tunisians from the region have for years also worked across the border in the oil-rich North African nation, and an indefinite border closure could spell doom.

So far the Ras Jadir crossing is open only to Tunisians wanting to return home and Libyans wishing to leave.

Ali Ouni, a local labour official, said nothing else goes through, certainly "no merchandise and not even ambulances".

One Tunisian working in Libya, Brahim, said he preferred to play it safe then potentially be stuck in Libya.

So he stuffed some belongings in a big bag and rented a car for his return to Tunisia, without even waiting to get his pay cheque, he said after making it through the crossing point.

Nearby Azzouz, a Libyan from the town of Zwara, was trying to persuade a Tunisian border guard to let him cross over to his hometown to get some money.

"He said that if I go I will not be able to return to Tunisia before 15 days," he told AFP. "I prefer to stay and wait." Women
Beneath veneer of progress, sexual assault common in Tunisia