How Palestinians pay with their lives in Netanyahu's war for survival

The mafia-style behaviour of his cronies, the anti-Arab incitement, this week’s bombings of Gaza and Damascus. To keep the prime minister in power, anything goes 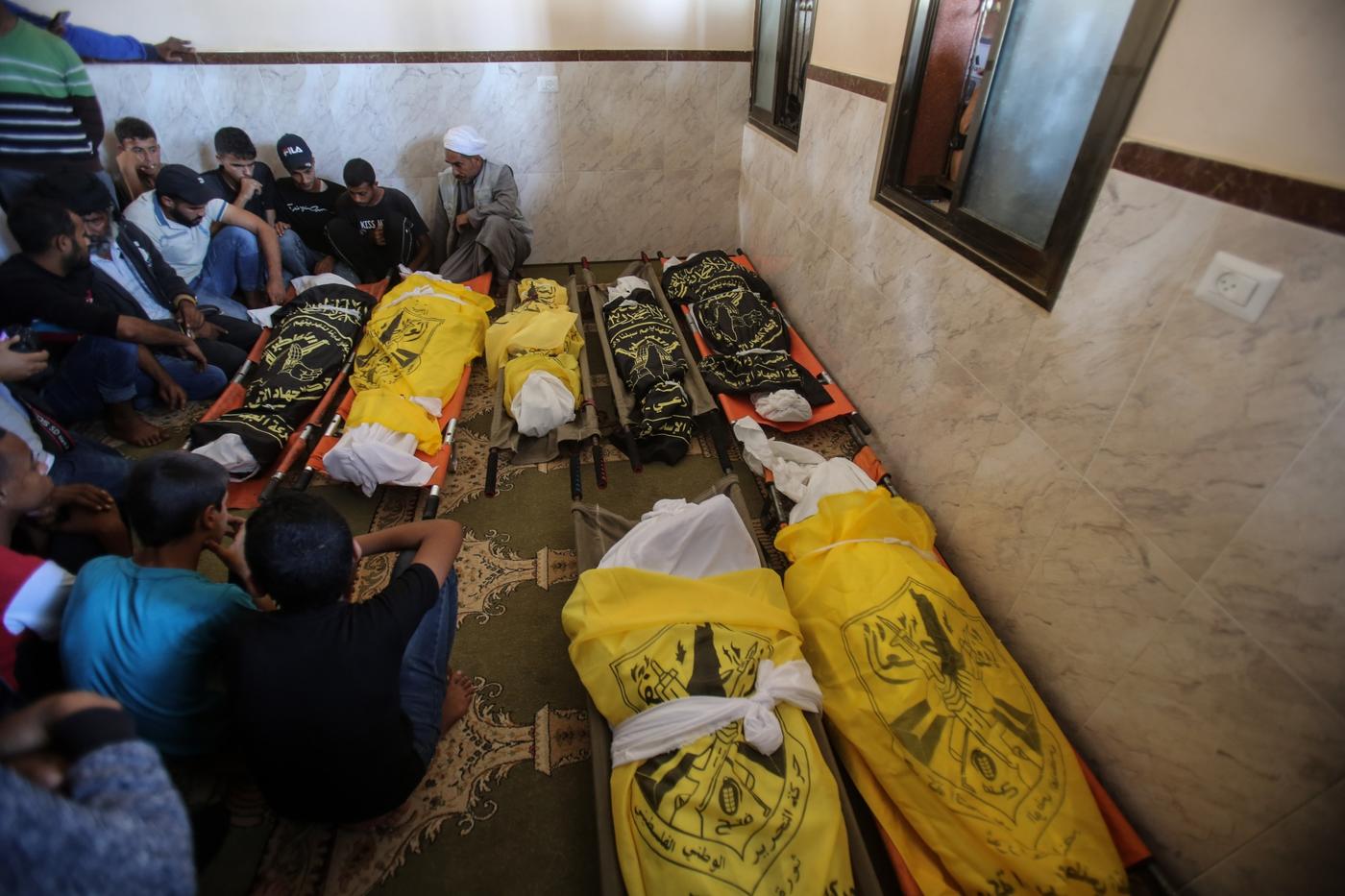 Two days of fighting killed 34 Palestinians, including women and children, and no Israelis (MEE/Mohammed al-Hajjar)
By
Meron Rapoport
in
Tel Aviv

You can connect the dots in a straight line between all of these:

Mafia-style behaviour, lawless acts, incitement against opponents - both Jewish and Arab - and now a deliberate attempt to ignite a military conflagration posing a mortal danger to the lives of Palestinians and Israelis. And all with one goal: to keep Netanyahu on Balfour Street by whatever means necessary.

This latest “round” left at least 34 Palestinians in Gaza dead – including eight members of the same family – and 111 wounded by the time the ceasefire came into effect early on Thursday. But there may very well be more to come.

It’s easy to say that Netanyahu and his cronies are doing all of these things for personal gain in order to continue enjoying the perks of being in office. Ruling is certainly pleasant, and getting your cigars and champagne free instead of paying full price is even more pleasant. But something deeper is at work here.

For him, not being prime minister means no longer being Benjamin Netanyahu

What Jabotinsky didn’t manage to do, and what Netanyahu’s father Benzion was prevented from doing, is his task to complete.

People have, justifiably, mocked a recent remark by Netanyahu’s son Yair when he said that Israel, before his father took over running it, was a primitive state that exported only oranges. But critics are missing the point: it is not about facts. It is about what young Netanyahu hears at home: l’etat, c’est moi on steroids.

His father and the state of Israel and the Jewish people are all one.

For him, not being prime minister means no longer being Benjamin Netanyahu. Even if he is offered a plea deal, Netanyahu cannot see himself retiring to write his memoirs and collect hundreds of thousands of dollars in lecture fees. It would be a betrayal of the task he has set himself - that of the saviour.

From Netanyahu’s perspective, not being prime minister isn't an option. Not just because he knows that the moment he leaves Balfour Street he is going to trial and then most likely to jail. Undoubtedly, that fear is bone-chilling, but there is an even greater fear.

All of the gifts he has received and all of the pressure he brought to bear – unlawfully, according to the indictments – on the media to cover him more favourably, become justifiable in light of this sense of mission. Shall history’s emissary be put in the dock over a few cigars?

But the last elections, both in April and even more so in September, have shown that voters in Israel are not really buying this story from Netanyahu. They do not see him as history’s emissary. Most of them, represented by 65 Knesset seats, do not want him as prime minister.

Worse yet, his main adversary, Benny Gantz, has not ruled out “going with the Arabs” to form a minority government supported by the Joint List. This would lead not just to Netanyahu’s egress from Balfour Street but also to the utter erasure of his whole legacy, built as it was on negating any place for the Palestinian people between the Jordan River and the sea, in the West Bank and in Gaza, as well as within the sovereign borders of Israel.

Passage of the Nation-State Law, enfeebling the stature of Palestinian President Mahmoud Abbas and the Palestinian Authority – these are the capstones of that legacy. These are the origins of all the recent escalations by Netanyahu and company.

But the Jewish public has not been sufficiently moved. True, the pro-Netanyahu Petah Tikva protests have grown larger in the last few weeks and are becoming more aggressive, but they still involve only a few thousand demonstrators.

For the present, at least, most of the Israeli streets remain fairly indifferent to Netanyahu’s efforts at survival. The ones pitching in to help the cause, according to Naftali Bennett, are voters for what’s known as the national-religious camp, a bloc of small far-right parties who support Israel’s settlement project.

Not coincidentally, Yamina – an alliance of right-wing parties that won only seven seats in the last election and two of whose leaders, Bennett and Ayelet Shaked, failed to pass the electoral threshold in April – has three ministers in the government and the cabinet.

This explains how Amit Segal, a senior political commentator for Channel 12 and a prominent figure in the national-religious camp who was born on a settlement to a father who participated in terror attacks against Palestinians, was enlisted by Netanyahu’s defence team, risking and possibly destroying his stature as a right-wing political commentator.

This is also what was behind Bennett’s Facebook post last month in which he said: “If the judicial system succeeds in toppling Netanyahu, it will be a fatal blow to the entire national camp.”

Bennett, like Segal and Bezalel Smotrich and many other well-known national religious figures, are at the very least deeply concerned about any government not led entirely by Netanyahu.

They can foresee losing their special status - completely disproportionate to their political heft - that they have enjoyed for a decade under Netanyahu; especially in the last government.

But he also does not count the Israelis and Palestinians who are liable to pay with their lives for another round of this violence, launched entirely at Israel’s initiative

Thus, every other consideration is sidelined. Preserving the Netanyahu legacy, first and foremost the perpetuation of Jewish supremacy, takes precedence over everything else.

Almost every political pundit and evidently most Israeli citizens as well, even among supporters of the rightist parties, understand that the decision to kill Abu al-Atta - which was not a response to any fresh attack - along with the resumption of the “targeted assassination” policy after an interlude of five years, is first of all a political decision intended to make it tougher for Benny Gantz to even contemplate the formation of a minority government supported by the Joint List.

That this came at the cost of the lives of Abu al-Atta’s wife and al-Ajouri’s son is not factored into the equation at all, neither by Netanyahu nor by the overwhelming majority of Jews in Israel.

But he also does not count the Israelis and Palestinians who are liable to pay with their lives for another round of this violence, launched entirely at Israel’s initiative.

Nor does he count the damage caused to ordinary life in Gaza and in Israel either. For the first time since the Gulf War in 1991, schools in greater Tel Aviv were closed - and not for a holiday.

This latest provocation may have wound down within a few days, but what will happen if it isn’t enough, if the systemic disruption launched by Netanyahu fails to derail the train on which his opponents seek to ride him out of town?

Netanyahu, evidently, does not intend to give in. Success is uncertain and the terrain ahead is dangerous. Analysis
King Bibi: The ruler who lost his kingdom